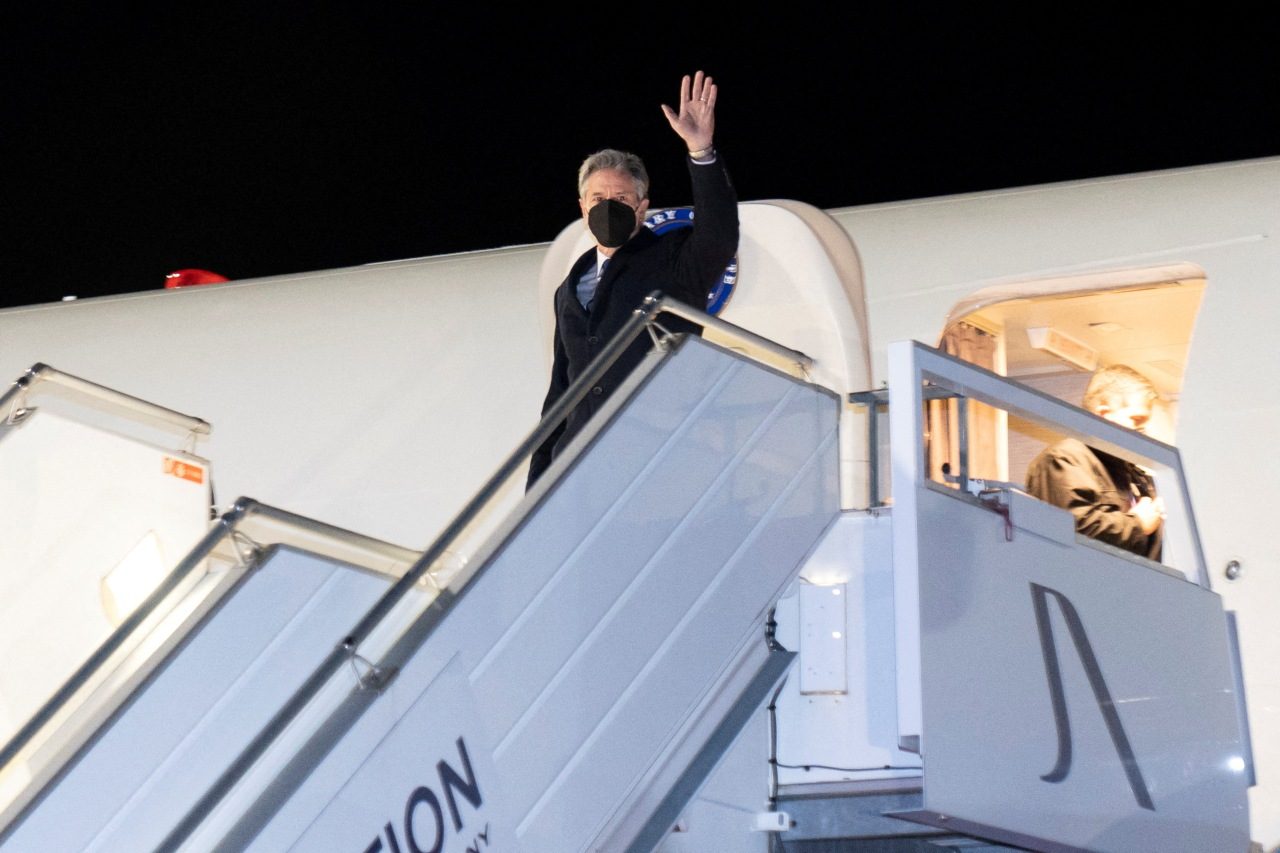 ARRIVAL US Secretary of State Antony Blinken waves as he arrives at Geneva Airport, in Geneva, Switzerland, on January 20, 2022.

Facebook Twitter Copy URL
Copied
(1st UPDATE) 'You're right: We don't expect to resolve our differences here today. But I do hope and expect that we can test whether the path of diplomacy, of dialogue remains open,' says US Secretary of State Antony Blinken

GENEVA, Switzerland – The top Russian and US diplomats played down any prospect of resolving their differences over Ukraine at talks on Friday, January 21, but Washington hoped they would reduce tensions over a Russian troop buildup that has stoked fears of a new conflict.

US Secretary of State Antony Blinken shook hands with Russian Foreign Minister Sergei Lavrov in the Hotel President Wilson in the Swiss city of Geneva before talks began.

“(Our) proposals are extremely concrete and we await equally concrete answers,” Lavrov said, despite telling Blinken he did not expect a breakthrough at the talks.

Russia, which has tens of thousands of troops near Ukraine’s border and has sent troops to Belarus for joint military drills, wants NATO to promise not to admit Ukraine as a member and has urged the Western military alliance to halt eastward expansion. NATO has rejected the demands.

“This is a critical moment. You’re right: We don’t expect to resolve our differences here today,” Blinken said in his opening remarks. “But I do hope and expect that we can test whether the path of diplomacy, of dialogue remains open. We’re committed to walking that path, to resolving our differences peacefully and I hope to test that proposition today.”

Blinken said the talks should include the status of US citizens Paul Whelan and Trevor Reed, who he said were wrongly convicted of alleged crimes in Russia and should be released. The Kremlin says it does not interfere in justice matters.

Washington’s hopes of building a united front of opposition to Moscow were complicated by US President Joe Biden’s comments at a news conference on Wednesday, January 19, in which he predicted Russia would “move in” on Ukraine and said Moscow would pay dearly.

Western states fear Moscow is planning a new assault on Ukraine after sending in forces into the former Soviet republic 2014 to annex the Crimea peninsula. Russia denies planning an attack but says it could take unspecified military action if its security demands are not met.

Asked by CBS News whether Russia was intimidated by Ukraine, Deputy Foreign Minister Sergei Ryabkov said on arriving for the talks on a cold and blustery day in Geneva: “We’re not afraid of anyone, even not of the US.”

In Moscow, the Kremlin reacted coolly to a Russian parliament initiative to recognize two pro-Russian breakaway regions in eastern Ukraine as independent states, saying it was important to avoid steps that could increase tensions.

Kremlin spokesperson Dmitry Peskov said it was important not to try and score political points in such a fragile situation.

Before Friday’s meeting, Blinken swung through Europe to try to shore up US allies’ commitments to hit Russia with economic sanctions if it goes ahead with an invasion of Ukraine.

In Kyiv on Wednesday, Blinken assured Ukraine of US support. Blinken, before meeting German, French and British officials in Berlin on Thursday, January 20, said Russian President Vladimir Putin could order an invasion imminently.

Calling out what he called Russian “disinformation” aimed at destabilizing Ukraine, Blinken said on Thursday the diplomatic efforts this week meant he could present a shared view of Western nations to Russia on Friday.

But that unity appeared to be undermined by comments by Biden, who said on Wednesday that the West’s response may not be unified if Russia makes a “minor incursion” into Ukraine. The comments forced administration officials to issue clarifications but raised doubts among US allies that Washington was willing to give Putin some leeway to avert a full-scale invasion.

Ukrainian President Volodymyr Zelenskiy on Thursday sent a Tweet reminding “the great powers that there are no minor incursions and small nations. Just as there are no minor casualties and little grief from the loss of loved ones.”

Orysia Lutsevych, a Ukraine analyst at the Chatham House think-tank in London, said the Geneva meeting would give the United States the chance to clarify Biden’s comments.

“Hopefully Blinken will be able to straighten out some of this ambiguity, if he has the mandate,” she said. – Rappler.com