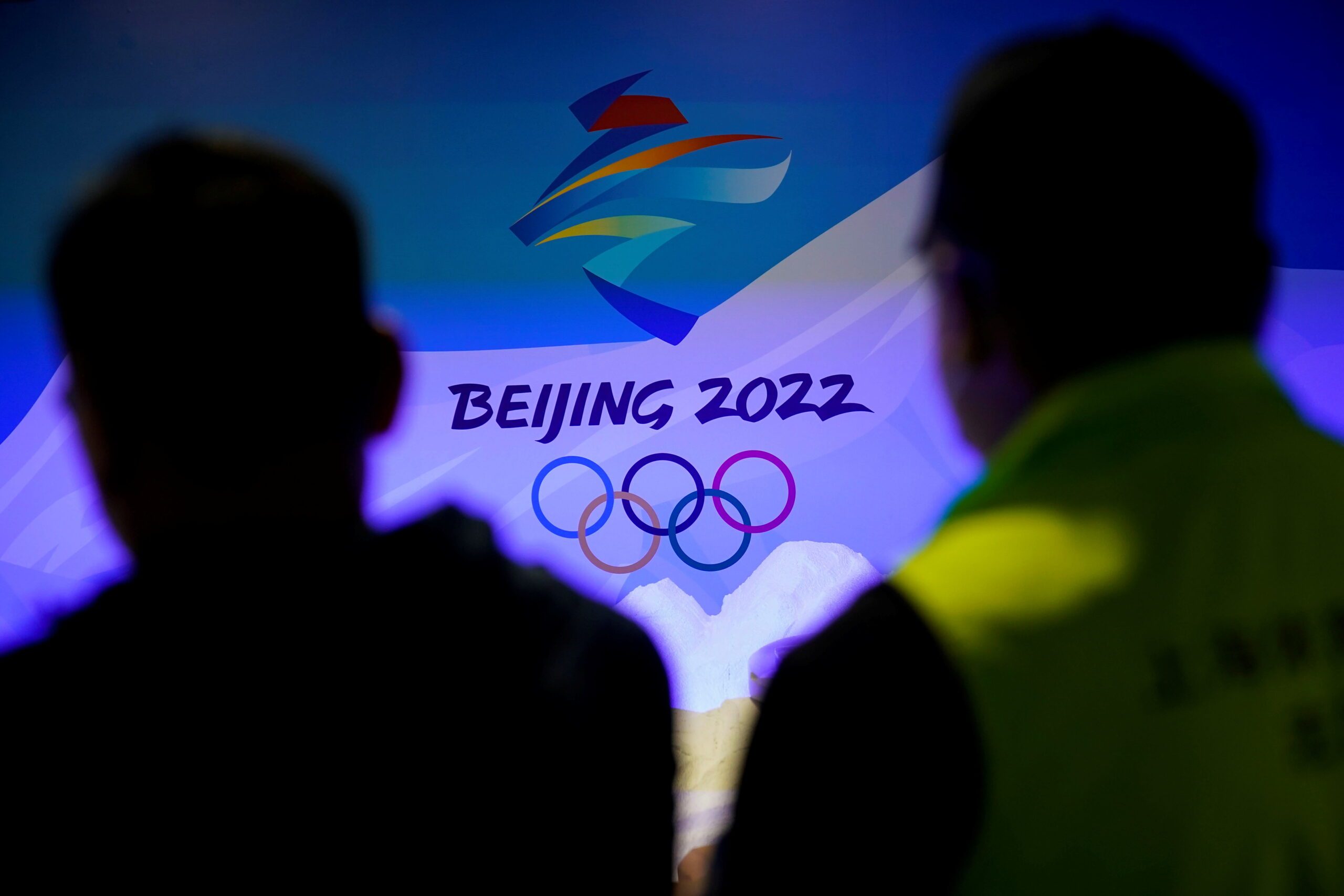 WINTER OLYMPICS. Staff members work near the emblem for Beijing 2022 Winter Olympics displayed at the Shanghai Sports Museum in Shanghai, China on December 8, 2021.

Canada joined Australia, Britain, and the United States in a diplomatic boycott of the Winter Olympics in Beijing on Wednesday, December 8, with China calling the boycotts “political posturing” and a smear campaign.

The United States was the first to announce the boycott this week, saying on Monday that its government officials would not attend February’s Beijing Olympics because of China’s human rights “atrocities,” weeks after talks aimed at easing tense relations between the world’s two largest economies.

China on Tuesday said the United States would “pay a price” for its decision and warned of countermeasures but gave no details. The International Olympic Committee (IOC) sought to play down the growing diplomatic boycott.

Canadian Prime Minister Justin Trudeau said Beijing would be aware of long-standing Western concerns about human rights in China. “(So) it shouldn’t be a surprise that we decided not to send diplomatic representation.”

Trudeau’s decision seems sure to add tension to a relationship already strained over the detention of Huawei Technologies Co Ltd Chief Financial Officer Meng Wanzhou on a US warrant.

Meng had been under house arrest in Vancouver, where she had fought extradition to the United States for almost three years on bank fraud charges. She was released and returned to China in September.

Two Canadians, Michael Kovrig and Michael Spavor, who were arrested by Beijing shortly after Meng’s 2018 detention, were also freed in September.

Almost as Trudeau spoke, IOC President Thomas Bach said the Committee had always been concerned with the participation of the athletes in the Olympic Games.

So “we welcome the support for their Olympic teams all these governments have been emphasizing,” he told a video news conference. “This is giving the athletes certainty and this is what the IOC is about.”

Asked earlier in parliament if his country would follow Washington’s lead, British Prime Minister Boris Johnson said: “There will be effectively a diplomatic boycott of the Winter Olympics in Beijing, no ministers are expected to attend and no officials.”

“I do not think that sporting boycotts are sensible and that remains the policy of the government,” he added, indicating that British athletes will still compete.

China said it had not invited British officials.

“The Chinese government has not invited government ministers or officials from the UK to attend the Beijing Winter Olympics,” a spokesman for the Chinese embassy in London said.

“Making an issue out of the presence of government officials at the Beijing Winter Olympics is in essence a political smearing campaign.”

Announcing the plans, Morrison said Beijing had not responded to several issues raised by Canberra, including the rights abuse accusations.

China has denied any wrongdoing in Xinjiang and said allegations are fabricated.

Foreign ministry spokesman Wang Wenbin said at a daily briefing in Beijing that Australian politicians were engaged in “political posturing.”

“Whether they come or not, nobody cares,” he added.

The Australian Olympic Committee said the boycott would have no impact on athletes’ preparations for the Games, which run from February 4 to 20, adding that “diplomatic options” were a matter for governments.

For the Canadian Olympic Committee (COC), a diplomatic boycott recognized the distinction between government and athlete participation while providing a platform to shine a light on China issues.

“The Canadian Olympic Committee and Canadian Paralympic Committee remain concerned about the issues in China but understand the Games will create an important platform to draw attention to them,” said the COC in a statement.

Other US allies have been slow to commit to joining the boycott, though Japan is considering not sending cabinet members to the Games, the Sankei Shimbun daily said on Wednesday, citing unidentified government sources.

“Countries’ decisions to boycott the Olympics, that’s their decision that they have to make for themselves,” said White House spokesperson Karine Jean-Pierre. “It’s up to them (other countries) to decide how they’re going to move forward, and if they’re going to boycott or not.”

The United States is set to host the 2028 Summer Olympics in Los Angeles and is preparing to bid for the 2030 Winter Olympics in Salt Lake City.

The American diplomatic boycott, encouraged for months by some members of the US Congress and rights groups, is happening despite attempts to stabilize ties with a video meeting last month between Biden and China’s Xi Jinping. – Rappler.com