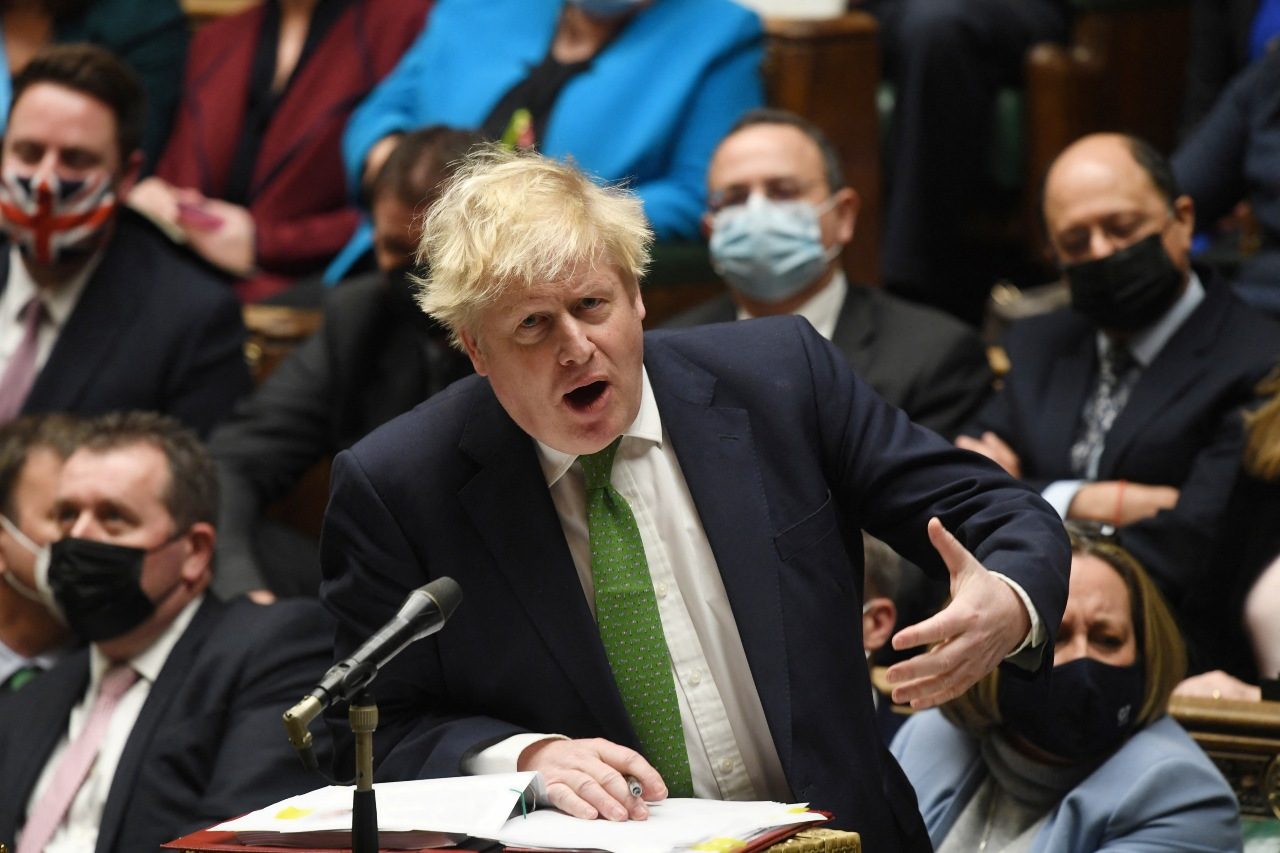 Facebook Twitter Copy URL
Copied
The threshold for a confidence vote in Boris Johnson has yet to be breached, with several Conservative lawmakers saying they will hold off from calling for one until an investigation into the lockdown-breaking parties has been completed

LONDON, United Kingdom – A senior Conservative lawmaker accused the British government on Thursday, January 20, of intimidating and attempting to “blackmail” those lawmakers they suspect of wanting to force Prime Minister Boris Johnson out of power.

Johnson, who won a large majority in 2019, is facing growing calls to step down over a series of scandals, including admitting he had attended a party at his Downing Street office at a time when Britain was under a strict COVID-19 lockdown.

Some younger lawmakers have spearheaded attempts to unseat Johnson, but it was an attack by one of the party’s longest-serving Conservatives that prompted gasps when he told the prime minister in parliament “In the name of God, go.”

Johnson, 57, has vowed to fight on, saying he would lead the Conservative Party into the next election and warning a lawmaker who defected to the main opposition Labour Party on Wednesday, January 19, that he would win back his seat.

But in yet another blow to his shaky standing, William Wragg, chair of the Public Administration and Constitutional Affairs Committee which oversees constitutional issues and standards, accused the government of blackmail.

“In recent days, a number of members of parliament have faced pressures and intimidation from members of the government because of their declared or assumed desire for a vote of confidence in the party leadership of the prime minister,” Wragg said in a statement before a meeting of the committee.

“Moreover, the reports of which I’m aware, would seem to constitute blackmail. As such, it would be my general advice to colleagues to report these matters to the speaker of the House of Commons and the commissioner of the Metropolitan Police.”

The threshold for a confidence vote in Johnson has yet to be breached, with several Conservative lawmakers saying they would hold off from calling for one until an investigation into the lockdown-breaking parties had been completed.

That investigation is being led by Sue Gray, a civil servant. The political editor for ITV said on Twitter that Gray had found an email from a senior official warning Johnson’s principle private secretary that a party on May 20 should not go ahead.

Johnson has said he attended what he thought was a work event on May 20, 2020, to which staff had been told to “bring their own booze.” Johnson said on Tuesday, January 18, nobody had told him the gathering was against COVID rules.

Wragg referred to the work of government whips, parliamentary enforcers whose job is to ensure Conservative lawmakers back government policy and stay in line.

“It is of course the duty of the government whips office to secure the government’s business in the House of Commons (lower house of parliament,” he said.

“However it is not their function to breach the ministerial code in threatening to withdraw investments from members of parliament’s constituencies which are funded from the public purse.”

The whips – a term with its roots in fox-hunting that dates back to 1742 – are widely known to use threats and sometimes offers of promotion to get lawmakers to support the party line.

But there are rules the whips must adhere to. The parliamentary speaker said: “It is of course a contempt to obstruct members in the discharge of their duty or to attempt to intimidate a member in their parliamentary conduct by threats.” – Rappler.com