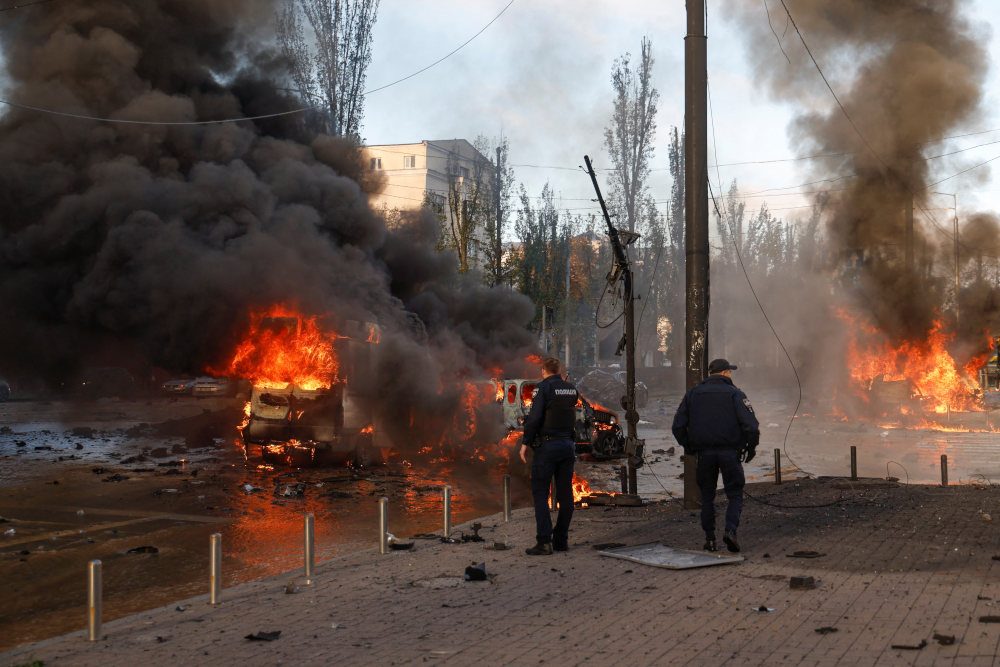 MISSILE STRIKES. Cars are seen on fire after Russian missile strikes, as Russia's attack continues, in Kyiv, Ukraine on October 10, 2022.

KYIV, Ukraine – Russia bombed cities across Ukraine during rush hour on Monday morning, October 10, in apparent revenge strikes after President Vladimir Putin declared an explosion on the bridge to Crimea to be a terrorist attack.

Missiles tore into Kyiv, the most intense strikes on the capital since Russia abandoned an attempt to captured it in the early weeks of the war.

The body of a man in jeans lay in a street at a busy intersection, surrounded by flaming cars in the aftermath of the attack. A soldier cut through the clothes of a woman who lay in the grass to try to treat her wounds. A huge crater was ripped in the mud next to a playground in a central Kyiv park.

Explosions were also reported in Lviv, Ternopil and Zhytomyr in Ukraine’s west and Dnipro and Kremenchuk in central Ukraine.

“They are trying to destroy us and wipe us off the face of the earth…destroy our people who are sleeping at home in Zaporizhzhia. Kill people who go to work in Dnipro and Kyiv,” President Volodymyr Zelenskiy said on the Telegram messaging app.

“The air raid sirens do not subside throughout Ukraine. There are missiles hitting. Unfortunately, there are dead and wounded.”

A witness later reported a blast in Russia’s Belgorod region near the border.

At one of Kyiv’s busiest road junctions, a massive crater had been blown in the intersection. Cars were destroyed, buildings were damaged and emergency workers were on the scene. Two cars and a van near the crater were completely wrecked, blacked and pitted from shrapnel.

Windows had been blown out of buildings at Kyiv’s main Taras Shevchenko University. National Guard troops in full combat gear and carrying assault rifles were lined up outside an education union building.

“The capital is under attack from Russian terrorists! The missiles hit objects in the city centre (in the Shevchenkivskyi district) and in the Solomyanskyi district. The air raids sirens are going off, and therefore the threat, continues,” mayor Vitali Klitschko posted on social media.

“The central streets of Kyiv have been blocked by law enforcement officers, rescue services are working.”

The strikes follow the explosion which damaged the only bridge over the Kerch Strait to the Crimea peninsula, which Putin on Sunday called “an act of terrorism aimed at destroying critically important civilian infrastructure”.

“This was devised, carried out and ordered by the Ukrainian special services,” he said in a video on the Kremlin’s Telegram channel.

Ukraine has not claimed responsibility for the blast on the bridge but has celebrated it. Senior Russian officials demanded a swift response from the Kremlin ahead of a meeting of Putin’s security council on Monday.

The bridge is a major supply route for Russian forces in southern Ukraine and a symbol of Russia’s control of Crimea, the peninsula it proclaimed annexed after its troops seized it in 2014.

Russian Security Council Deputy Chairman Dmitry Medvedev said ahead of the meeting that Russia should kill the “terrorists” responsible for the attack.

“Russia can only respond to this crime by directly killing terrorists, as is the custom elsewhere in the world. This is what Russian citizens expect,” he was quoted as saying by state news agency Tass.

Alexander Bastrykin, the head of Russia’s Investigative Committee, said on Sunday a vehicle had exploded on the bridge, having travelled through Bulgaria, Georgia, Armenia, North Ossetia and Russia’s Krasnodar region.

Ukrainian Foreign Minister Dmytro Kuleba tweeted: “Putin’s only tactic is terror on peaceful Ukrainian cities, but he will not break Ukraine down. This is also his response to all appeasers who want to talk with him about peace: Putin is a terrorist who talks with missiles.”

In southeastern Ukraine, Russian shelling overnight destroyed another apartment building in the city of Zaporizhzhia, regional Governor Oleksandr Starukh said early on Monday. At least one person died and five where injured in the attack, a city official said.

The pre-dawn strikes were the third Russian missile attack against apartment buildings in the city in four days. The city, which Russian forces never captured, is the capital of one of four partially occupied regions Russia claims to have annexed this month.

Russia has faced major setbacks on the battlefield since the start of September, with Ukrainian forces bursting through the front lines and recapturing territory in the northeast and the south.

Putin responded to the losses by ordering a mobilization of hundreds of thousands of reservists, proclaiming the annexation of occupied territory and threatening repeatedly to use nuclear weapons. – Rappler.com