Evacuees from Mariupol area get settled at a refugee camp in the settlement of Bezymennoye during Ukraine-Russia conflict in the Donetsk region, Ukraine March 8, 2022. REUTERS/Alexander Ermochenko 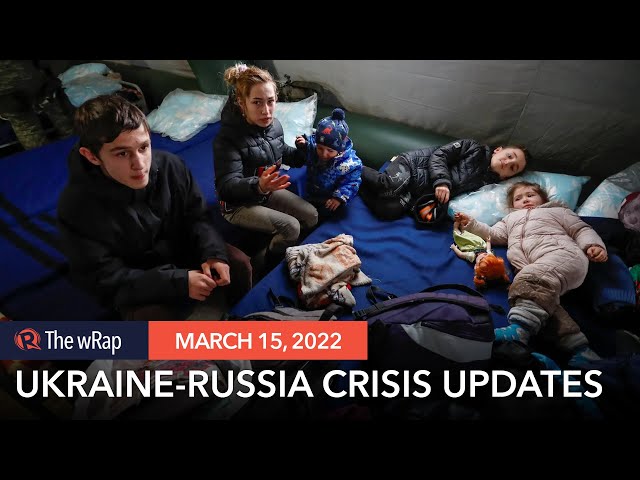 Three European prime ministers headed to Kyiv by train on Tuesday, March 15, for the first visit of its kind since war began, even as buildings there were ablaze and rescue workers were trying to pull survivors from the rubble of fresh Russian bombardment.

That foreign leaders could attempt to visit the Ukrainian capital was a striking symbol of Ukraine’s success so far in
fending off an assault that Western countries believe was aimed at seizing Kyiv weeks ago.

“It is our duty to be where history is forged. Because it’s not about us, but about the future of our children who deserve to live in a world free from tyranny,” said Polish Prime Minister Mateusz Morawiecki, who crossed the border with Czech Prime Minister Petr Fiala and Janez Jansa of Slovenia.

Fiala said the aim was “to confirm the unequivocal support of the entire European Union for the sovereignty and
independence of Ukraine.”

The visit comes at a time when Ukrainian officials are playing up the hope the war could end sooner than expected, saying Moscow may be coming to terms with its failure to impose a new government on Kyiv by force.

In the latest hint at compromise, President Volodymyr Zelensky said on Tuesday Kyiv was prepared to accept security guarantees that stop short of its long-term objective of the NATO alliance membership, which Moscow opposes.

Ukraine understands it does not have an open door to join NATO yet, Zelensky said in a video message: “If we cannot enter through open doors, then we must cooperate with the associations with which we can, which will help us, protect us … and have separate guarantees.”

Peace talks between Russian and Ukrainian delegations via a video link restarted on Tuesday after a pause on Monday, the first time a round of talks ran to a second day.

Kremlin spokesperson Dmitry Peskov said it was too early to predict progress: “The work is difficult, and in the current situation the very fact that (the talks) are continuing is probably positive.”

The European leaders will arrive in a city still under bombardment, where around half of the 3.4 million population has fled and residents spend nights sheltering in underground stations.

Two powerful explosions rocked Kyiv before dawn on Tuesday and tracer fire lit up the night sky. A high-rise apartment building was in flames in the morning after being struck by artillery.

Firefighters tried to douse the blaze and rescue workers helped evacuate residents trapped inside using mobile ladders. Officials said four people had died in Russian shelling of the capital in the early hours.

Sitting on the ground outside, resident Igor Krupa said he survived because he had slept under a makeshift shelter of furniture and metal weights: “All the windows went out and all the debris went into the apartment.”

But despite reducing some cities to rubble, Europe’s biggest invasion force since World War Two has been halted at the gates of Kyiv, and Russia has failed to capture any of Ukraine’s 10 biggest cities.

In his most confident public statement yet, Zelensky called on Russian troops to surrender.

“You will not take anything from Ukraine. You will take lives,” he said. “But why should you die? What for? I know that
you want to survive.”

Czech and Polish officials said the prime ministers’ mission was coordinated with the EU and agreed by the bloc’s leaders at a summit last week. However, some officials in Brussels were circumspect.

While every peace initiative was welcome, the trip “poses serious security risks,” noted one EU official. “Some leaders might also wonder: will this jeopardize or will this improve conditions for negotiations with the Russians. It remains to be seen, of course. It’s a fine line.”

One of Zelensky’s top aides said the war would be over by May, or even end within weeks, as Russia had run out of fresh troops.

“We are at a fork in the road now,” Oleksiy Arestovich said in a video. He said he expected either a peace deal within one or two weeks or another Russian attempt with new reinforcements, which could prolong the conflict for another month.

“I think that no later than in May, early May, we should have a peace agreement, maybe much earlier: we will see,” Arestovich said.

In Rivne in western Ukraine, officials said 19 people had been killed in a Russian air strike on a TV tower. If confirmed, it would be the worst attack on a civilian target so far in the northwest where Russian ground troops have yet to tread.

Peace talks have focused so far on local ceasefires to let civilians evacuate and bring aid to surrounded cities.

Worst-hit is the southeastern port of Mariupol, where hundreds have been killed since Russia laid siege in the war’s first week. Russian troops let a first column of cars leave Mariupol on Monday but attempts to bring in aid convoys have failed for 10 straight days. Ukrainian officials said they would try again.

While Russia has failed to seize any cities in the north and east, its has had more success in the south, where Moscow said on Tuesday it now controlled the entire Kherson region.

In an intelligence update on Tuesday, Britain’s ministry of defense reported demonstrations against Russian occupation in the southern cities of Kherson, Berdyansk and Melitopol.

The war has brought economic isolation upon Russia and led to a near total crackdown on free speech there, with all major independent media shut and Western social media apps switched off.

An employee of the main state TV channel stood behind an anchor during a news broadcast late on Monday and held up an anti-war sign.

The United Nations says nearly 3 million people have fled Ukraine since the start of the war.

Tanya, who crossed the Danube River to Romania, said she had fled the southern frontline town of Mykolaiv to save her child. “Because the people that are there now are Russians, Russian soldiers, and they kill children.” – Rappler.com

Hundreds of thousands of residents of Mariupol, which has been under constant bombardment, have sheltered in basements and the ruins of buildings without water or power for more than a week. Moscow on Monday allowed the first convoy to escape. Local authorities say anywhere between 2,300 and 20,000 civilians have died so far in Russian shelling in the city, a toll that could not be independently confirmed.

The death toll from Monday’s air strike on a TV tower in northern Ukraine rose to at least 19, said Vitaliy Koval, the governor of the northern region of Rivne.

Further talks between Ukrainian and Russian negotiators to ease the crisis were expected on Tuesday after discussions on Monday via video ended with no new progress announced.

Thousands have been killed in intense fighting and bombardments since Russian President Vladimir Putin ordered the invasion of Ukraine on February 24.

Russia calls its actions a “special military operation” to “denazify” the country and prevent genocide, a claim the United States and its allies reject as a pretext for an unjustified and illegal attack.

The United States has warned China against providing military or financial help to Moscow after its invasion of Ukraine.

Moscow denies making any such request, saying it has sufficient resources to fulfill all of its aims, while China has
labelled the reports on assistance as “disinformation”.

According to US officials, Russia has asked for military and economic support from Beijing, which signaled a willingness to provide aid.

“We have communicated very clearly to Beijing that we won’t stand by,” State Department spokesperson Ned Price told reporters after US national security adviser Jake Sullivan met China’s top diplomat Yang Jiechi in Rome. “We will not allow any country to compensate Russia for its losses.”

The seven-hour meeting was “intense” and reflected “the gravity of the moment,” according to a US official.

In Russia, a rare anti-war protest occurred in a studio during the main news program on state TV’s Channel One, which is the primary source of news for millions of Russians and closely follows the Kremlin line.

A woman held up a sign in English and Russian that said: “NO WAR. Stop the war. Don’t believe propaganda. They are lying to you here.”

US warns China against helping Russia as sanctions mount Britain’s defense ministry said Russia could be planning to use chemical or biological weapons in Ukraine in response to a staged fake attack on Russian troops, without citing evidence. US officials have made similar statements.

Russia has accused Ukraine of planning to use biological weapons. The United Nations on Friday said it had no evidence Kyiv had such a program.

At the disabled Chernobyl nuclear reactor, power had been restored after damage forced the plant to rely on electricity from diesel generators, Ukraine 24 reported on Tuesday.

The United Nations says more than 2.8 million people have now left Ukraine since the start of the war.

“I am fleeing with my child because I want my child to stay alive,” said a Ukrainian woman named Tanya who said she travelled from the town of Mykolaiv in southern Ukraine across the Danube river to Romania. “Because the people that are there now are Russians, Russian soldiers, and they kill children.”

Russia says it does not target civilians.

EU member states agreed on Monday to a fourth package of sanctions against Russia, according to France.

Details were not officially disclosed, but diplomatic sources said they would include an import ban on Russian steel and iron, an export ban on luxury goods and a ban on investment in the energy sector. 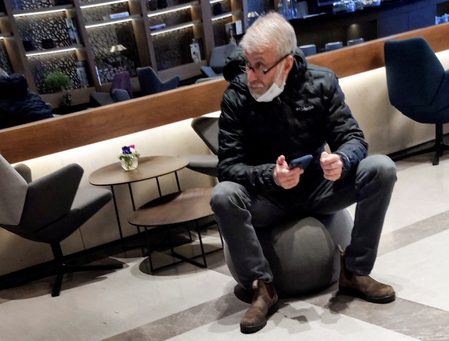 Chelsea soccer team owner Roman Abramovich and 14 others would be added to the EU blacklist, the sources said.

A jet linked to Abramovich landed in Moscow early on Tuesday, after taking off from Istanbul following a brief stop there, plane tracking data showed.

Japan on Tuesday announced an asset freeze for 17 Russian individuals, including 11 members of the Russian Duma, or parliament, five family members of banker Yuri Kovalchuk, as well as billionaire Viktor Vekselberg after similar US moves.

Western-led sanctions have cut Russia off from key parts of global financial markets and have frozen nearly half of the country’s $640 billion gold and foreign exchange reserves, triggering the worst economic crisis since the 1991 fall of the Soviet Union.

Russia’s finance ministry said it is preparing to service some of its foreign currency debt on Wednesday, but such payments will be made in roubles if sanctions prevent banks from honoring debts in the currency of issue. – Rappler.com