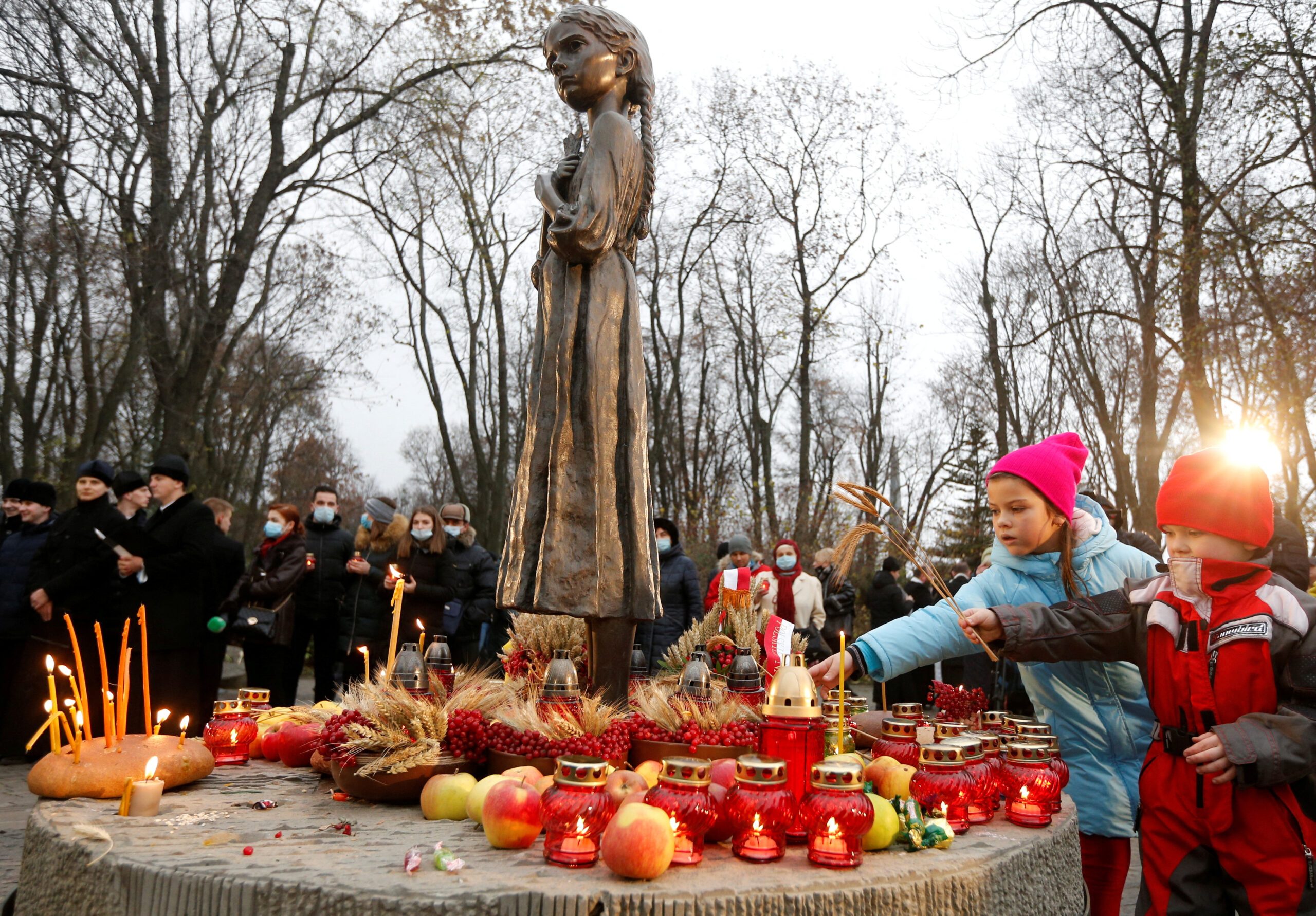 In this file photo, children place ears of wheat as they visit a monument to Holodomor victims during a commemoration ceremony marking the 87th anniversary of the famine of 1932-33, in which millions died of hunger, in Kyiv, Ukraine November 28, 2020.

Facebook Twitter Copy URL
Copied
'Once they wanted to destroy us with hunger, now – with darkness and cold,' President Volodymyr Zelenskiy writes on his Telegram channel. 'We cannot be broken.'

KYIV, Ukraine – Ukraine accused the Kremlin on Saturday of using the same “genocidal” tactics that it used against it in the 1930s under Josef Stalin as Kyiv commemorated a Soviet-era famine that left millions of Ukrainians dead during the winter of 1932-33.

Ukraine this year holds its memorial day for the victims of the “Holodomor” famine as it grapples to repel invading Russian forces and deals with massive power outages across the country after waves of Russian air strikes on vital infrastructure.

“Once they wanted to destroy us with hunger, now – with darkness and cold,” President Volodymyr Zelenskiy wrote on his Telegram channel. “We cannot be broken.”

In November 1932, Soviet leader Stalin dispatched police to seize all grain and livestock from newly collectivized Ukrainian farms, including the seed needed to plant the next crop.

“The Russians will pay for all of the victims of the Holodomor and answer for today’s crimes,” Andriy Yermak, the head of Ukraine’s presidential administration, wrote on Telegram.

Russia has targeted critical infrastructure across Ukraine in recent weeks through waves of massive air strikes that have sparked widespread power outages and killed civilians.

Millions of Ukrainians were still without power after fresh strikes this week, Zelenskiy said late on Friday.

The Kremlin has denied that its attacks, which have only galvanized Ukrainian public anger, were aimed at civilians but said on Thursday Kyiv could “end the suffering” by meeting Russia’s demands to resolve the war.

In a statement on Saturday, Ukraine’s foreign ministry accused Moscow of reviving the tactics of the 1930s.

“On the 90th anniversary of the 1932-1933 Holodomor in Ukraine, Russia’s genocidal war of aggression pursues the same goal as during the 1932-1933 genocide: the elimination of the Ukrainian nation and its statehood,” it said.

“The political and ideological narratives of the Stalinist era, in particular presenting the image of the so-called ‘hostile West’ and the denial of the existence of Ukraine as an independent state, are actively reproduced today,” the statement added.

Ukraine was a part of the Soviet Union until it declared independence in 1991. Part of Russian President Vladimir Putin’s justification for the invasion he launched on February 24 was what he portrayed as the West’s efforts to bring Ukraine into its fold, which he presented as a threat to Russia.

The ministry also slammed what it said were Russia’s current attempts to weaponize food by undermining a U.N.-brokered deal to unblock Ukrainian grain exports through the Black Sea.

“Now the world is faced with another artificial famine,” he said. “We are working together to secure full supplies from Ukraine to African and Asian countries.”

Russia’s ambassador to Turkey said on Friday that Moscow sends its representatives to more ship inspections in Istanbul per day than mandated under the Black Sea grain deal, rejecting a Ukrainian accusation that Russia is slowing down the process. – Rappler.com