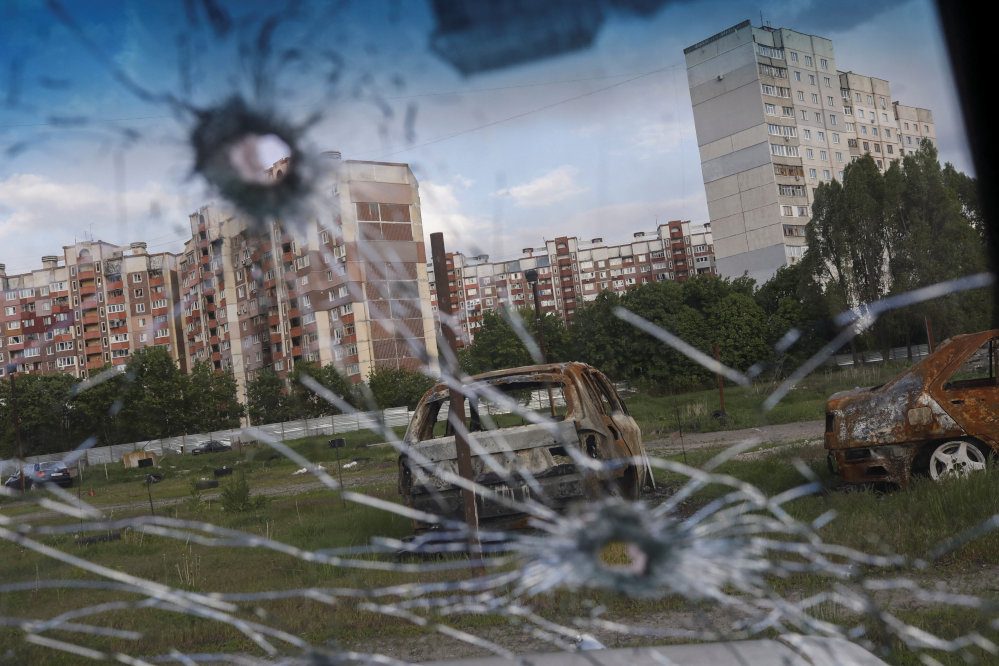 IN KHARKIV. Burnt cars are pictured through the glass of a damaged car in Saltivka neighbourhood, amid Russia's attack on Ukraine, in Kharkiv, Ukraine, May 10, 2022.

Facebook Twitter Copy URL
Copied
The 'contaminated' area is roughly half the size of Ukraine's territory, and about as large as Italy

KYIV – Ukraine will need at least a decade to clear all the mines and explosives from its land and territorial waters once its war with Russia is over, an emergency services official said on Friday, June 24.

Ukraine has managed to clear 620 square kilometers of land that were littered with thousands of explosive devices, including 2,000 bombs dropped from the air, but nearly 300,000 square kilometers are still seen as “contaminated,” the official said.

That is an area roughly half the size of Ukraine’s territory, and about as large as Italy. “Up to 10 years, that’s the optimistic figure. Because we don’t know what’s happening on the territories where active combat is ongoing right now,” Oleksandr Khorunzhiy, spokesperson for Ukraine’s State Emergency Service, said.

“Just imagine the number of bombs that have been dropped on us by the enemy,” the official told a news conference.

The first priority is to demine infrastructure, residential areas, and roads, but it will take longer to clear woods, rivers, and the coastline, he said.

Russia invaded Ukraine on February 24 in what Moscow calls a “special military operation” to demilitarise Ukraine and rid it of dangerous nationalists. Ukraine and its allies dismiss this as a baseless pretext to launch an unprovoked war of aggression.

The sea mines floating between Ukraine’s grain stocks and the world. – Rappler.com