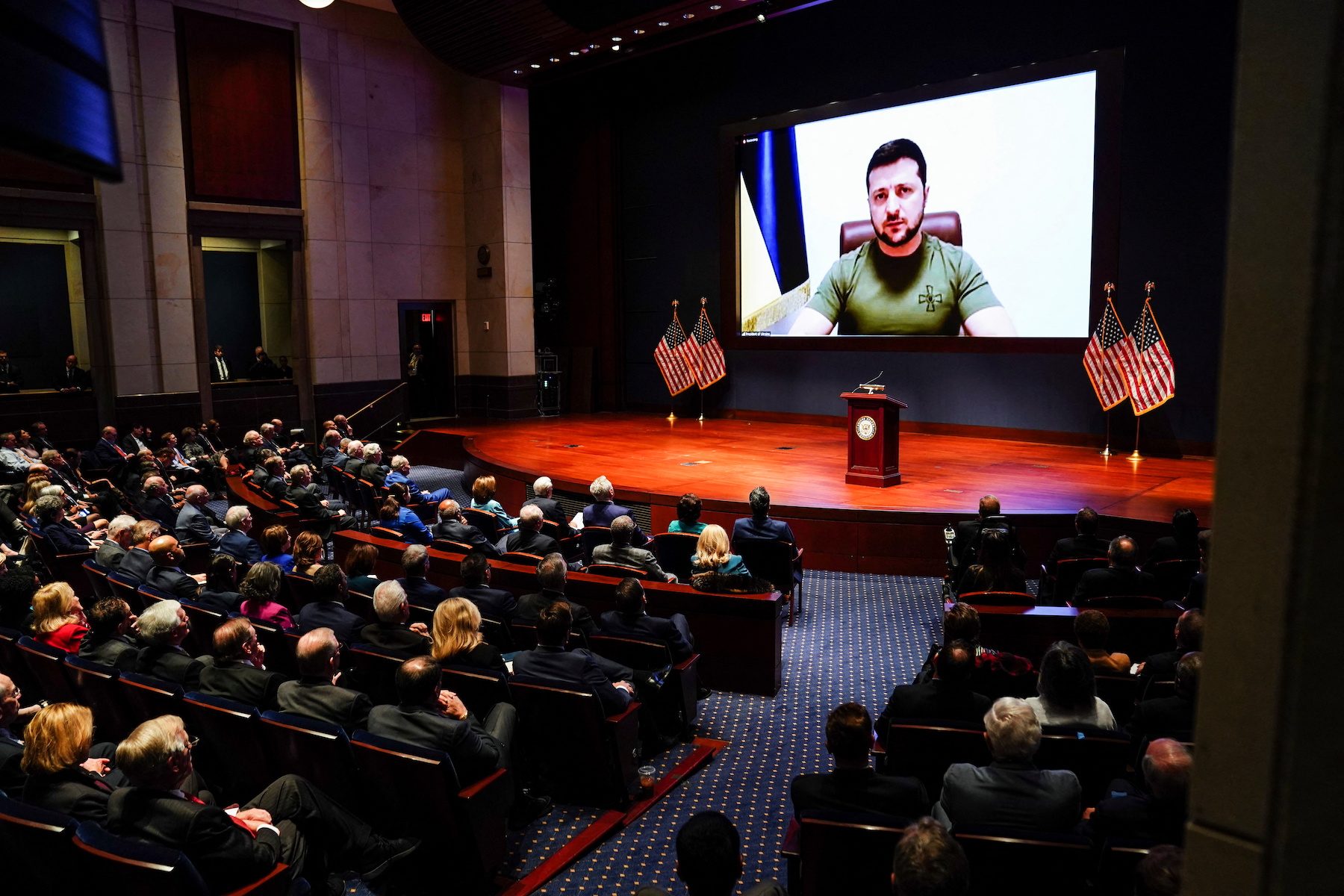 Ukraine’s President Volodymyr Zelenskiy delivers a video address to senators and members of the House of Representatives gathered in the Capitol Visitor Center Congressional Auditorium at the US Capitol in Washington, DC, USS, March 16, 2022. REUTERS/Sarah Silbiger/Pool

Facebook Twitter Copy URL
Copied
'Russia has turned the Ukrainian sky into a source of death,' Ukraine President Volodymyr Zelensky tells a meeting of the US House of Representatives and Senate. 'I need to protect our skies.'

WASHINGTON, DC, USA – Ukrainian President Volodymyr Zelensky on Wednesday urged the US Congress to provide more weapons to help his country fight off Russian airstrikes in an invasion that has brought death and destruction and unleashed a wave of refugees.

Reacting to concerns by President Joe Biden and many US lawmakers that imposing a no-fly zone could escalate the conflict with nuclear-armed Russia, Zelensky asked for more planes and air defense systems.

“Russia has turned the Ukrainian sky into a source of death,” he told a meeting of the House of Representatives and Senate. “I need to protect our skies.”

Zelensky’s virtual address came a day after he made a plea to Canada’s parliament for more Western sanctions on Russia and the imposition of a no-fly zone over Ukraine amid a conflict that began with Russia’s February 24 invasion.

Biden on Tuesday signed into law $13.6 billion in emergency aid to Ukraine to help it obtain more weaponry and for humanitarian assistance.

Biden was expected to announce an additional $800 million in security assistance to Ukraine later on Wednesday in remarks on US aid to the country, a White House official said.

Zelensky has sought in recent weeks to shore up support for his country in various speeches to foreign audiences, also including the European Parliament and the British Parliament.

Support for Ukraine is a rare instance in which Republicans and Democrats have aligned in a sharply divided Congress, with some lawmakers in both parties urging Biden to go further in helping Ukraine. There is some bipartisan support in Congress for rushing combat aircraft to Ukraine.

On Tuesday, the US Senate unanimously passed a resolution condemning Russian President Vladimir Putin as a war criminal.

The United Nations estimates that around 3 million people have fled Ukraine, mostly women and children, and are seeking safety in neighboring countries, mainly Poland.

Biden has announced a ban on Russian oil and other energy imports and has called for a suspension of Russia’s trading status that affords its exported products lower tariffs in the international arena. The House is attempting to pass legislation responding to Biden’s request this week.

It is rare for foreign leaders to address the US Congress during wartime. A famous example came in 1941, when British Prime Minister Winston Churchill spoke to Congress just weeks after Japan’s attack on Pearl Harbor that drew the United States into World War Two. Churchill warned that “many disappointments and unpleasant surprises await us.”

In 2015, Israeli Prime Minister Benjamin Netanyahu delivered a speech to Congress opposing an international deal aimed at discouraging Iran from developing nuclear weapons as the matter was being debated in Washington.

The first foreign leader to address a joint meeting of Congress was King Kalakaua of Hawaii in 1874, before Hawaii became a state.

Following the breakup of the Soviet Union, Russian President Boris Yeltsin in 1992 addressed Congress. Yeltsin’s upbeat speech proclaimed: “We have left behind the period when America and Russia looked at each other through gun sights, ready to pull the trigger at any time.”