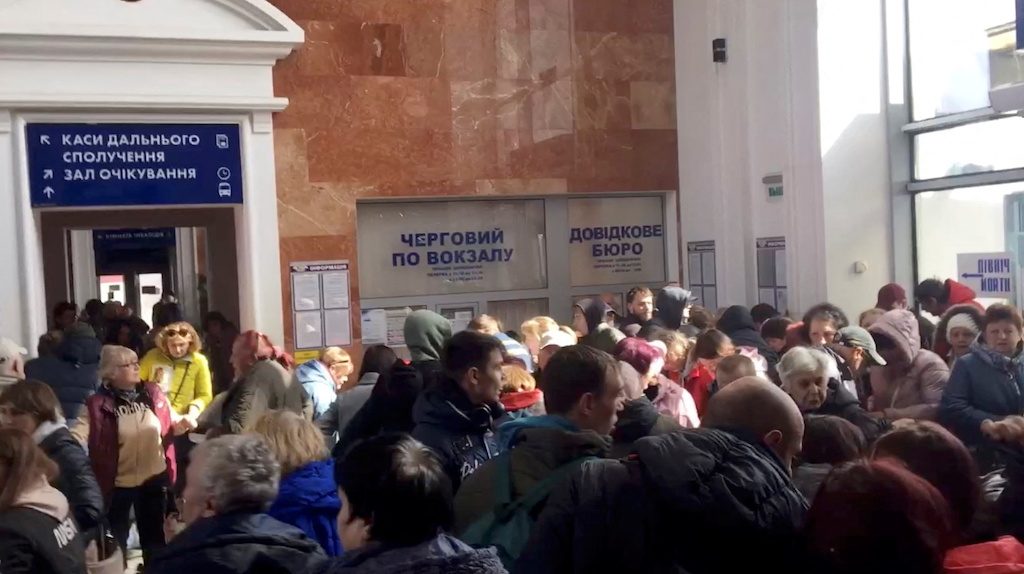 People crowd inside the Kramatorsk Railway Station, in Kramatorsk, Ukraine, April 8, 2022, in this still image obtained from a handout video recorded on April 8, 2022. Oleksiy Merkulov u2013 Donechchyna TV/Handout via REUTERS

LVIV, Ukraine – Ukraine on Saturday, April 9, called on civilians in the eastern Luhansk region to flee from amassing Russian forces after officials said more than 50 civilians trying to evacuate by rail from a neighboring region were killed in a missile attack the previous day.

Air-raid sirens sounded in cities across eastern Ukraine, which has become the focus of Russian military action in recent weeks following a withdrawal from areas close to Kyiv.

“They are amassing forces for an offensive,” Luhansk Governor Serhiy Gaidai in a televised address in which he urged remaining civilians to flee shelling that he said had intensified in recent days.

Russia’s invasion, which began on February 24, has forced more than 4 million people to flee abroad, killed or injured thousands, left a quarter of the population homeless, and turned cities into rubble.

The civilian casualties have triggered a wave of international condemnation, in particular over the deaths in the town of Bucha, which was until last week occupied by Russian forces.

Russia has denied targetting civilians in what it calls a “special operation” to demilitarize and “denazify” its southern neighbor. Ukraine and Western nations have dismissed this as a baseless pretext for war.

President Volodymyr Zelenskiy called for a “firm global response” to Friday’s missile attack on a train station crowded with women, children and the elderly in the Donetsk region city of Kramatorsk, a hub for civilians fleeing the east.

The attack left shreds of blood-stained clothes, toys and damaged luggage strewn across the station’s platform.

City Mayor Oleksander Honcharenko, who estimated 4,000 people were gathered there at the time, said on Saturday that the death toll had risen to least 52.

Russia’s defense ministry denied responsibility, saying in a statement the missiles that struck the station were used only by Ukraine’s military and that Russia’s armed forces had no targets assigned in Kramatorsk on Friday.

Russian state television described the attack as a “bloody provocation” by Ukraine.

In Washington, a senior defense official said the United States did not accept the Russian denial and believed Russian forces had fired a short-range ballistic missile in the attack.

Reuters was unable to verify the details of attack.

Honcharenko said he expected just 50,000-60,000 of Kramatorsk’s population of 220,000 population to remain within a week or two as people flee the violence.

Leaving Ukraine after a visit, von der Leyen said she had seen with her own eyes on Friday the destruction in the town of Bucha near Kyiv. A forensics team began exhuming a mass grave on Friday containing the bodies of civilians who local officials say were killed while Russians occupied the town.

“My instinct says: If this is not a war crime, what is a war crime, but I am a medical doctor by training and lawyers have to investigate carefully,” von der Leyen told reporters on board a train leaving Ukraine.

The Kremlin has repeatedly rejected accusations it has committed war crimes and has called allegations that its forces executed civilians in Bucha a “monstrous forgery.”

German Chancellor Olaf Scholz said the perpetrators of civilian killings in Bucha were guilty of war crimes and must be held accountable.

The EU on Friday overcame some divisions to adopt new sanctions, including bans on the import of coal, wood, chemicals and other products alongside the freezing of EU assets belonging to President Vladimir Putin’s daughters and more oligarchs.

Zelenskiy responded in a video address on Friday evening with a call for the West to do more, including imposing an energy embargo and cutting off all Russian banks from the global financial system.

The Ukrainian military says Moscow is preparing for a thrust to try to gain full control of the Donbas regions of Donetsk and Luhansk that have been partly held by Moscow-backed separatists since 2014.

Air attacks are likely to increase in the south and east as Russia seeks to establish a land bridge between Crimea – which Moscow annexed in 2014 – and the Donbas but Ukrainian forces are thwarting the advance, the British Defense Ministry said in an intelligence update.

Russia’s military said on Saturday it had destroyed an ammunition depot at the Myrhorod Air Base in central-eastern Ukraine.

The Kremlin said on Friday its operation could end in the “foreseeable future” with its aims being achieved by the Russian military and peace negotiators.