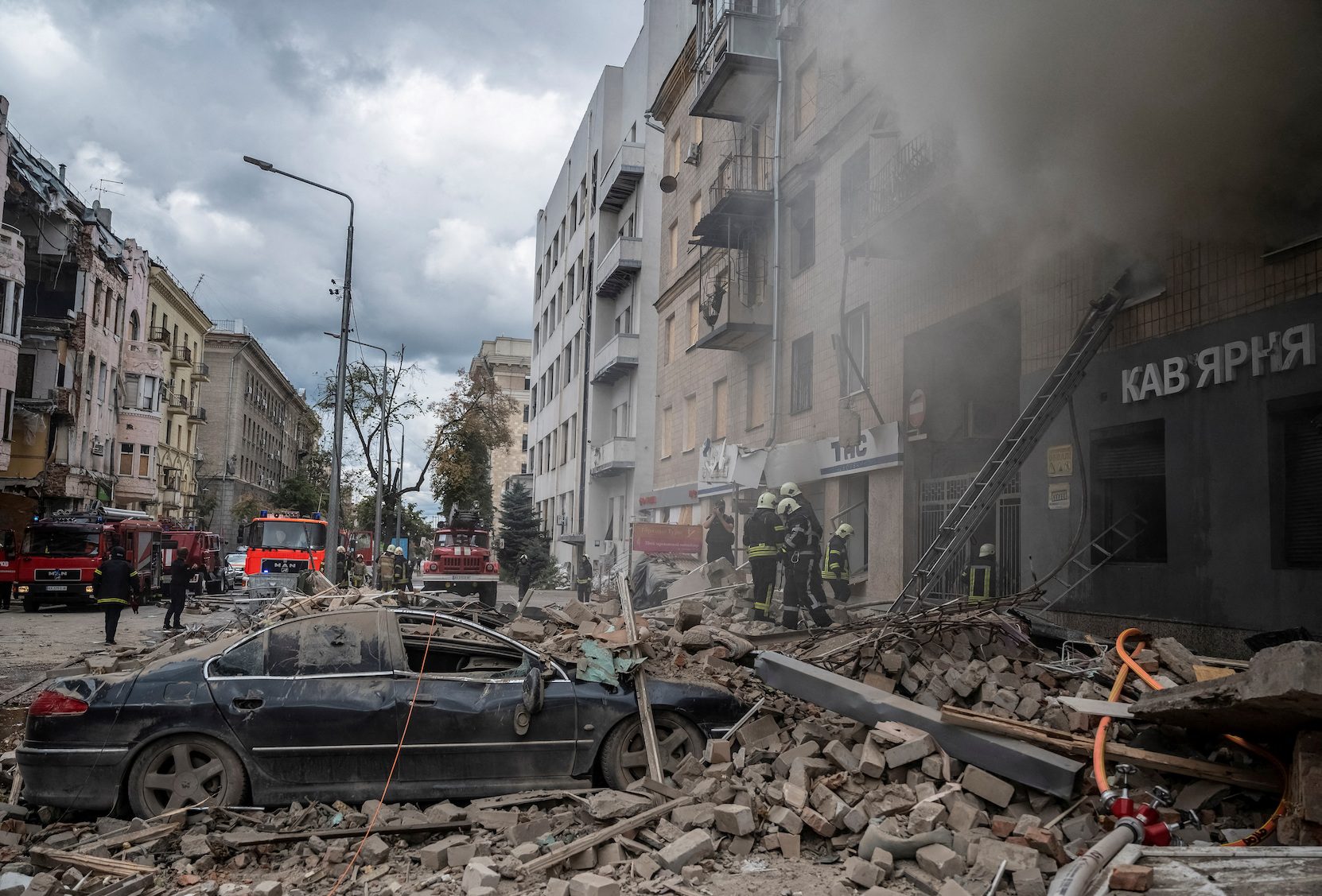 FILE PHOTO: Firefighters work at the site of a residential building hit by a Russian military strike, amid Russia's attack on Ukraine, in Kharkiv, Ukraine September 6, 2022.

Facebook Twitter Copy URL
Copied
The gains, if confirmed and held, would be a serious blow for Russia, which Western intelligence services say has suffered huge casualties

KYIV, Ukraine – Ukraine has recaptured more than 700 sq km (270 sq miles) of its territory in the east and south during a lightning counteroffensive, a Ukrainian general said on Thursday, September 8, offering the first official assessment of the operation.

The gains, if confirmed and held, would be a serious blow for Russia, which Western intelligence services say has suffered huge casualties. They would also represent a big boost for Kyiv, which is keen to show its Western backers that it can change the facts on the ground by force and deserves continued support.

Some of the biggest gains appear to have been made this week during a surprise Ukrainian counteroffensive in the Kharkiv region of northeastern Ukraine, which saw Kyiv’s forces make a sudden and deep thrust behind Russian lines.

Brigadier General Oleksiy Gromov told a news briefing that Ukrainian forces had advanced up to 50 kilometers (30 miles) behind Russian lines and recaptured more than 20 villages in the Kharkiv region.

He singled out the role of Turkish-made Bayraktar drones.

“Enemy infantry and motorized artillery units unprotected by air defense systems become easy prey for our Bayraktars, the quantity of which is always increasing, thanks to our volunteers,” said Gromov.

A Russian official said Moscow’s forces had put up stiff resistance and prevented Kyiv’s forces from taking at least one key town in the Kharkiv region.

Gromov broke the news as US Secretary of State Antony Blinken arrived in Ukraine. Blinken was expected to announce $2 billion in new foreign military financing to Ukraine and 18 other countries at risk of future Russian aggression. Roughly half the money will go to Kyiv.

US Defense Secretary Lloyd Austin said earlier on Thursday that President Joe Biden had also approved an additional and separate $675 million in weapons to Ukraine as he and other defense ministers met in Germany to discuss how to continue supporting Ukraine in the long-term.

US President Joe Biden was due to hold a call on Thursday with allies and partners to underscore Washington’s continued support for Ukraine, the White House said.

The latest announcements of military aid bring the total US security assistance to Ukraine to $15.2 billion since Biden took office in January 2021, a US official said.

Ukrainian President Volodymyr Zelenskiy had spoken of “good news” on the battlefields of eastern Ukraine the night before and had thanked three brigades for what he called their bravery.

In a late night address to the nation, Zelenskiy had said: “This week we have good news from Kharkiv Oblast. All of you have most likely seen reports about the recent activities of Ukrainian defenders. And I think every citizen feels proud of our warriors.”

Kharkiv region borders Russia and its main city, Kharkiv, has for months been struck by Russian missiles after Moscow failed to take it in the early stages of its February 24 invasion.

There is pressure on Kyiv to demonstrate progress on the ground before winter sets in, amid threats by Russian President Vladimir Putin to halt all energy shipments to Europe if Brussels goes ahead with a proposal to cap the price of Russian gas.

Russia has confirmed fighting in the Kharkiv region area but has not confirmed any territorial losses, though unverified social media accounts run by Russian military experts have suggested Moscow did suffer setbacks and will need to urgently reinforce.

Ukrainian presidential adviser Oleksiy Arestovych, in a video posted on YouTube, said Ukrainian troops had surprised Russian defenders at the town of Balakleiia.

“The Russians are saying that Balakleiia is encircled when in fact (our troops) have gone much further,” he said.

Vitaly Ganchev, a local pro-Russian official, told Russian state TV that Russian forces had fought off a Ukrainian attempt to encircle and capture Balakleiia, which he said remained in Russian hands.

“The enemy had considerable success near Balakleiia with a relatively small force … It would appear that Russian forces slept through this advance and were expecting it elsewhere,” he wrote on Telegram.

Ukraine has for weeks been talking about a big counteroffensive in the south, which is also underway though details about it are sparse. Western military analysts believe Russia may have left itself exposed in other areas as it rushed to reinforce the south.

Heavy fighting was also reported on Thursday in areas near the Russian-held Zaporizhzhia nuclear power station in southern Ukraine after Kyiv warned it might have to shut down the plant
to avoid disaster.

Putin said on Wednesday that Russia would not lose what he calls its “special military operation” in Ukraine, an exercise he has described as an attempt to preemptively protect his country’s security against an expanding NATO.

Asked about the war’s progress, Putin said: “We have not lost anything and will not lose anything.”

He also threatened to halt all energy supplies to Europe if Brussels adopted a proposed price cap on Russian gas, the latest Western step to deprive the Kremlin of funds to finance the war.

The United States and France says Moscow is already using energy as a “weapon” to weaken Europe’s opposition to its invasion, with the main conduit for Russian gas into Europe, the Nord Stream 1 pipeline, shut for maintenance.