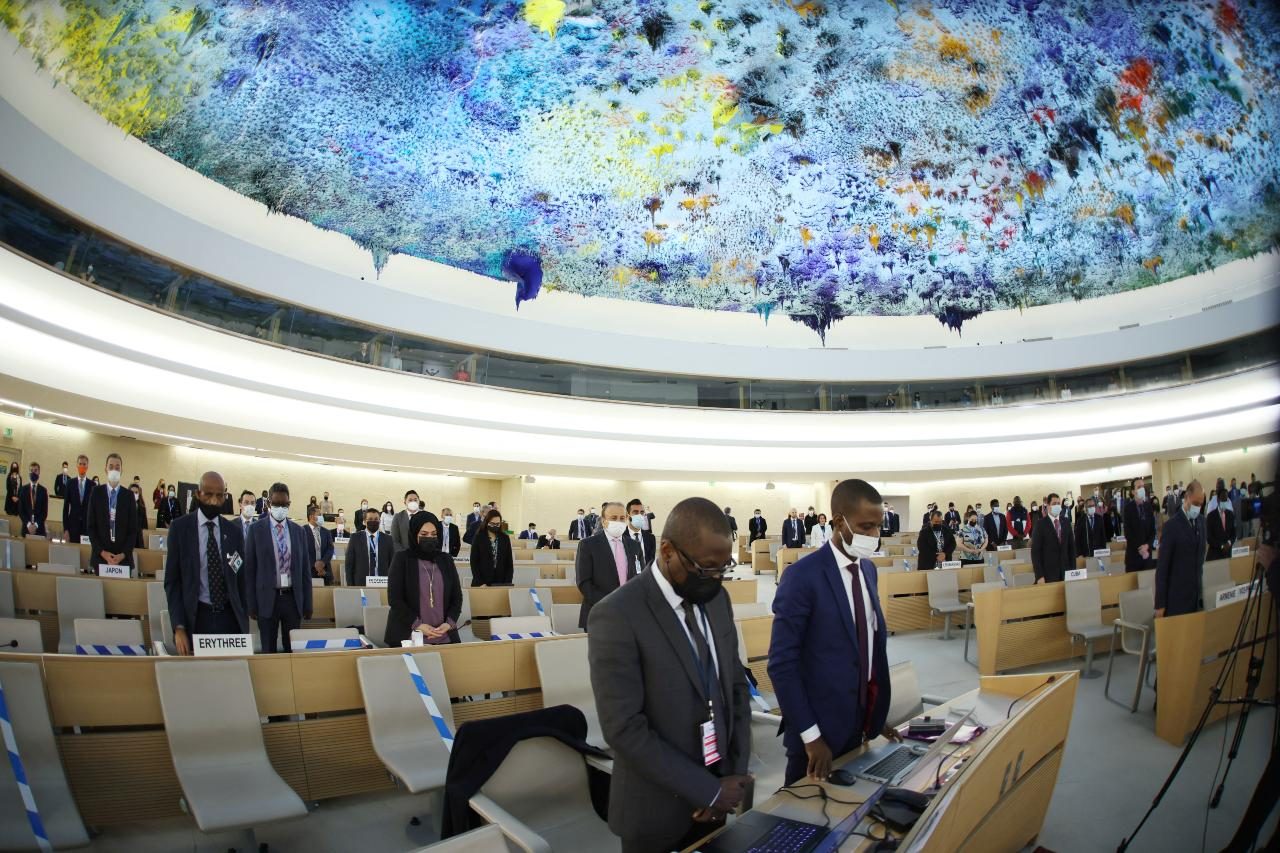 SILENCE. Delegates observe a minute of silence during the special session on the situation in Ukraine of the Human Rights Council at the United Nations in Geneva, Switzerland, on March 4, 2022. Picture taken with a fisheye lens.

Facebook Twitter Copy URL
Copied
(1st UPDATE) The Geneva-based body cannot make legally binding decisions but its decisions send important political messages and can authorize investigations, such as the one to be carried out by the three-person commission created by the March 4 vote

GENEVA, Switzerland – The UN Human Rights Council on Friday, March 4, condemned alleged rights violations by Russia in its invasion of Ukraine and agreed to set up a commission to investigate them, including possible war crimes.

Thirty-two members of the council voted in favor of the resolution brought by Ukraine. Russia and Eritrea voted against it, while 13, including China, abstained.

“Those from Russia directing and committing violations against my people should be paying attention. The evidence is going to be collected; you are going to be identified, and you are going to be held to account,” Ukraine’s ambassador to the United Nations in Geneva, Yevheniia Filipenko, flanked by Western ambassadors, told reporters after the vote.

The Geneva-based council cannot make legally binding decisions but its decisions send important political messages and can authorize investigations, such as the one to be carried out by the three-person commission created by Friday’s vote.

Earlier, Filipenko told the council there was “irrefutable evidence of gross and systematic human rights violations as well as war crimes and crimes against humanity by Russia.”

Russia, which has called its actions since February 24 a “special operation,” has denied targeting civilians in Ukraine.

Its delegate, Evgeny Ustinov, told the council that the resolution’s backers “will use any means to blame Russia for the events in Ukraine.”

Washington, which just rejoined the body as a voting member after quitting under former President Donald Trump, called the outcome “a powerful condemnation of Russia’s actions.”

The commission, set up for an initial period of one year and tasked with producing a report by early 2023, will work alongside a large, existing United Nations rights team for Ukraine which has 60 members.

Its exact scope is yet to be determined, but one diplomat said that its mandate to look at the “root causes” of the conflict might include probing allegations of abuses inside Russia.

Filipenko said the commission would work alongside the International Criminal Court in the Hague, which has sent a team to the Ukraine region to look into possible war crimes by all parties in the conflict.

Some rights groups had called for Russia, a voting member of the 47-Member Council, to be suspended. However, this can only be decided by the United Nations General Assembly in New York. – Rappler.com