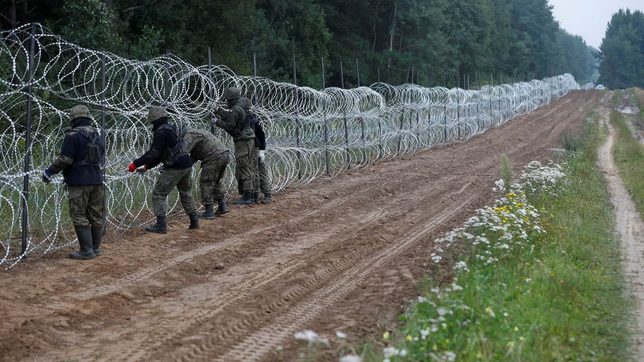 BORDER. Polish soldiers build a fence on the border between Poland and Belarus near the village of Nomiki, Poland, on August 26, 2021. REUTERS/Kacper Pempel/File Photo

Facebook Twitter Copy URL
Copied
On the political situation in Belarus, Michelle Bachelet says more than 650 people are believed to be imprisoned due to their beliefs

The United Nations human rights chief called on Belarus‘ neighbors on Friday, September 24, to protect asylum-seekers after four people died near the Polish border earlier this week amid a surge in illegal migration across the European Union’s eastern frontier.

Michelle Bachelet also told the UN Human Rights Council that Belarusian authorities had clamped down on fundamental freedoms, with arrests of activists and journalists “on what routinely appear to be politically-motivated charges.”

“I take this opportunity to remind all governments that under international law, no one should ever be prevented from seeking asylum or other forms of international protection,” Bachelet told the Geneva forum.

Illegal migrants and asylum-seekers are entitled to food, water and medical care and any asylum claims should be examined individually, she said.

Poland, Lithuania and the EU have accused Belarus of encouraging migrants, mostly from Iraq and Afghanistan, to cross the borders in order to put pressure on the bloc over sanctions Brussels imposed on Minsk over human rights abuses.

Polish officials said on Monday, September 20, three people had died after crossing into Poland from Belarus, while a fourth person died inside Belarus. Authorities on both sides gave no cause of death.

On Friday Polish border guards reported a fifth death – of an Iraqi man, probably from a heart attack – in the border area.

On the political situation in Belarus, Bachelet said more than 650 people were believed to be imprisoned due to their beliefs and there had been no genuine investigations into police brutality and mistreatment.

Yury Ambrazevich, Belarus ambassador to the UN in Geneva, rejected her report as being full of “unfounded statements and false accusations.”

President Alexander Lukashenko, who has ruled Belarus since 1994, has cracked down hard on protesters since claiming victory in a presidential election in August 2020 that his critics say was rigged. He denies the accusations. – Rappler.com