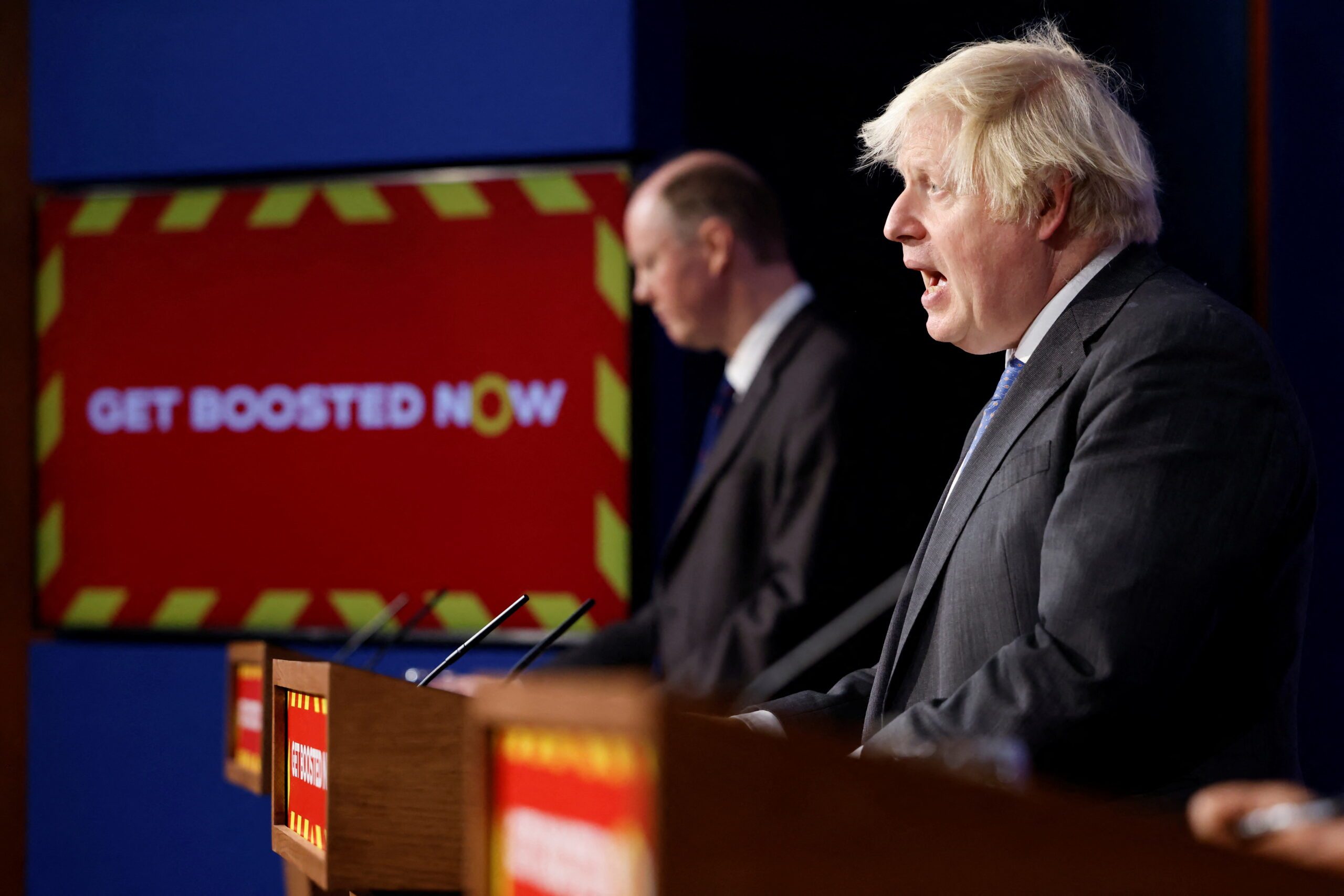 Facebook Twitter Copy URL
Copied
(1st UPDATE) As many as 20 Conservative lawmakers who won their seats at the last general election in 2019 plan to submit letters of no confidence in Johnson, a Telegraph report says

LONDON, United Kingdom – British Prime Minister Boris Johnson, fighting to save his premiership amid a storm over a series of lockdown parties in Downing Street, told parliament on Wednesday, January 19, he would not resign.

Johnson is struggling to quell an internal revolt by his own lawmakers who are angry over the parties in Downing Street, the prime minister’s office and residence, during COVID lockdowns, as well as facing opposition calls for him to step down.

Johnson, who in 2019 won his party’s biggest majority in more than 30 years on a pledge to “Get Brexit Done”, has repeatedly apologized for the parties and said that he was unaware of many of them.

However, he attended what he said he thought was a work event on May 20, 2020 which revelers had been told to “bring their own booze”.

“Every week, the prime minister offers absurd and frankly unbelievable defenses to the Downing Street parties, and each week it unravels,” Keir Starmer, leader of the opposition Labour Party, told parliament.

Starmer, who welcomed the defection of lawmaker Christian Wakeford who left Johnson’s Conservatives to join Labour, asked Johnson if a prime minister should resign if he misled parliament.

Asked directly if he would resign, Johnson said: “No”.

To trigger a leadership challenge, 54 of the 360 Conservative MPs in parliament must write letters of no
confidence to the chairman of the party’s 1922 Committee.

As many as 20 Conservative lawmakers who won their seats at the last national election in 2019 plan to submit letters of no confidence in Johnson, the Telegraph reported. A handful of others have already said they had written such letters.

An analysis by The Times newspaper showed that 58 Conservative lawmakers had openly criticized the prime minister.

Toppling Johnson would leave the United Kingdom in limbo for months just as the West deals with the Ukraine crisis and the world’s fifth largest economy grapples with the inflationary wave triggered by the COVID pandemic, with UK inflation rising to the highest level in nearly 30 years.

Leading rivals within the Conservative Party include Chancellor of the Exchequer Rishi Sunak, 41, and Foreign Secretary Liz Truss, 46.

Johnson on Tuesday denied an accusation by his former adviser that he had lied to parliament about a lockdown party, saying nobody had warned him the “bring your own booze” gathering might contravene COVID-19 rules.

“As he waded through the empty bottles and platters of sandwiches – he didn’t realize it was a party? Does the prime minister realize how ridiculous that sounds?” Starmer told parliament.

Downing Street lockdown parties – some held when ordinary people could not bid farewell in person to dying relatives – have undermined Johnson’s authority.

His own former spokeswoman resigned after she was captured laughing and joking on camera about how to cast a party if asked about it by reporters.

Such was the revelry in Downing Street at one event that staff went to a nearby supermarket to buy a suitcase of alcohol, spilled wine on carpets, and broke a swing used by the prime minister’s young son.

The Mirror said staff had bought a wine fridge for Friday gatherings, events that were regularly observed by Johnson as he walked to his apartment in the building.

Johnson has given a variety of explanations of the parties, ranging from denials that any rules were broken to expressing understanding for the public anger at apparent hypocrisy at the heart of the British state.

Opponents have called for Johnson to resign, casting him as a charlatan who demanded the British people follow some of the most onerous rules in peacetime history while his staff partied.

“My decision is about much more than your leadership and the disgraceful way you have conducted yourself in recent weeks,” said defecting lawmaker Wakeford.

“I can no longer support a government that has shown itself consistently out of touch with the hard working people of Bury South and the country as a whole.”

The growing internal Conservative rebellion was cast as the “pork pie plot” because one alleged rebel lawmaker was from Melton, the home of the Melton Mowbray pork pie. Pork pie is also London slang for a lie.

The rise of Alexander Boris de Pfeffel Johnson, often referred to as simply “Boris,” to prime minister was the grandest move in a career that took him from journalism via TV show fame, comedy and scandal into the cauldron of the Brexit crisis – and then to the frontline of the coronavirus pandemic.

A flamboyant figure known for his ambition, untidy blond hair, flowery oratory and cursory command of policy detail, Johnson’s rise to power was all about Brexit.

But after securing Britain’s exit from the European Union, Johnson was hit by the COVID-19 pandemic which has killed 152,513 people in the United Kingdom. After surviving COVID-19 in 2020, he said it nearly killed him. – Rappler.com