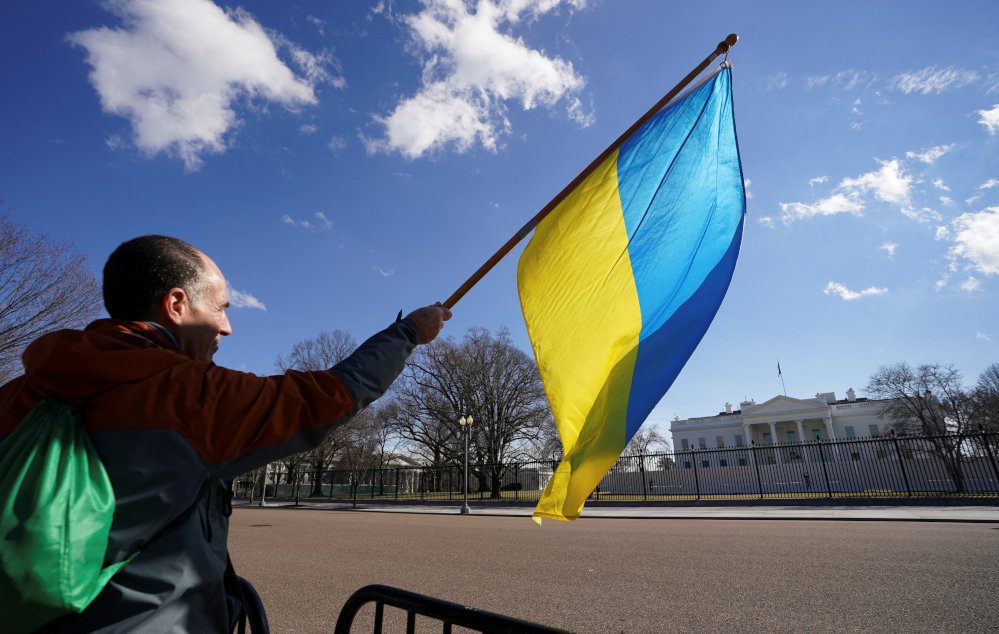 SUPPORTING UKRAINE. A man holds up a Ukraine flag during a demonstration in front of the White House to support Ukraine and protest Russia's invasion of the country, in Washington, DC, USA, on February 25, 2022

Facebook Twitter Copy URL
Copied
In a memorandum to Secretary of State Antony Blinken, US President Joe Biden directs $350 million to be allocated through the Foreign Assistance Act be designated for Ukraine's defense

WASHINGTON, DC, USA – President Joe Biden instructed the US State Department to release up to an additional $350 million worth of weapons from US stocks to Ukraine on Friday as it struggles to repulse a Russian invasion.

In a memorandum to Secretary of State Antony Blinken, Biden directed that $350 million allocated through the Foreign Assistance Act be designated for Ukraine’s defense.

Ukraine has been asking for Javelin anti-tank weapons and Stinger missiles to shoot down aircraft.

On Saturday, Blinken said in a statement that this third authorization for weapons shipments to Ukraine was “unprecedented.”

The United States drew from US weapons stocks to supply Ukraine in the fall of 2021 and then again in December. Over the past year the United States has committed more than $1 billion in security assistance to Ukraine, Blinken said.

Other nations have pledged military materiel to Kyiv as Ukraine’s military fights against an invading Russian force. Russian troops started advancing into Ukraine again on Saturday after President Vladimir Putin paused the offensive a day earlier in anticipation of talks with Kyiv that never happened, the Kremlin said.

The Netherlands will supply 200 Stinger air defense rockets to Ukraine as quickly as possible, the Dutch government said in a letter to parliament on Saturday.

Germany, which had a long-standing policy of not exporting weapons to war zones, approved the delivery of 400 rocket propelled grenades from the Netherlands to Ukraine, the defense ministry in Berlin said, confirming a shift in policy after it faced criticism for refusing to send weapons to Kyiv, unlike other Western allies.

France has decided to send defensive military equipment to Ukraine to support the country against Russia’s invasion, a French army spokesman said on Saturday, adding that the issue of sending offensive arms was still under consideration. – Rappler.com