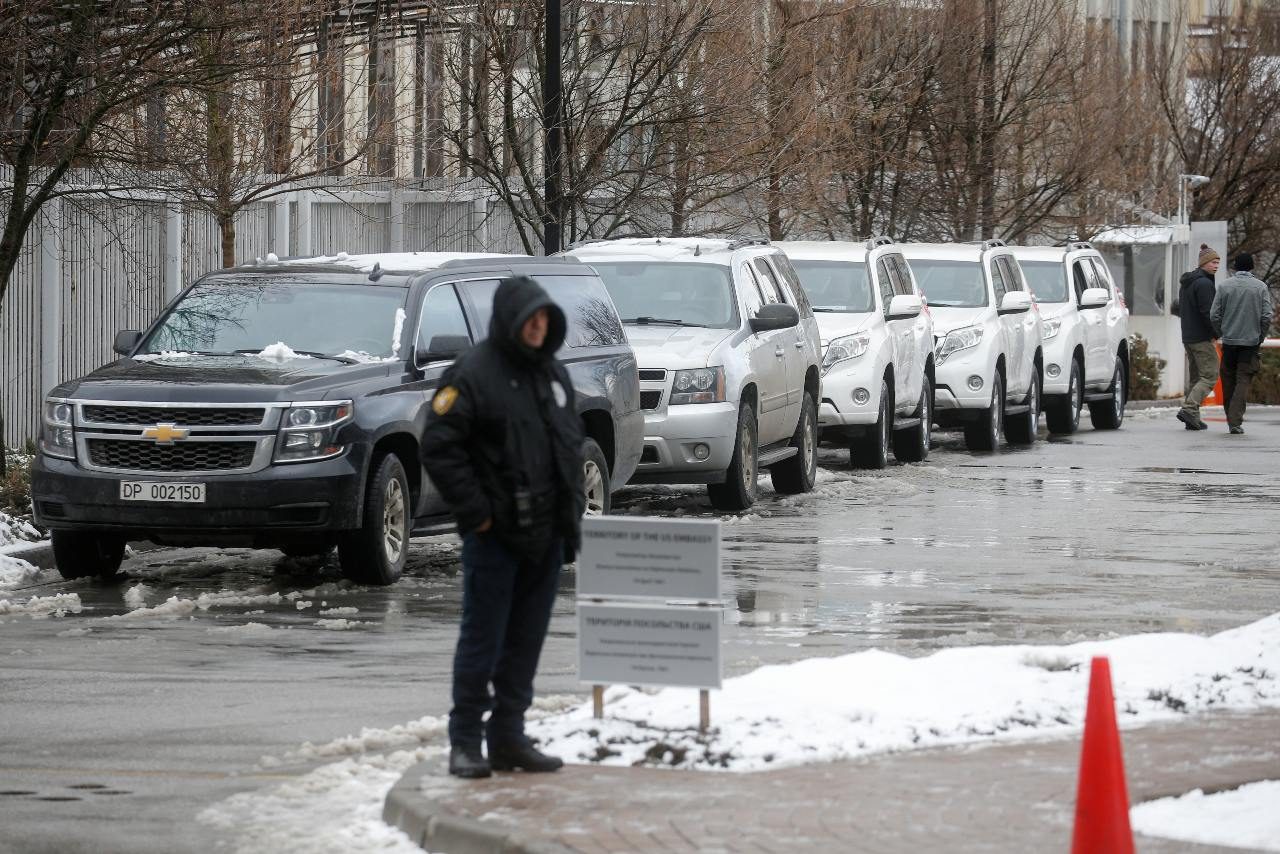 PULLING OUT. Diplomatic cars are parked outside the US embassy in Kyiv, Ukraine, on February 12, 2022.

WASHINGTON DC, USA – The United States said on Saturday, February 12, it was ordering most staff at its embassy in Kyiv to leave Ukraine immediately due to the threat of an invasion by Russia.

An updated travel advisory said the State Department had ordered the departure of most employees at the embassy in Kyiv, adding to its call earlier this week for private US citizens to leave Ukraine immediately.

A senior State Department official said the Biden administration would continue diplomatic efforts to “ensure that Ukraine does not become a war zone.”

Washington’s warnings that the Russian buildup of more than 100,000 troops on Ukraine’s borders could herald an invasion have become increasingly urgent in recent days. Moscow has denied its plans to invade, saying it has its own security concerns over what it terms aggression by NATO allies.

“It appears increasingly likely that this is where this situation is headed – towards some kind of active conflict, and that is why we are reducing our staff to a bare minimum while we still have the ability to get our official people out safely and in a predictable fashion,” said the official, who briefed reporters on condition of anonymity.

Tensions have been mounting for weeks during the Russian military buildup near its ex-Soviet neighbor. Washington said on Friday, February 11, an invasion could happen anytime and urged US citizens in Ukraine to leave the country right away, saying that it will not send troops to evacuate them if conflict erupts.

A string of other countries including Britain, Japan, and Australia have also said their citizens should leave.

A US official said the order for US citizens to leave Ukraine includes those working for a monitoring mission by the Organization for Security and Cooperation in Europe (OSCE).

The OSCE did not respond to a request for comment.

The OSCE conducts operations in Ukraine including a civilian monitoring mission in the Russian-backed self-proclaimed separatist republics in the country’s east where a war that erupted in 2014 has killed more than 14,000 people.

Routine consular services at the Kyiv embassy would be suspended from Sunday, February 13, the State Department official said, but some emergency services would be provided in Lviv, a city in western Ukraine that is further from the eastern and northern borders where Russian troops are massed.

Embassy personnel will return to the United States and continue to work on Ukraine, the official said.

Russia, which has accused Western nations of spreading lies, meanwhile said on Saturday it had decided to “optimize” its diplomatic staff numbers in Ukraine, fearing “provocations” by Kyiv or another party.

Moscow did not say whether that meant a reduction in staff numbers but said the embassy and consulates in Ukraine continued to perform their key functions. – Rappler.com