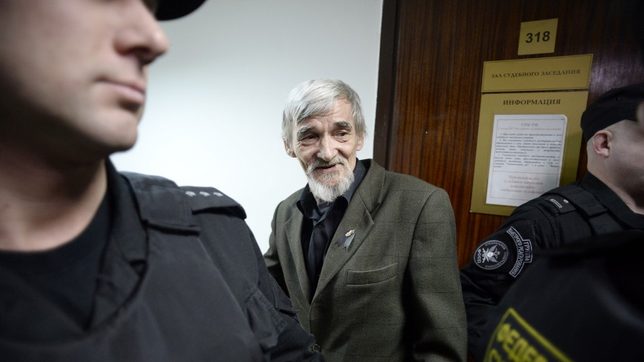 (FILES) In this file photo taken on April 05, 2018 Russian historian Yury Dmitriyev, who heads rights group Memorial's branch in Karelia, arrives for the verdict in his child pornography trial at a court in the city of Petrozavodsk in northwestern Russia. - A Russian court was expected on July 22, 2020 to hand down verdict in a controversial case against a Gulag historian charged with abusing his adoptive daughter in a trial his allies say was orchestrated to silence him. Yury Dmitriyev, head of the prominent rights group Memorial in Karelia in northwestern Russia, spent decades locating and exhuming mass graves of people killed under Soviet dictator Joseph Stalin's rule. (Photo by Olga MALTSEVA / AFP)

A Russian court was expected on Wednesday, July 22, to hand down verdict in a controversial case against a Gulag historian charged with abusing his adoptive daughter in a trial his allies say was orchestrated to silence him.

The prosecution has claimed that the 64-year-old historian sexually abused his adopted daughter, charges he vehemently denies.

A judge in the northwestern city of Petrozavodsk was expected to hand down a verdict on Wednesday behind closed doors.

Prosecutors have demanded that he be convicted and sentenced to 15 years in a strict-regime penal colony.

Memorial said the prosecution of the researcher is part of a growing crackdown on dissenters.

“There are no doubts that Yury Dmitriyev is innocent,” the rights group said ahead of the verdict.

“The truth about the past does not fit the state’s historical narrative,” Memorial added.

Supporters including prominent advocates at home and abroad say the case against Dmitriyev is an attempt to punish the historian who has called attention to one of the darkest chapters in Russia’s history.

Dmitriyev is known for helping open the Sandarmokh memorial in a pine forest in Karelia in memory of thousands of victims – including many foreigners – murdered in 1937 and 1938.

In an appeal to the Council of Europe this year, prominent writers including Nobel laureate Svetlana Alexievich and Jonathan Littell called the historian “a bone in the authorities’ throat.”

“The Russian authorities are seeking to rewrite the history of Sandarmokh by slandering its discoverer and groundlessly accusing Dmitriyev of an outrageous crime,” they said.

The historian was initially arrested in late 2016 on child pornography charges and spent more than a year in pre-trial detention before calls by prominent figures resulted in his release.

In April 2018, he was acquitted, but in a surprise turnabout he was detained again on assault charges later that year after a higher court overturned the not guilty verdict.

Dmitriyev’s previous case centered on naked photographs of his then pre-teen adopted daughter seized during a search of his home after an anonymous tip-off to police.

Independent newspaper Novaya Gazeta reported that Dmitriyev’s cellmates had last year tried to pressure him into admitting his guilt or face sexual abuse in prison.

Speaking in court during his second trial this month, Dmitriyev, who himself was adopted, said he did everything to raise his adopted daughter to be happy and healthy.

In the speech published by the Meduza news portal, he also said it was important for people to remember their past.

“The strength of the state is not in its tanks and guns, in its nuclear rockets or an ability to tell everyone to flip off,” he said.

“No, the strength of the state is in its people.” – Rappler.com