CLIMATE CHANGE. A delegate looks at a screen during the UN Climate Change Conference (COP26) in Glasgow, Scotland, Britain, November 8, 2021.

Facebook Twitter Copy URL
Copied
An overarching goal for the COP26 summit of 'keeping alive' a 1.5-degree Celsius limit on global warming is in jeopardy

An overarching goal for the COP26 UN summit of “keeping alive” a 1.5-degree Celsius limit on global warming is in jeopardy, with deep splits about what would signal its demise.

Global average surface temperatures are already up about 1.1C above pre-industrial times.

And climate scientists say they will almost inevitably “overshoot” 1.5C, the most ambitious goal set in the 2015 Paris Agreement, as planet-heating emissions rebound after a dip due to the COVID-19 pandemic.

Some nations, especially island states at risk of being swamped by rising seas, say reaching 1.5C – in any year – would be the death knell of the iconic goal.

Under the 2015 Paris Agreement, countries formally aimed to limit warming to “well below” 2C while “pursuing efforts” for 1.5C.

“Beyond 1.5 we cannot imagine a future. It is not a number for negotiation,” said Satyendra Prasad, Fiji’s ambassador to the United Nations.

Many vulnerable countries have campaigned for years with the slogan “1.5 to stay alive”. But the world is slipping off track.

Deep cuts in emissions, mainly from burning fossil fuels – twinned with mass plantings of trees that soak up carbon, and novel technologies for extracting greenhouse gases from the atmosphere – could eventually turn down the global thermostat.

“We have this delicate dilemma that it’s really important for policymakers to aim for 1.5 – but that does not mean that we lose the world’s future at 1.6 or 1.7,” Rockström said.

The Earth might be able to tolerate a brief overshoot, he said, before irreversible changes set in, such as the meltdown of Antarctica’s ice sheet or mass collapse of coral reefs.

“Every tenth of a degree matters,” he said, adding that people, especially the young, would have “every reason to be angry” if temperatures rise 1.5C. 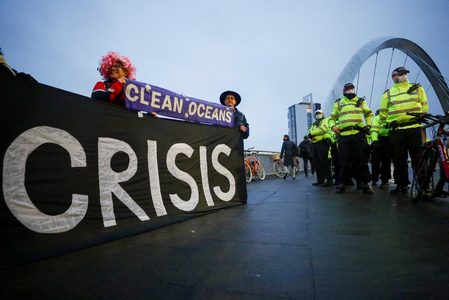 On the COP26 conference’s website, the main goal listed by Britain is to “secure global net zero by mid-century and keep 1.5 degrees within reach.”

Prime Minister Boris Johnson tweeted at the start of the summit “Let’s keep 1.5 alive #COP26”. Britain has not defined what it means by “within reach” or “alive.”

The UN’s Intergovernmental Panel on Climate Change said in August that the 1.5C goal is likely to be breached in the period 2021-2040, even with steep cuts in emissions.

He said the lack of a clear definition may make it easier for Britain and other nations to claim success at the end of the COP26 summit, due to close on Friday, buoyed by pledges to phase out coal, cut methane emissions and halt deforestation, among others.

“The window (for 1.5) is closing, but there is still time for us to act,” said Alok Sharma, the British president of the talks, asked to define when the 1.5C goal might be considered dead.

He pointed to big progress in recent years.

Before the 2015 Paris climate conference, he noted that one scientific projection showed the world was on track for a catastrophic 6C of warming. After pledges for emissions cuts in Paris, that fell to about 4C, he said.

And last week, the International Energy Agency said new commitments in recent days, such as by India to reach net zero emissions by 2070, meant warming could be limited to 1.8C by 2100.

The IEA added a key caveat that the projection would require all national goals to be met “in full and on time”, after years of failed promises.

The United Nations says emissions would have to fall 7.6% a year this decade to get on track for the 1.5C goal. Such a pace is unknown except during wartime, pandemics, recessions or the collapse of the Soviet Union and its smokestack industries.

Greenhouse gas emissions tumbled by 5.4% in 2020 during lockdowns to curb the COVID-19 pandemic, close to the UN’s recommended amount, but are on track to rebound by 4.9% this year, according to the Global Carbon Project.

Some environmental groups say the idea of overshooting the 1.5C goal, and then reversing course, is a fantasy.

“People who are talking about overshoots and having more time aren’t serious about 1.5,” said Jennifer Morgan, executive director of Greenpeace International.

“Technologies that don’t exist yet are not a way to keep it alive,” she said. Emerging technologies include machines to suck carbon from the air, or to capture and bury emissions from power plants.

Mohamed Adow, head of the Nairobi-based think-tank Power Shift Africa, said the world should keep working for 1.5C, even if temperatures overshoot.

But all agree the opportunity to keep it in sight is shrinking fast.

“Overshoot is not endless – probably 1.6, 1.7 maximum to get back down to 1.5 by the end of the century,” said Niklas Höhne, founding partner of the NewClimate Institute.

He added that governments were doing too little to curb emissions – putting the crucial target at risk.

“For me, 1.5 would be dead if we continue on this trajectory for another five years, maximum,” he warned. – Rappler.com