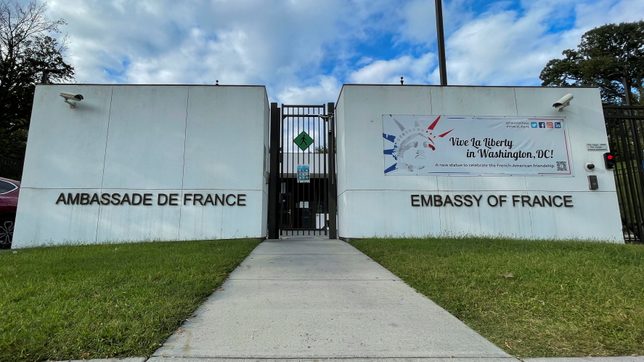 FRENCH EMBASSY. The French Embassy is seen after it was announced France decided to recall its ambassadors in the United States and Australia for consultations after Australia struck a deal with the US and Britain which ended a $40 billion French-designed submarine deal. This image was taken in Washington, US, on September 17, 2021.

Facebook Twitter Copy URL
Copied
(1st UPDATE) Australia says it will scrap a $40-billion deal with France in order to build nuclear-powered submarines with the US and Britain. France calls it a stab in the back.

Australia has made a “huge” diplomatic error by ditching a multi-billion-dollar order for French submarines in favor of an alternative deal with the United States and Britain, France’s envoy to Canberra said on Saturday, September 18.

Canberra announced on Thursday it would scrap its 2016 deal with France’s Naval Group to build a fleet of conventional submarines and instead build at least eight nuclear-powered ones with US and British technology after striking a trilateral security partnership.

The move caused fury in France, a NATO ally of the United States and Britain, prompting it to recall its ambassadors to Washington and Canberra, and also riled China, the major rising power in the Indo-Pacific region.

“It will provoke other powers to also act more aggressively in the region, especially in the South China Sea,” the Malaysian prime minister’s office said, without mentioning China.

Beijing’s foreign policy in the region has become increasingly assertive, particularly its maritime claims in the resource-rich South China Sea, some of which conflict with Malaysia’s own claims.

“This has been a huge mistake, a very, very bad handling of the partnership – because it wasn’t a contract, it was a partnership that was supposed to be based on trust, mutual understanding, and sincerity,” France’s Ambassador Jean-Pierre Thebault told reporters in Canberra before returning to Paris.

France has previously branded the cancellation of the deal – valued at $40 billion in 2016 and reckoned to be worth much more today – a stab in the back.

US State Department spokesperson Ned Price said France was a “vital ally” and that the United States would work in the coming days to resolve the differences.

Australia said it regretted the recall of the French ambassador and that it valued the relationship with France and would keep engaging with Paris on other issues.

“Australia understands France’s deep disappointment with our decision, which was taken in accordance with our clear and communicated national security interests,” a spokesperson for Foreign Affairs Minister Marise Payne said on Saturday.

Thebault said he was very sad to have to leave Australia but added there “needs to be some reassessment” of bilateral ties.

In separate comments made to SBS radio, Thebault said of the ditched agreement: “It was not about selling salads or potatoes, it was a relationship of trust at the highest level covering questions of the highest level of secrecy and sensitivity.”

The row between Paris and Canberra marks the lowest point in their relations since 1995, when Australia protested France’s decision to resume nuclear testing in the South Pacific and recalled its ambassador for consultations.

Public opinion in France, where President Emmanuel Macron is expected to seek a second term in an election due next year, has also been very critical of Australia and the United States.

“You can understand for geopolitical reasons Australia getting closer to other anglophone countries like the United States and Britain,” said Louis Maman, a Parisian surgeon out for a stroll on Saturday on the Champs-Elysees.

“But there was a real contract and I think there was an alliance and a friendship between Australia and France. It’s spoiling a friendship,” he said. “I took it as a betrayal.” – Rappler.com