CLIMATE PLEDGE. UN Secretary-General Antonio Guterres speaks to reporters after a meeting with British Prime Minister Boris Johnson for climate change discussions during the 76th Session of the UN General Assembly in New York on September 20, 2021.

Guterres made the statement on the sidelines of the United Nations General Assembly past midnight (Manila time) on Tuesday, September 21, after meeting world leaders in an informal roundtable on climate change.

Others present were US, China, India, and EU nations, as well as Costa Rica, the Maldives, and a mix of developing and middle income countries and industrialized nations. 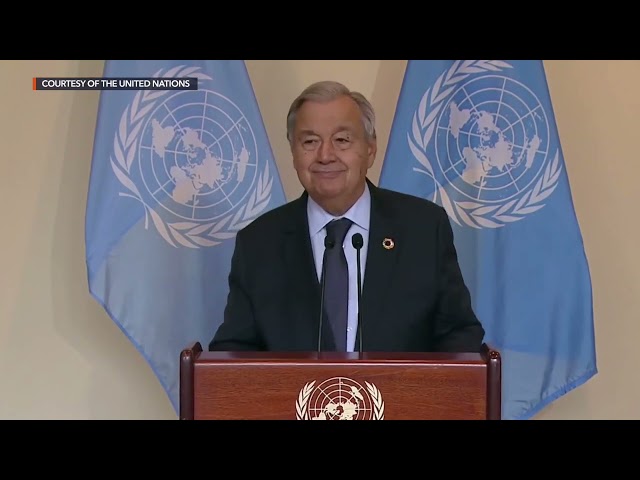 “Will the developed world finally materialize the $100 billion of annual support to developing countries, and if possible, more? We are not yet there. But today, there were encouraging declarations in this regard,” Guterres told reporters.

Guterres said he is hopeful the roundtable would eventually lead countries to “make serious progress” in the COP26 climate summit in Glasgow, Scotland in November.

“Everybody must do their job. Developed countries and the emerging economies must be able to contribute – all of them – for the possibility of reaching net zero in 2050 and very strong reduction of emissions in 2030, and we are not yet there,” said the UN Secretary-General

Why does this matter for the Philippines?

Philippine President Rodrigo Duterte’s climate commitment before the UN is for the country to reduce greenhouse gas emissions by 75% in 2030.

But this is mostly conditioned on aid from the international community, which would include the promised annual $100-billion climate fund that developed nations have yet to pool together.

This fund could help mitigate the devastating natural calamities that Filipinos may end up facing in the future if the planet becomes 1.5 degrees warmer. A recent report by the UN’s Intergovernmental Panel on Climate Change said floods, rains, heatwaves, and drought will keep worsening in the Philippines for the next 30 years – no matter what steps Filipinos take to slash emissions.

Duterte is expected to raise the issue of climate change and its impacts on Filipinos when he addresses the 76th UNGA early Wednesday morning (Manila time) on September 22. – with reports from Reuters/Rappler.com