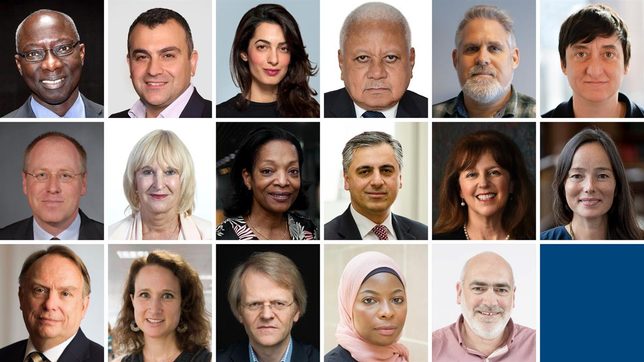 SPECIAL ADVISERS. ICC Prosecutor Karim Khan chooses 17 eminent experts in the field of international law to be his special advisers.

Photo from ICC Office of the Prosecutor

“I have no doubt that with their enormous experience and hugely impressive credentials, they will significantly contribute to the work of the Office and the cause of international criminal justice. I very much look forward to working with and learning from them,” Khan said in statement released by the Office of the Prosecutor (OTP) on Friday, September 17.

Clooney, who has appeared before the ICC, will be Khan’s special adviser in Darfur, Sudan. There is an ongoing investigation of Darfur for alleged genocide, war crimes, and crimes against humanity committed since July 2002, when Sudan joined the ICC.

Clooney has represented victims of crimes in Darfur, particularly in the case against Janjaweed leader Ali Kushayb. She also leads the international legal team of Rappler CEO Maria Ressa.

So far, Clooney is the only special adviser for a geographical area, as others are for types of crimes. Khan, however, is looking for a special adviser from the Asia Pacific, as well as the Group of Latin America and the Caribbean.

“The Prosecutor will be looking to appoint additional Special Advisers, in particular from the GRULAC (Group of Latin America and the Caribbean) and Asia-Pacific regions,” said the statement of the Office of the Prosecutor (OTP).

The Philippines, Bangladesh, and Myanmar are the three Asia-Pacific countries with ongoing investigations at the ICC. The ICC pre-trial chamber recently authorized the investigation into killings in President’s Rodrigo Duterte’s war on drugs, as well as those in Davao City when Duterte was mayor and vice mayor.

The attacks against the Rohingyas is considered as one case for Bangladesh and Myanmar. The Philippines, Bangladesh, and Myanmar investigations are for alleged crimes against humanity.

The other special advisers are:

Khan also appointed three special advisers without specific designations, which is a “novelty” at the OTP, the statement said. They are:

“These appointments form part of Prosecutor Khan’s vision, early in his mandate, to build on what has been accomplished to date and reinforce the Office’s capabilities to effectively and efficiently discharge its mandate under the Statute,” the OTP said. – Rappler.com