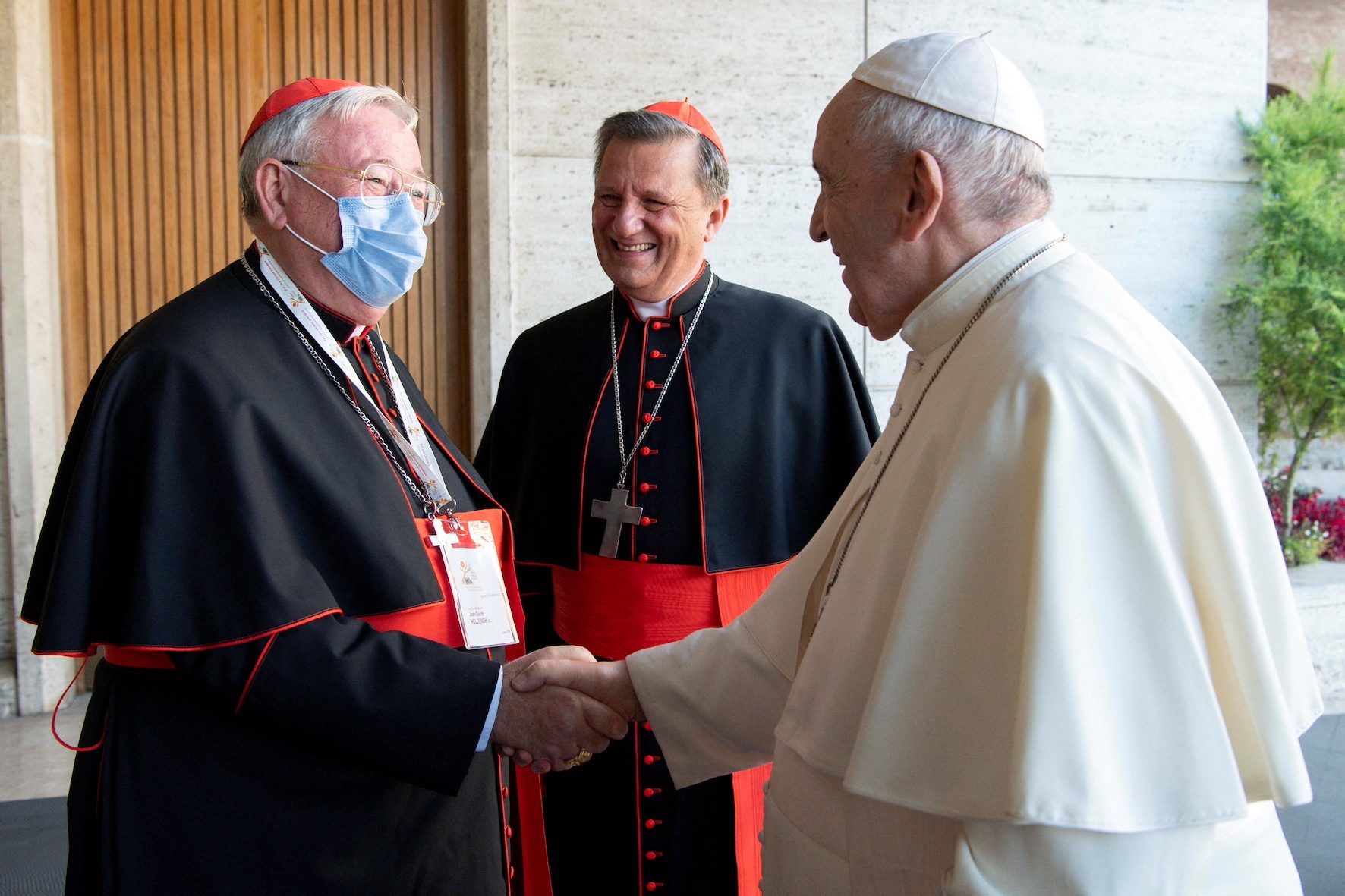 FILE PHOTO: Cardinal Jean-Claude Hollerich S.J., Archbishop of Luxembourg, (in mask) greets Pope Francis at the opening of the Synodal Path at the Vatican October 9, 2021.

VATICAN CITY – A prominent liberal cardinal who leads a body representing European bishops has called for “fundamental revision” in Catholic teaching on homosexuality, and said it is wrong to fire Church workers for being gay.

The remarks by Luxembourg Cardinal Jean-Claude Hollerich to the German Catholic news agency KNA were among the most direct calls ever by a Roman Catholic leader for change in teaching on one of the most controversial issues in the Church today.

Hollerich is president of the pan-European grouping of Catholic bishops’ conferences, known as COMECE.

In the KNA interview, Hollerich was asked for his assessment of a campaign in which about 125 Catholic Church employees in Germany, including some priests, came out as LGBTQ, and about the Church’s teachings on homosexuality.

“I believe that the sociological-scientific foundation of this teaching is no longer true,” he said in interview that was published on Tuesday in Germany.

In another part Hollerich said: “I think it’s time we make a fundamental revision of the doctrine”.

The Roman Catholic Church teaches that same-sex attraction is not a sin, but homosexual acts are.

Hollerich, who did not elaborate on what aspects of the teaching he felt needed revision, said: “I also believe that we are thinking ahead in terms of doctrine. The way the pope has expressed himself in the past can lead to a change in doctrine.”

Homosexuality is one of the most controversial issues in the 1.3 billion-member Church, with conservatives accusing Pope Francis of giving mixed signals and confusing the faithful.

Francis has said that while the Church cannot accept same-sex marriage, it can support civil union laws aimed at giving gay partners joint rights in areas of pensions, health care and inheritance.

He has sent notes of appreciation to priests and nuns who minister to gay Catholics and said parents of gay children should never condemn them, but under his watch the Vatican has also said priests cannot not bless same-sex couples.

In December, a Vatican department raised conservative ire when it apologized for “causing pain to the entire LGBTQ community” by removing from its website a link to resource material from a Catholic gay rights advocacy group in preparation for a Vatican meeting in 2023. It was later reposted.

In his interview with KNA, Hollerich also said gay Church employees should not lose their jobs, something which has
happened in some countries, particularly the United States.

“They know they have a home in the Church. With us (the Luxembourg archdiocese) no one is dismissed because they are homosexual,” he told KNA. – Rappler.com