CHRISTMAS EVE. Pope Francis kisses a statue of baby Jesus as he celebrates Christmas Eve Holy Mass in St. Peter's Basilica at the Vatican on December 24, 2021.

Facebook Twitter Copy URL
Copied
'On this night of love, may we have only one fear: that of offending God's love, hurting him by despising the poor with our indifference,' says Pope Francis

VATICAN CITY – Pope Francis, leading the world’s Roman Catholics into Christmas, said on Friday, December 24, that people who are indifferent to the poor offend God, urging all to “look beyond all the lights and decorations” and remember the neediest.

Francis, ushering in the ninth Christmas of his pontificate, celebrated a solemn vigil Mass in St. Peter’s Basilica for about 2,000 people, with participation restricted by COVID-19 to about a fifth of the size of pre-pandemic years. 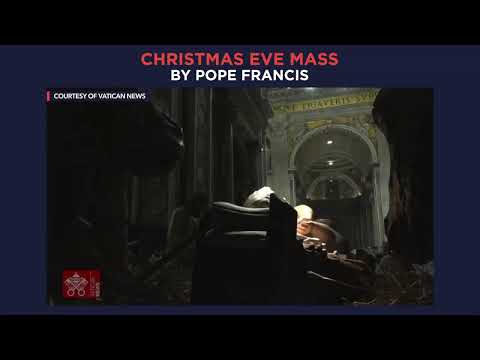 Francis, wearing white vestments, wove his homily the around the theme that Jesus was born with nothing.

“Brothers and sisters, standing before the crib, we contemplate what is central, beyond all the lights and decorations, which are beautiful. We contemplate the child,” he said in the homily of the Mass con-celebrated with more than 200 cardinals, bishops, and priests. All but him wore masks.

Francis, who turned 85 last week, said the baby Jesus born in poverty should remind people that serving others is more important than seeking status or social visibility or spending a lifetime in pursuit of success.

“It is in them (the poor) that he wants to be honored,” said Francis, who has made defense of the poor a cornerstone of his pontificate.

“On this night of love, may we have only one fear: that of offending God’s love, hurting him by despising the poor with our indifference. Jesus loves them dearly, and one day they will welcome us to heaven,” he said.

He quoted a line from a poem by Emily Dickinson – “Who has found the heaven – below – Will fail of it above” – and added in his own words: “Let us not lose sight of heaven; let us care for Jesus now, caressing him in the needy, because in them he makes himself known.”

Saying that working people – the shepherds – were the first to see the baby Jesus in Bethlehem, Francis said labor had to have dignity and lamented that many people die in workplace accidents around the world.

“On the day of Life, let us repeat: no more deaths in the workplace! And let us commit ourselves to ensuring this,” he said.

The United Nation’s International Labour Organisation (ILO) estimates that there are more than a million work-related fatalities every year.

On Saturday, Francis will deliver his twice-yearly “Urbi et Orbi” (to the city and the world) blessing and message from the central balcony of St. Peter’s Basilica. – Rappler.com