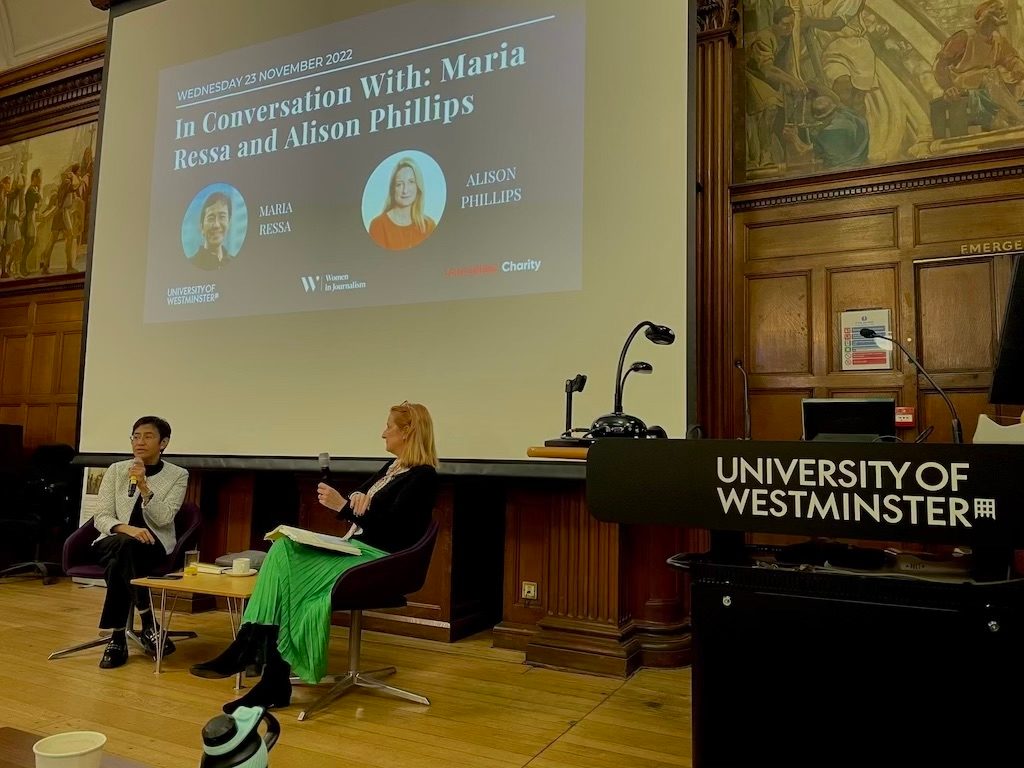 WOMEN IN JOURNALISM. Nobel peace prize winner Maria Ressa talks to British journalist and Women in Journalism chair Alison Phillips at an event at the University of Westminster in London, UK on November 23, 2022. Photo by Pedro Melo

Facebook Twitter Copy URL
Copied
'We need to do something, otherwise we lose the last two minutes of democracy,' says Nobel laureate and Rappler CEO Maria Ressa at one of the London stops of her book launch

LONDON, United Kingdom – “I sound like an activist; I’m not, I’m a journalist,” Maria Ressa said on a rainy Wednesday morning in London.

Ressa was talking about the tyranny of algorithms and living through six years of a tumultuous Rodrigo Duterte presidency that shoved her to a corner with a dozen cases, one guilty libel conviction that is on appeal, and a closure order looming on her brainchild Rappler.

“But when it became a battle of facts, journalism became activism. We need to do something, otherwise we lose the last two minutes of democracy,” said Ressa, the CEO of Rappler and co-recipient of the 2021 Nobel Peace Prize, at a talk at the University of Westminster in London. 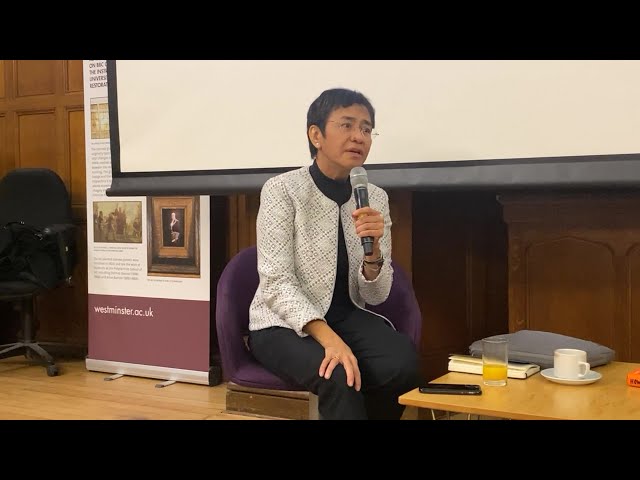 The group Women in Journalism, chaired by British journalist Alison Phillips, hosted Ressa’s November 23 talk as one of the stops of the launch of her book, How to Stand up to a Dictator.

Ressa reiterated her call for government regulators to help stop what is called surveillance capitalism, a term coined by scholar Shoshana Zuboff, whom the Nobel laureate quotes at length in her book and lectures, about how personal data mined without consent are cloned and used for profit. Imagine your deepest darkest fears cloned and sold for profit, Ressa would tell different groups of audiences in London.

Ressa said that when news is distributed in big tech platforms, surveillance capitalism works in a way that “it encourages bad journalism.”

“And it’s something we struggle with every time. Data investigations are really boring, facts are boring, you spend a lot of money doing important investigations and yet your reporters are pummeled for asking the tough questions, yet they are not distributed how they should be,” said Ressa.

“Should it be through TikTok, should journalists be there?” a young woman asked.

“You walked into the biggest debate in Rappler today,” Ressa said in reply, laughing, as she explained how Rappler’s editorial team has built its presence on TikTok despite how she “kept saying but, but!”

Ressa echoed concerns that TikTok, owned by Chinese company ByteDance, has links to Chinese President Xi Jinping’s Communist Party. “I think TikTok is part of a geopolitical power play and we have to be careful with our privacy,” Ressa said. “It has two codes: It kept the spinach for China and exported the opioid to the rest of us.”

Ressa, who built Rappler with the idealism that tech can be used for social good, wrote in her book how she would cringe at past remarks about Facebook, knowing how the platform had damaged democracy today.

“I still think [big tech] should be part of the solution, but not until guideposts are in place,” said Ressa, who added that regulators and civil society must also help each other to stop coded bias. These recommendations are part of a 10-point action plan she crafted with her fellow Nobel laureate, Russian journalist Dmitry Muratov.

“Demand better tech, organize civil society because the impact on the next generation is huge I can’t even begin to quantify it,” said Ressa.

Phillips said that even in the United Kingdom, ordinary people would not know – or care º about how disinformation threatens either their everyday lives or the world they live in.

“So who’s the dictator, Maria?” asked Phillips. “Is it President [Rodrigo] Duterte, or is it Mark Zuckerberg?”

It is both, Ressa said, but also “it is anyone who is a bully.” – Rappler.com