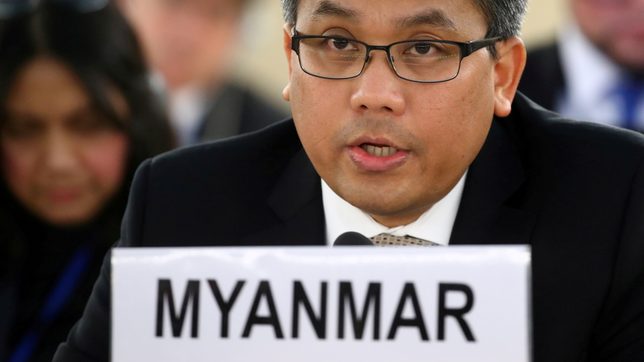 Facebook Twitter Copy URL
Copied
Myanmar's Kyaw Moe Tun has asked to renew his UN accreditation, despite being the target of a plot to kill or injure him

But diplomats said China, Russia and the United States had reached an understanding, where Moscow and Beijing will not object to Kyaw Moe Tun remaining in Myanmar’s UN seat for the moment as long as he does not speak during the high-level meeting.

“I withdrew from the speaker list, and will not speak at this general debate,” Kyaw Moe Tun told Reuters, adding that he was aware of the understanding between some members of the UN credentials committee, which includes Russia, China and the United States.

Myanmar’s junta has put forward military veteran Aung Thurein to be its UN envoy, while Kyaw Moe Tun has asked to renew his UN accreditation, despite being the target of a plot to kill or injure him over his opposition to the February coup.

Dujarric said that “for now, the Afghanistan representative inscribed on the list for Monday is Mr. Ghulam M. Isaczai.” Isaczai is the current UN ambassador, who represents Afghanistan’s government ousted by the Taliban. UN accreditation issues are dealt with by a nine-member committee, whose members include the United States, China and Russia. It traditionally meets in October or November so a decision would not be made in time that would allow Muttaqi to address the high-level General Assembly meeting this year.

Until a decision is made by the credentials committee on both Afghanistan and Myanmar, Isaczai and Kyaw Moe Tun will remain in the seats, according to the General Assembly rules.