Pope Francis greets a girl during the weekly general audience at the Paul VI Hall at the Vatican, April 13, 2022. REUTERS/Yara Nardi

Facebook Twitter Copy URL
Copied
'The present moment leaves us deeply troubled, because it is marked by the forces of evil,' says Pope Francis

VATICAN CITY – Pope Francis said on Tuesday, April 12, that the war in Ukraine was marked by “the forces of evil” because it was leaving in its wake abominations such as the massacre of civilians.

Francis made his comments to participants at an inter-religious pilgrimage of solidarity with the Ukrainian people in Chernivtsi in Western Ukraine organized by the Israeli-based Elijah Interfaith Institute.

“The present moment leaves us deeply troubled, because it is marked by the forces of evil,” he said in the message read on his behalf. 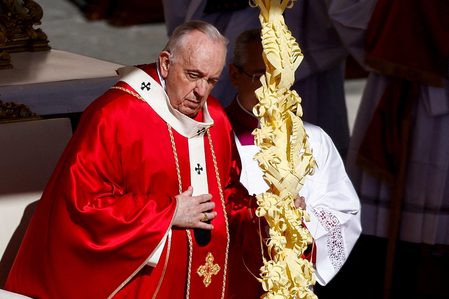 “The suffering inflicted on so many frail and defenseless persons; the many civilians massacred and the innocent victims among the young; the desperate plight of women and children … All this troubles our consciences,” he said.

Russian President Vladimir Putin, a member of the Russian Orthodox Church, has described Moscow’s actions as a “special military operation” in Ukraine designed not to occupy territory but to demilitarize and “denazify” the country.

Francis has rejected that terminology, calling it a war.

The Kremlin says allegations that Russian forces have committed war crimes by executing civilians in Ukraine were a “monstrous forgery” aimed at denigrating the Russian army.

Francis, who has issued many appeals for an end to the conflict, said it was impossible to remain indifferent and that it was necessary “to speak out forcefully in order to demand, in the name of God, the end of these abominable actions”.

At a meeting of the pilgrimage where key members spoke, former Archbishop of Canterbury Rowan Williams echoed the Pope’s recent call for an Easter truce in the conflict.

It was also attended by Jews, Hindus, Muslims, Buddhists and members of other religions.

In his message, Francis urged “government leaders, especially those who appeal to the sacred principles of religion,” to seek peace and shun evil.

Since the war began, Francis has only mentioned Russia explicitly in prayers, such as during a special global event for peace on March 25. But he has made clear his opposition to Russia’s actions, using the words invasion, aggression and atrocities.

During a trip to Malta earlier this month, Francis implicitly criticized Putin over the invasion of Ukraine, saying “potentate” was fomenting conflict for nationalist interests. 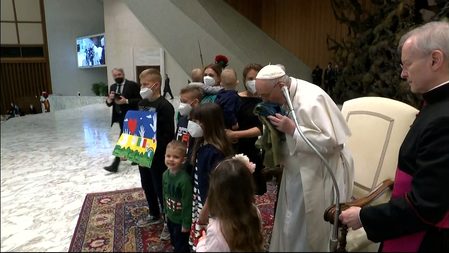