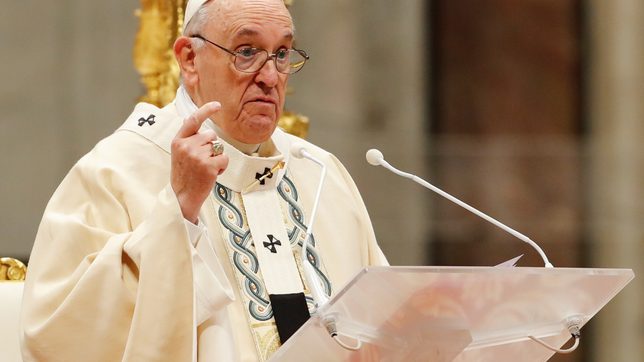 CONCRETE HOPE. In this file photo, Pope Francis leads a mass to ordain bishops at St. Peter's Basilica at the Vatican, on October 17, 2021.

Political leaders must give “concrete hope” to future generations that they are taking the radical steps needed to tackle climate change when they meet at COP26, Pope Francis said in a message released in Friday, October 29.

The United Nation’s COP26 summit runs from October 31 to November 12 in Glasgow, Scotland, and Pope Francis called for a “renewed sense of shared responsibility for our world” to spur action.

“It is essential that each of us be committed to this urgent change of direction,” he said on BBC Radio.

“The political decision makers who will meet at COP26 in Glasgow are urgently summoned to provide effective responses to the present ecological crisis and in this way to offer concrete hope to future generations.” British Prime Minister Boris Johnson has said that the summit is unbelievably important, but the outcome is in the balance as talks will be difficult.

Pope Francis said the summit would be tough, but also represents an opportunity.

“These crises present us with the need to take decisions, radical decisions that are not always easy,” he said.

“At the same time, moments of difficulty like these also present opportunities, opportunities that we must not waste.”

The Vatican is sending a delegation to the summit, but the 84-year-old Pope will not be going following surgery earlier this year.

Pope Francis warned against the danger of isolationism and protectionism in dealing with the climate crisis.

“We can confront these crises by retreating into isolationism, protectionism and exploitation. Or we can see in them a real chance for change, a genuine moment of conversion, and not simply in a spiritual sense,” he said.

“This last approach alone can guide us towards a brighter horizon.” – Rappler.com