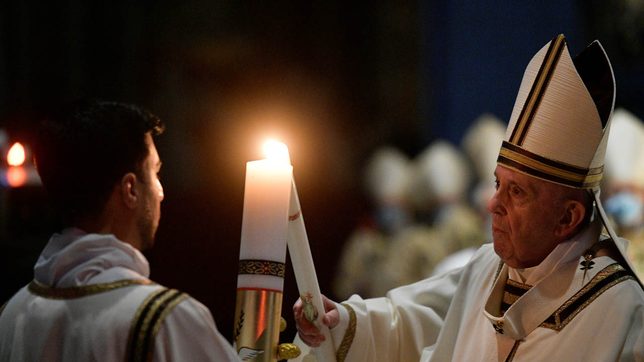 EASTER VIGIL. Pope Francis celebrates the Easter Vigil in a near empty Saint Peter's Basilica as COVID-19 restrictions stay in place for a second year running, at the Vatican, April 3, 2021.

Facebook Twitter Copy URL
Copied
'In these dark months of the pandemic, let us listen to the Risen Lord as he invites us to begin anew and never lose hope,' says Pope Francis

Pope Francis, leading an Easter Vigil service scaled down due to COVID-19, said on Saturday, April 3, he hoped the dark times of the pandemic would end and that people could rediscover “the grace of everyday life.”

This year has been the second consecutive Easter that all papal services are being attended by only about 200 people in a secondary altar of Saint Peter’s Basilica instead of the nearly 10,000 that the largest church in Christendom can hold.

The service began two hours earlier than usual so that participants could get home before a 10 pm curfew in Rome, which, like the rest of Italy, is under tough lockdown restrictions during the Easter weekend.

At the start of the service, the basilica was in darkness except for the flames from candles held by participants to signify the darkness in the world before Jesus. As the Pope, cardinals, and bishops processed to the altar and a cantor chanted 3 times, the basilica’s lights were turned on.

In his homily, Francis, marking the 9th Easter season of his pontificate, said the festival brought with it the hope for renewal on a personal as well as a global level.

“In these dark months of the pandemic, let us listen to the Risen Lord as he invites us to begin anew and never lose hope,” Francis said.

Just as Jesus brought his message “to those struggling to live from day to day,” he said, people today should care for those most in need on the fringes of society.

“(God) invites us to overcome barriers, banish prejudices and draw near to those around us every day in order to rediscover the grace of everyday life,” Francis said. 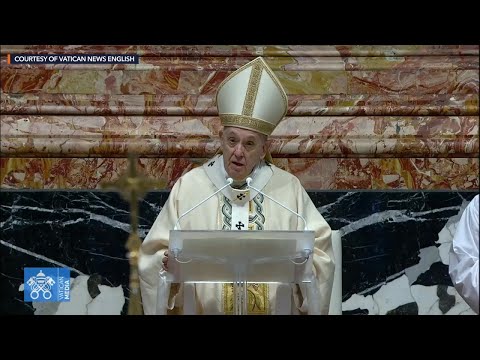 On Easter Sunday, the most important day in the Christian liturgical calendar, the Pope will deliver his “Urbi et Orbi” (To the City and the World) message. – Rappler.com