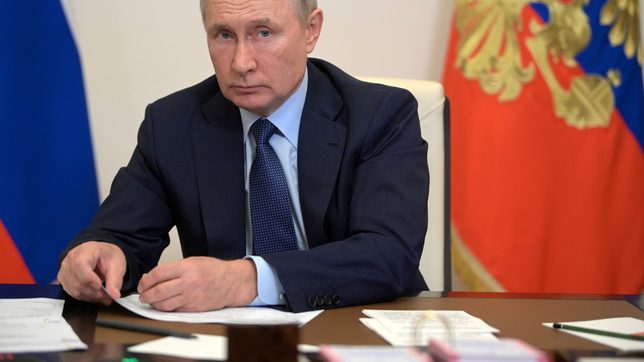 NOT ATTENDING COP26. Russian President Vladimir Putin attends a meeting with members of the government via a video link at the Novo-Ogaryovo state residence outside Moscow, Russia, on October 5, 2021.

Facebook Twitter Copy URL
Copied
Britain, host of COP26 in Glasgow from October 31 to November 12, is seeking support from major powers for a more radical plan to tackle global warming

Russia delivered a blow to hopes of a breakthrough international deal on climate change when the Kremlin said on Wednesday, October 20, that President Vladimir Putin would not fly to Scotland for talks starting at the end of this month.

Putin’s spokesman Dmitry Peskov said he would take part remotely, but the no-show by the leader of the world’s fourth-biggest emitter of greenhouse gases is the latest setback, with Chinese President Xi Jinping and Indian Prime Minister Narendra Modi also uncertain to attend.

Britain, which hosts the 26th United Nations Climate Change Conference of the Parties, or COP26, in Glasgow from October 31 to November 12, is seeking support from major powers for a more radical plan to tackle global warming.

The Kremlin had previously announced that Putin would not attend a Group of 20 summit in Rome in person this month due to concerns about the COVID-19 pandemic.

“He will also not fly to Glasgow, unfortunately,” Peskov told reporters, saying other Russian representatives would go.

“We need to work out in what format it will be possible (for Putin) to speak via video conference, at what moment,” Peskov said. “The issues that will be discussed in Glasgow right now form one of the priorities of our foreign policy.”

Russia is warming 2.8 times faster than the global average, with the melting of Siberia’s permafrost, which covers 65% of Russian landmass, releasing significant amounts of greenhouse gases.

Putin said last week Russia would strive to be carbon neutral no later than 2060. He said hydrogen, ammonia and natural gas were likely to play a larger role in the energy mix in coming years and that Russia was ready for dialogue on ways to tackle climate change.

Before the Kremlin’s announcement, British Prime Minister Boris Johnson told investors on Tuesday, October 19, there would be a good attendance at COP26. “It looks like a lot of people are going to be able to come in person,” he said. – Rappler.com