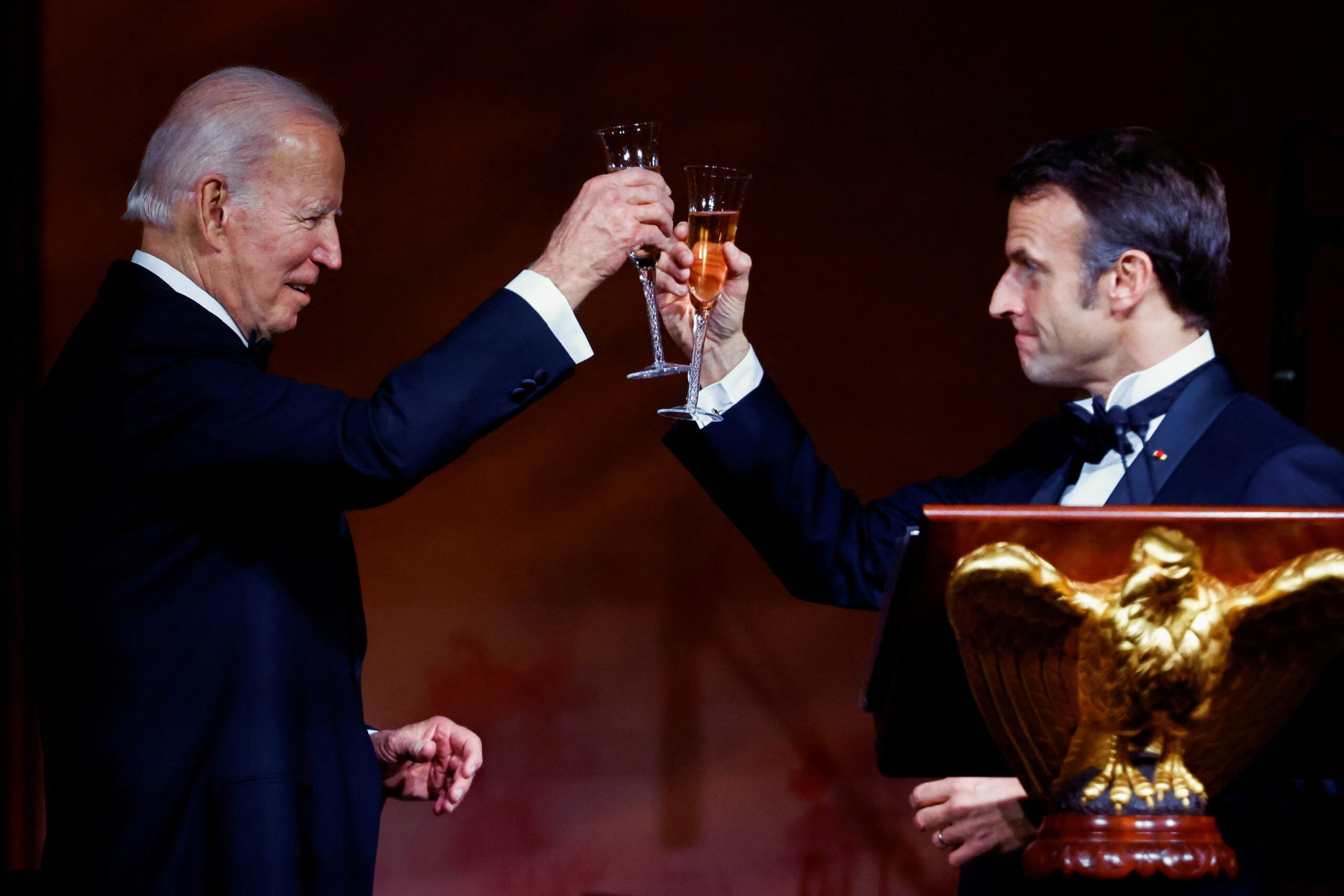 ALLIANCE. US President Joe Biden and France's President Emmanuel Macron toast with their glasses, as the Bidens host the Macrons for a State Dinner at the White House, in Washington, US, December 1, 2022.

Facebook Twitter Copy URL
Copied
Biden and Macron say they are committed to holding Russia to account "for widely documented atrocities and war crimes, committed both by its regular armed forces and by its proxies" in Ukraine

The presidents of the United States and France said they would hold Russia to account for its actions in Ukraine and the European Union reached tentative agreement on an oil price cap to squeeze Moscow’s export earnings.

Western powers are trying to rally support for Ukraine, which is reeling from missile and drone attacks targeting power supply, water and heat in its cities just as winter has set in nine months into Russia’s invasion.

Russia meanwhile accused the United States and NATO of playing a direct and dangerous role in the war, and said Washington had turned Kyiv into an existential threat for Moscow which it could not ignore.

In a bid to reduce the money available for Moscow’s war effort, the European Union tentatively agreed on Thursday on a $60 a barrel price cap on Russian seaborne oil, according to diplomats. The measure would need to be approved by all EU governments in a written procedure by Friday.

US President Joe Biden and French President Emmanuel Macron said in a joint statement, after Oval Office talks on Thursday, that they were committed to holding Russia to account “for widely documented atrocities and war crimes, committed both by its regular armed forces and by its proxies” in Ukraine.

Biden said Washington and Paris “are facing down Vladimir Putin’s grasping ambition for conquest” and “defending the democratic values and universal human rights.”

Biden told reporters he was prepared to speak with the Russian president “if in fact there is an interest in him deciding he’s looking for a way to end the war,” but added that Putin “hasn’t done that yet.”

Macron said he would continue to talk to Putin to “try to prevent escalation and to get some very concrete results” such as the safety of nuclear plants. There are no political talks underway to end the war, which Russia began on February 24 as a “special military operation” claiming its aim was to disarm its neighbor and root out leaders it characterizes as dangerous nationalists.

Ukraine and the West call it an imperialist land grab, which has killed tens of thousands of Ukrainian civilians and soldiers on both sides.

“We will never urge the Ukrainians to make a compromise which will not be acceptable for them, because they are so brave,” Macron said in Washington.

Ukrainian President Volodymyr Zelenskiy, in a video posted on Thursday night, remarked that December 1 was the anniversary of a referendum 31 years ago when Ukraine – then still part of the Soviet Union – voted overwhelmingly in favor of independence.

“Our desire to live freely…will not be broken. Ukrainians will never again be a tiny stone in some empire,” Zelenskiy said.

The stakes have increased in recent weeks as Russia intensified a campaign to knock out power, water, and heat supplies in Ukrainian cities. Ukraine and the West say the strategy deliberately intends to harm civilians, a war crime.

Kyiv Mayor Vitaliy Klitschko on Thursday told residents to stock up on water, food, and warm clothes in the event of a total blackout.

The attacks on infrastructure are likely to increase the cost to keep Ukraine’s economy going next year by up to $1 billion a month, and aid to the country would need to be “front-loaded,” IMF head Kristalina Georgieva told the Reuters NEXT conference on Thursday.

Russian artillery pounded Ukrainian positions in and around the eastern city of Bakhmut, and the regional capital of Kherson in the south, Ukraine’s General Staff said late on Thursday.

Russian forces, having abandoned the city of Kherson in November, are trying to establish defensive positions and are shelling several towns to the north, it said in a statement.

He did not explain how such attacks could achieve that aim.

“We disable energy facilities (in Ukraine) that allow you (the West) to pump lethal weapons into Ukraine to kill Russians,” Lavrov said.

“So don’t say that the US and NATO are not participants in this war – you are directly participating.”

In a sign some channels of communication remain open, Russia’s Defense Ministry and the head of Ukraine’s presidential administration said the two countries swapped 50 service personnel on Thursday. – Rappler.com