Facebook Twitter Copy URL
Copied
Tuvalu's Foreign Minister Simon Kofe says the summit pact should have called for the phasing out, rather than phasing down, of coal use

The South Pacific island nation of Tuvalu is disappointed with the outcome of the UN climate summit in Glasgow, fearing it will fail to hold back global warming and worsen the threat of rising sea levels facing low-lying countries.

Tuvalu’s Foreign Minister Simon Kofe said the summit pact sealed on Saturday, November 13, should have called for the phasing out, rather than phasing down, of coal use, a late change spurred by coal-dependent India and China. Last week, images of Kofe giving a speech to the United Nations COP26 climate summit while standing knee-deep in water where there was once land were widely shared on social media as he sought to show how Tuvalu is battling rising sea levels.

“Hopefully it did convey the reality we face in Tuvalu,” Kofe said.

For Tuvalu, where the highest point is four meters above sea level, any rise in the sea level means parts of some islands will be washed away and other parts will be uninhabitable.

“It’s basically the survival of countries like Tuvalu,” he said. 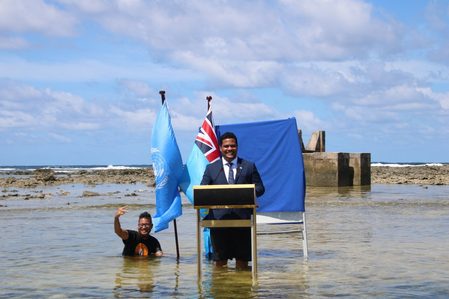 “I think in terms of the pledges, I think there’s reports that are coming out that even with the existing pledges, we’re looking at a 2.4 degrees so I think we would’ve liked to see bigger countries take bigger cuts on their emissions,” Kofe said.

Tuvalu is looking at legal ways to keep ownership of its maritime zones and recognition as a state if the island nation is completely submerged due to climate change. – Rappler.com