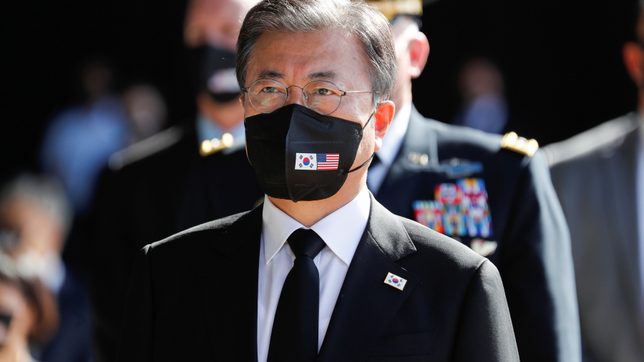 Facebook Twitter Copy URL
Copied
The nine-day Europe trip, which kicks off on October 21, will also include talks in the Vatican with Pope Francis and Vatican Secretary of State Cardinal Pietro Parolin

South Korean President Moon Jae-in will travel to Europe next week to attend a Group of 20 summit in Rome and the UN climate conference in Scotland, his office said on Friday, October 22.

The nine-day trip, which kicks off on Thursday, October 21, will also include talks on October 29 in the Vatican with Pope Francis and Vatican Secretary of State Cardinal Pietro Parolin, Moon’s spokeswoman said.

Moon will then participate in the two-day gathering of G20 leaders in Rome starting October 30, before moving to Glasgow for the COP26 summit set to run from October 31 to November 12.

He then plans to make a state visit to Hungary where he will take part in a summit with the so-called “Visegrad Four” countries, including Poland, Slovakia and the Czech Republic.

COP26 in Glasgow: Who is going and who is not? South Korea is one of the world’s most fossil-fuel reliant economies, with coal making up over 41% of the country’s electricity mix and renewable power just over 6%.

Last year, Moon pledged to go carbon neutral by 2050 and unveiled a Green New Deal to create jobs and boost economic recovery from the coronavirus pandemic. This month he vowed to raise its emissions-reduction goal to 40% of 2018 levels by 2030 from the previous 26.3%.

In the Vatican, both sides want to discuss ways to promote peace on the Korean peninsula and global issues, Moon’s spokeswoman said.

In July, Seoul’s intelligence chief said he was working on a possible visit by Francis to North Korea after Moon relayed a verbal invitation from leader Kim Jong-un during his 2018 meeting with the pontiff.

Officials from the North Korean Embassy in London will join the COP26, the South’s Yonhap news agency reported on Friday, a possible sign that the reclusive country might resume in-person diplomacy after two years of focusing inward amid the COVID-19 pandemic and border closures. – Rappler.com