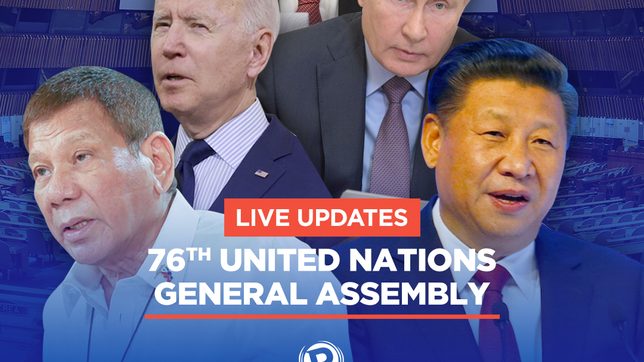 Israel scored a diplomatic victory at the United Nations General Assembly after at least 33 countries boycotted a high-level meeting reaffirming support for the anti-Semitic Durban Declaration.

On Wednesday, September 22, the UNGA adopted a resolution backing the Durban Declaration and Program of Action or Durban IV to mark its 20th anniversary.

This declaration – first signed during the 2001 World Conference Against Racism in Durban, South Africa – was meant to combat racism. But the event was marred by anti-Semitic statements, prompting the United States and Israel to walk out at the time.

The Foreign Ministry of Israel said 33 countries boycotted the UN’s Durban IV conference on Wednesday, among them Israel, US, France, Canada, Australia, and the United Kingdom.

UN Secretary-General Antonio Guterres, however, called out anti-Semitism in his speech during the high-level meeting.

“We see a troubling rise in anti-Semitism… We must condemn without reservation or hesitation the racism and discrimination of growing anti-Muslim bigotry, the mistreatment of minority Christians, and other forms of intolerance around the world,” said Guterres.

President Joe Biden will push world leaders on Wednesday, September 22, to do more to curb the COVID-19 pandemic, and announce a US pledge to buy 500 million more vaccine doses to donate to other countries.

Holding a virtual summit to boost global vaccination rates, Biden hopes to show he is leading by example with the pledge, which will bring US donations to the rest of the world up to more than 1.1 billion doses.

Queiroga will remain in New York in quarantine, the government’s communications office said.

Afghan rapper and activist Sonita Alizadeh fled her homeland with her family when it was last ruled by the Taliban more than two decades ago – when women could not work, had to cover their faces, and girls were banned from school.

She urged world leaders on Tuesday, September 21, to stand up for the rights of women and girls now the Taliban had returned to power.

“What will remain of our people? And what will remain of the 20 years of achievements? Do not be fooled by the masks the Taliban show on the news,” Alizadeh told a virtual event on the sidelines of the annual high-level UN General Assembly.

Talking about the 2016 Arbitral Award at the 76th United Nations (UN) General Assembly, President Rodrigo Duterte said the country is “one with ASEAN and other stakeholders in ensuring that the South China Sea remains a sea of peace, security, and prosperity.”

“The 1982 UNCLOS and the 2016 Arbitral Award on the South China Sea provide a clear path towards a just, fair, and win-win solution for all,” he said in his 15-minute pre-recorded address played before the General Assembly past 5 am (Manila time) on Wednesday, September 22.

President Rodrigo Duterte criticized rich countries for hoarding coronavirus vaccines at the expense of poorer countries like the Philippines that continue to struggle with protecting its population against the deadly virus.

In his last address before the United Nations General Assembly past 5 am (Manila time) on Wednesday, September 22, Duterte did not mince words against the inequitable distribution of COVID-19 vaccines across the globe.

The Philippine President said it is “shocking beyond belief” that several developed nations are now talking of booster shots, while developing countries are considering half-doses just to get by.

With a probe into crimes against humanity looming over him, Philippine President Rodrigo Duterte came out swinging against the United Nations (UN), discrediting it as he warned against any interference into his brutal war on drugs.

The tough-talking Duterte doubled down on his criticism of the UN in his 15-minute pre-recorded address played before the General Assembly past 5 am (Manila time) on Wednesday, September 22.

This was Duterte’s last address before the UNGA as Philippine president. It’s a speech he delivered just days after the International Criminal Court (ICC) decided to open an investigation into his bloody war on drugs.

In his speech before the 76th United Nations General Assembly, President Rodrigo Duterte takes a jab at rich countries for “hoarding” COVID-19 vaccines.

“They now talk of booster shots, while developing countries consider half-doses just to get by,” Duterte says. 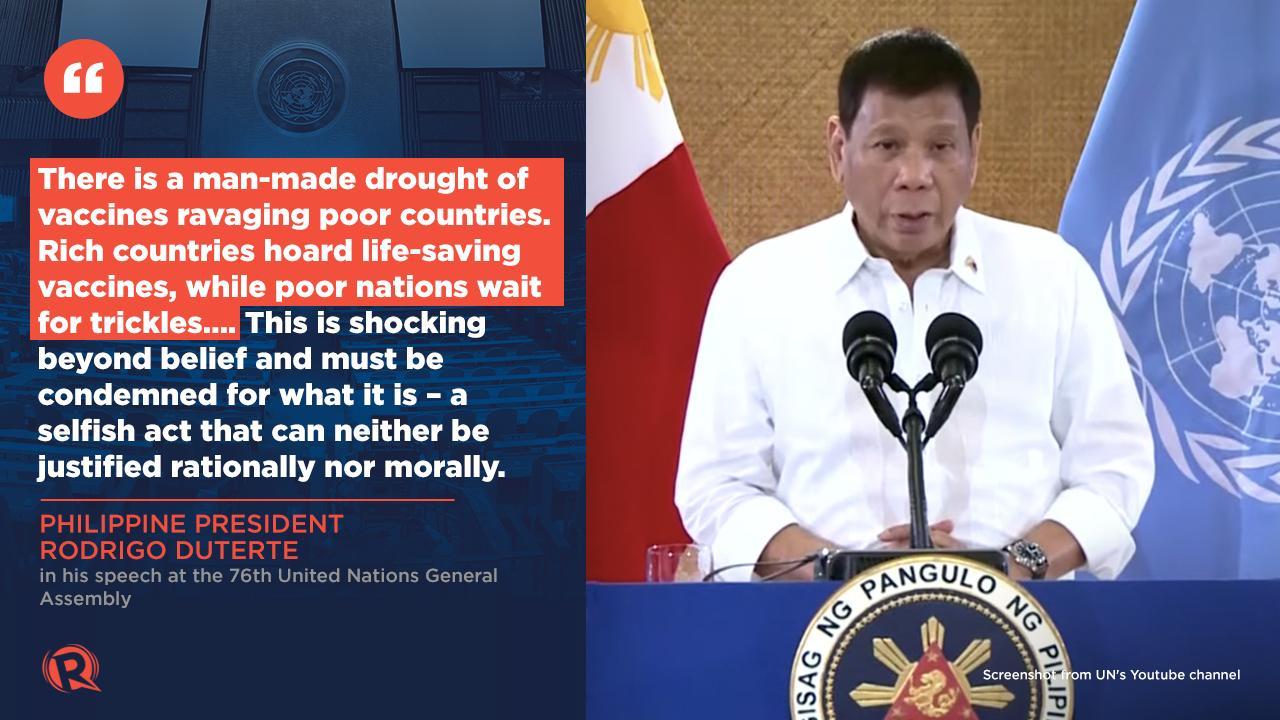