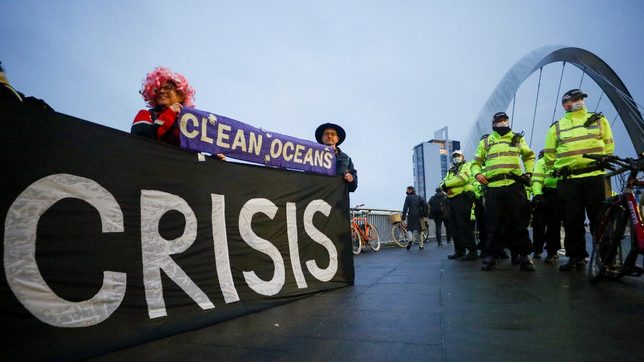 PROTEST. Extinction Rebellion activists hold a banner next to police officers during a protest outside the venue of the UN Climate Change Conference, in Glasgow, Scotland, Britain, on November 8, 2021.

Facebook Twitter Copy URL
Copied
The core task at hand is to agree on the rules for realizing the 2015 Paris Agreement, which aims to keep the average global temperature from rising more than 1.5ºC above pre-industrial levels

With the COP26 deadline closing in, government ministers arrived in Glasgow on Monday, November 8, to attempt to strike a deal on global rules to help keep climate change in check.

But as the second week of the UN talks in Glasgow began, the thorniest issues remained unresolved.

The core task at hand is to agree on the rules for realizing the 2015 Paris Agreement, which aims to keep the average global temperature from rising more than 1.5 degrees Celsius above pre-industrial levels.

Those rules will steer countries’ climate policies for the years to come. And unlike the flurry of new pledges announced last week, the Paris Agreement rulebook is not voluntary.

Striking a deal between the nearly 200 countries that signed the Paris Agreement before the Glasgow talks end Friday, November 12, is a daunting task. Here’s where negotiations stand:

The British hosts of COP26 have said their aim is to keep the 1.5C target within reach.

Climate-vulnerable countries are pushing for a COP26 deal that requires countries to review and, if necessary, update their climate pledges every year, rather than on the current five-year cycle.

The idea is gaining traction. UN Secretary-General Antonio Guterres has backed it. The EU is also open to a yearly progress review, an official told Reuters.

But other countries are opposed to a faster “ratchet,” with some warning that it would strain poorer countries with limited government capacity.

Over the weekend, Britain shared a rough outline for the final political decision countries will publish at the end of COP26. The document said countries must review their climate pledges this decade – but it did not set a timeline. Negotiators are trying to finish rules to create an international carbon market. Put simply, it would allow some countries to pay others to cut emissions – with the aim of pushing much-needed cash into green projects around the world.

The issue, which falls under “Article 6” of the Paris pact, is politically divisive and technically complex. The last two UN climate summits failed to deliver a deal, and delegates expect all-nighters on this issue in Glasgow.

So far, countries have not meaningfully shifted from the positions they held coming into COP26, sources said. That is no surprise at this stage in the talks, which until now have been handled by technical negotiators, who this week hand over the toughest issues to government ministers to wrangle over.

A majority of countries want to ensure the carbon market does not allow “double counting” of emissions cuts – which would occur if both the buyer and seller of an emission reduction credit counted it toward meeting their climate target. Brazil argues that not allowing the credit to be counted by the selling country unfairly penalizes it.

Brazil also argues that countries should be able to sell emissions reduction credits generated under a previous UN system, to count them towards meeting future climate targets. With a huge amount of old credits available, most countries say there is a risk of those old credits flooding the new market, allowing countries to buy them cheaply in lieu of reducing their emissions today.

Vulnerable countries, meanwhile, want a share of the revenue from carbon market trades diverted to a fund for adapting to climate change impacts like floods, drought and rising seas. That is opposed by big emitters including the United States. 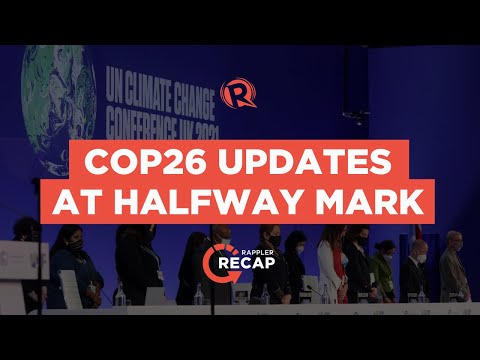 While rich nations say they will meet a pledge for paying $100 billion a year to poorer countries three years late, in 2023, negotiators are already talking about setting a new finance pledge for after 2025.

Trust and patience are in short supply. The missing money is meant to help poorer nations least responsible for causing climate change to cut CO2 emissions and adapt to climate impacts.

“Developed nations are failing us,” Fiji’s Prime Minister Frank Bainimarama told the summit on Monday. “We, the most vulnerable, are told to suck it up and wait until 2023.”

African nations want the financing to be scaled up to $1.3 trillion per year by 2030.

Vulnerable countries also want a new fund to be set up for compensating climate-linked losses and damages incurred by poor nations. Others have urged caution on launching such a fund before the scope of loss and damage liability is clarified.

“We are poking in the dark here,” said Juergen Zattler, director general of Germany’s Ministry for Economic Cooperation and Development. He said more research was needed. “We are open for this discussion. But we should not jump to any kind of solutions too quickly.” – Rappler.com