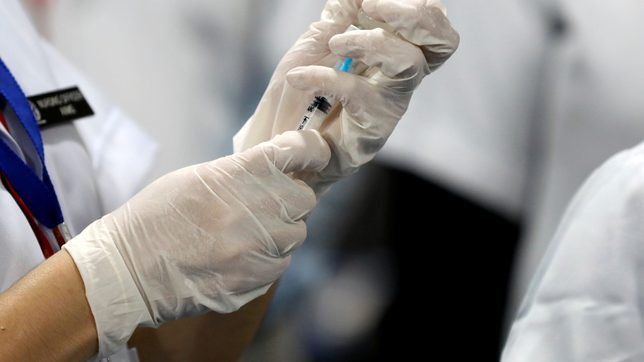 COVAXIN. A healthcare worker fills a syringe with a dose of Bharat Biotech's COVID-19 vaccine called COVAXIN, during COVID-19 vaccination campaign at All India Institute of Medical Sciences hospital in New Delhi, India, on January 16, 2021.

Facebook Twitter Copy URL
Copied
Without a WHO nod, the two-dose Covaxin is unlikely to be accepted as a valid vaccine around the world and would complicate travel plans for tens of millions of Indians who have taken it

The World Health Organization on Monday, October 18, asked for further data from India’s Bharat Biotech to consider the company’s request for an emergency-use listing for its COVID-19 shot, saying the WHO could not “cut corners” in making a decision.

Bharat Biotech, which developed Covaxin with an Indian state research body, started sharing data with the WHO from early July. The vaccine was given emergency use authorization in India in January even before the completion of a late-stage trial, which later found the shot to be 78% efficacious.

Without a WHO nod, the two-dose Covaxin is unlikely to be accepted as a valid vaccine around the world and would complicate travel plans for tens of millions of Indians who have taken it. Covaxin accounts for 11% of the 985.5 million total doses administered in India, and has also been exported.

‘Last year was nothing compared to now’: Learning from India’s second wave “We are aware that many people are waiting for WHO’s recommendation for Covaxin to be included in the #COVID19 Emergency Use Listing, but we cannot cut corners,” the WHO said on Twitter.

“Before recommending a product for emergency use, we must evaluate it thoroughly to make sure it is safe and effective.”

The WHO was expecting “one additional piece of information from the company today,” it added, without specifying.

Bharat Biotech, which has struggled to meet production timelines for Covaxin, did not immediately respond to Reuters requests for comment.

WHO Chief Scientist Soumya Swaminathan said on Sunday, October 17, its technical advisory group would meet on October 26 to consider the listing for Covaxin. He said the WHO’s goal was to “have a broad portfolio of vaccines approved for emergency use & to expand access to populations everywhere.”

India is the world’s biggest producer of vaccines, with a capacity to make more than 3 billion COVID shots a year, mainly the AstraZeneca one. – Rappler.com