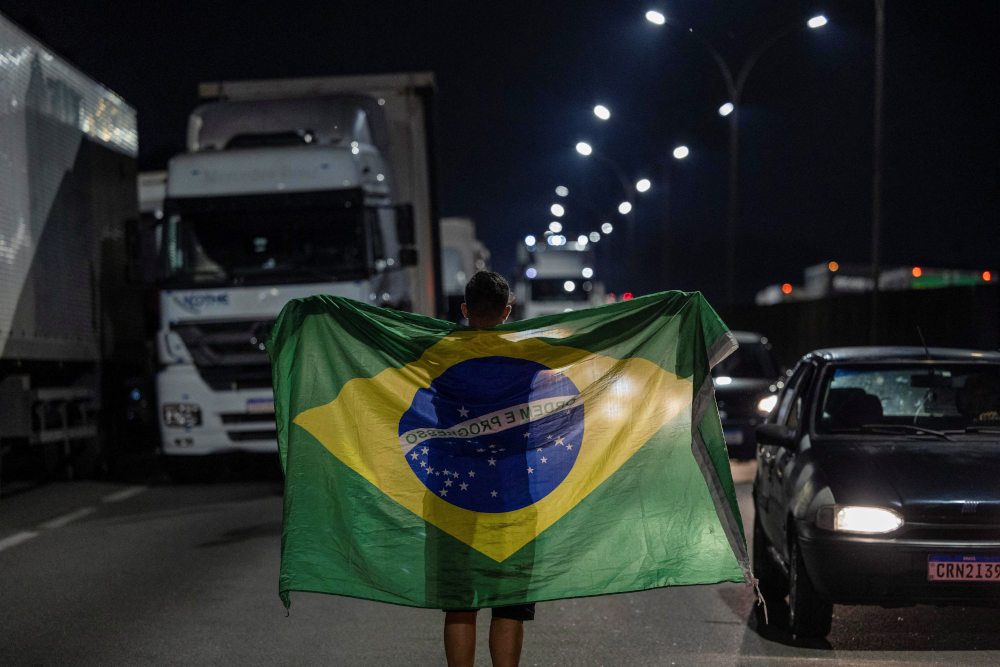 Facebook Twitter Copy URL
Copied
Meanwhile, pro-Bolsonaro truckers block highways across Brazil to protest Lula's victory, with some of them calling for a military coup

BRASILIA, Brazil – President Jair Bolsonaro will not publicly address his defeat in Brazil’s presidential election until Tuesday, November 1, a minister said, amid doubts over whether the far-right nationalist will accept the victory of his leftist rival Luiz Inacio Lula da Silva.

Bolsonaro was holding off on making remarks so he could return to his residence Monday evening and prepare a speech, Communications Minister Fabio Faria told Reuters.

The head of an allied party, Claudio Cajado, had earlier said that Bolsonaro would address the nation on Monday, nearly 24 hours after Brazil’s presidential election was decided.

It was not clear if Bolsonaro would concede defeat, as Cajado said some advisers were encouraging him to do.

Lula’s win represents a stunning comeback for the 77-year-old former metalworker, who governed Brazil from 2003 to 2010 but then spent time in prison for corruption convictions that were later annulled.

Bolsonaro spent Monday at the presidential palace without appearing in public. Prior to the vote he repeatedly made baseless claims the electoral system was open to fraud.

His eldest son, Senator Flavio Bolsonaro, tweeted thanks to his father’s supporters, and said: “Let’s raise our heads and not give up on our Brazil! God is in charge!”

Pro-Bolsonaro truckers blocked highways across Brazil to protest Lula’s victory, with some of them calling for a military coup. Truckers, one of Bolsonaro’s key constituencies, have been known to cause economic chaos in top food exporter Brazil when they shut down highways.

Faria, the communications minister, said Bolsonaro was working with his solicitor general to determine measures to clear the highways.

Some 236 protests had partially or entirely blocked roads in 20 Brazilian states by Monday evening, according to federal highway police. The blockades did not immediately disrupt grain exports.

Lula has vowed to overturn many of Bolsonaro’s policies, including pro-gun measures and weak protection of the Amazon rainforest.

Environmentalists, world leaders and sustainable investors cheered Lula’s victory and his commitment to protect the rainforest and restore Brazil’s leadership on climate change.

Even before he is due to take office on Jan. 1, President-elect Lula will send representatives to next month’s COP27 United Nations climate summit in Sharm El Sheikh, Egypt, allied environmentalist Marina Silva said on Monday.

In his victory speech on Sunday evening, Lula pledged to strongly police illegal logging, mining and land grabbing that have driven the surging destruction of the Amazon rainforest in the past four years under Bolsonaro.

Pitching the contest as a battle for democracy, Lula promised to unite his deeply divided country and celebrated what he called his “resurrection.”

“I will govern for 215 million Brazilians, and not just for those who voted for me,” Lula said at his campaign headquarters. “We are one country, one people, one great nation.”

The Supreme Electoral Court (TSE) declared Lula won 50.9% of votes, against 49.1% for Bolsonaro, who becomes the first Brazilian incumbent to lose a presidential election.

Lula’s win consolidates a new “pink tide” in Latin America, and means the left will govern all the region’s major economies after a string of electoral successes from Mexico to Argentina in recent years.

Argentine President Alberto Fernandez flew to Sao Paulo to meet the president-elect on Monday and hailed “a new era for the history of Latin America. A time of hope and future that begins today.”

But Bolsonaro’s continued silence sparked fears over the handover of power.

International election observers said Sunday’s election was conducted efficiently. One observer told Reuters that military auditors did not find any flaws in integrity tests they did of the voting system.

Markets braced for a volatile week. Brazil’s real currency gained more than 2% against the dollar, while the Bovespa .BVSP was up 0.6% in choppy trading.

Lula’s win was a rebuke for the fiery far-right populism of Bolsonaro, who emerged from the back benches of Congress to forge a conservative coalition but lost support as Brazil ran up one of the worst death tolls of the coronavirus pandemic.

Lula has vowed a return to state-driven economic growth and social policies that helped lift millions out of poverty during his two terms as president.

A former union leader born into poverty, Lula’s presidency was marked by a commodity-driven economic boom and he left office with record popularity.

However, his Workers Party was later tarred by a deep recession and a record-breaking corruption scandal that jailed him for 19 months on bribery convictions, which were overturned by the Supreme Court last year. – Rappler.com