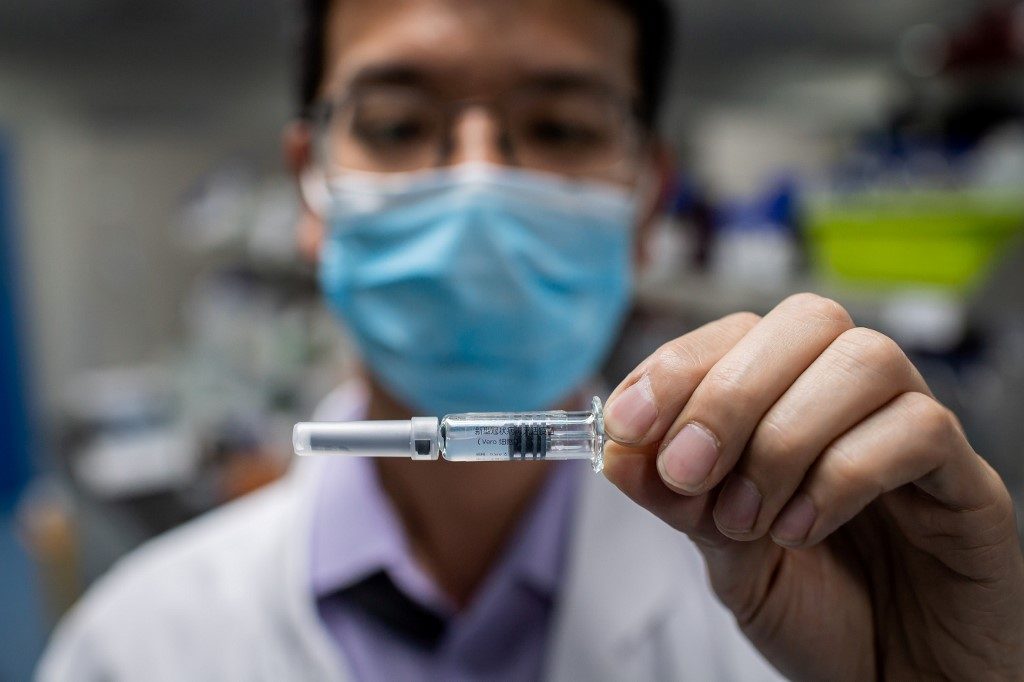 In this picture taken on April 29, 2020, an engineer shows an experimental vaccine for the COVID-19 coronavirus that was tested at the Quality Control Laboratory at the Sinovac Biotech facilities in Beijing. - Sinovac Biotech, which is conducting one of the four clinical trials that have been authorised in China, has claimed great progress in its research and promising results among monkeys. (Photo by NICOLAS ASFOURI / AFP) / TO GO WITH Health-virus-China-vaccine,FOCUS by Patrick Baert

Facebook Twitter Copy URL
Copied
The coronavirus vaccine, developed by private Chinese pharmaceutical firm Sinovac, is the third in the world to enter Phase 3 trials, or large-scale testing on humans – the last step before regulatory approval

Brazil will begin advanced clinical testing of a Chinese-made vaccine against the new coronavirus Tuesday, July 21, issuing the first doses to around 900 volunteers, officials said.

The coronavirus vaccine, developed by private Chinese pharmaceutical firm Sinovac, is the third in the world to enter Phase 3 trials, or large-scale testing on humans – the last step before regulatory approval.

It will be administered to doctors and other health workers who volunteer for the program across 6 states in Brazil, one of the countries hit hardest by the pandemic.

“Trials of CoronaVac, one of the vaccines that has advanced furthest in testing in the world, will begin at the Clinical Hospital of Sao Paulo,” the state’s governor, Joao Doria, told a news conference.

He said initial results were expected within 90 days.

Sinovac is partnering with a Brazilian public health research center, the Butantan Institute, on the trials.

If the vaccine proves safe and effective, the institute will have the right to produce 120 million doses under the deal, according to officials.

In Brazil, we could have the first vaccine to be put to widespread use, which is very, very promising.

“In Brazil, we could have the first vaccine to be put to widespread use, which is very, very promising,” said the head of the Butantan Institute, Dimas Covas.

Brazil is the second-hardest-hit country in the coronavirus pandemic, after the United States.

Its death toll surpassed 80,000 on Monday, July 20, and it has registered 2.1 million infections.

Those grim figures make it an ideal testing ground for potential vaccines, since the virus is still spreading quickly.

Brazil is also helping carry out Phase 3 testing of another experimental vaccine, developed by Oxford University in Britain and pharmaceutical firm AstraZeneca.

They are the 3 most advanced of the dozens of projects worldwide by scientists racing to develop and test a vaccine against the new virus.

A fourth, existing vaccine against tuberculosis is also in Phase 3 trials in Australia as a potential coronavirus immunization. – Rappler.com