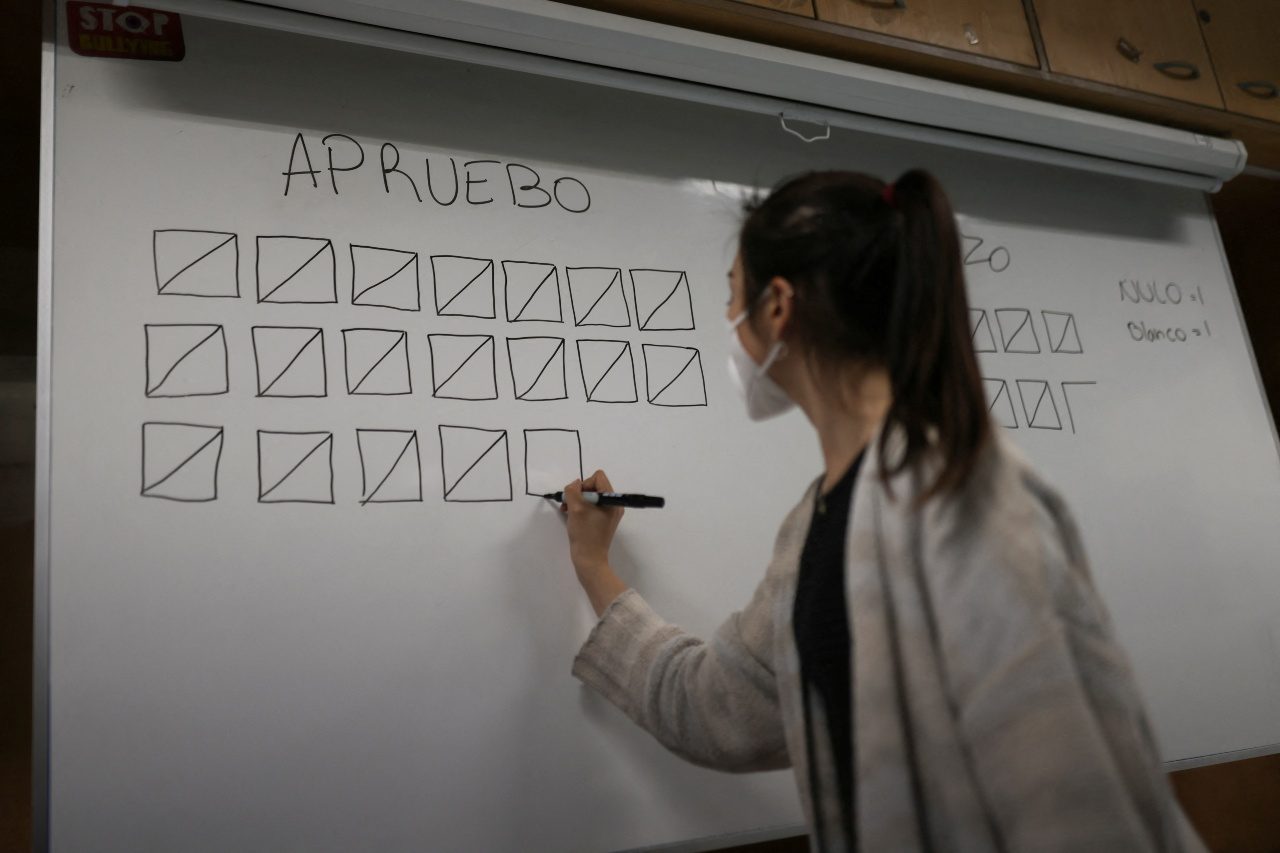 A person keeps record of votes as the count begins at a polling station during a referendum on a new Chilean constitution in Santiago, Chile, September 4, 2022. REUTERS/Pablo Sanhueza

Facebook Twitter Copy URL
Copied
(1st UPDATE) President Gabriel Boric, whose government is largely tied to the new text, says cabinet changes are coming and the government will work to draft another constitution

SANTIAGO, Chile – Chileans overwhelmingly voted against a proposed new constitution on Sunday, September 4, rejecting what would have been one of the world’s most progressive charters.

While nearly 80% of Chileans voted to draft a new constitution in 2020, nearly 62% of voters rejected the new text with 99.74% of ballot boxes counted.

Karol Cariola, spokeswoman for the approval campaign, conceded defeat late on Sunday night in downtown Santiago but said the mandate to draft a new text remains in force.

“We are committed to creating conditions to channel that popular will and the path that leads us to a new constitution,” Cariola said.

President Gabriel Boric, whose government is largely tied to the new text, said cabinet changes were coming and the government would work to draft another constitution.

“We have to listen to the voice of the people. Not just today, but the last intense years we’ve lived through,” Boric said. “That anger is latent, and we can’t ignore it.”

The president said he would work with congress and different sectors of society to draft another text with lessons from Sunday’s rejection.

Center-left and right wing parties that promoted the reject campaign, have also agreed to negotiate to prepare a new text.

“I think there are two things that explain what has just happened. One is a rejection of the Boric government,” political analyst Cristobal Bellolio told Reuters, adding that the other was identity politics in regards to indigenous and other issues.

The proposed text that voters rejected was a response to widespread violent protests that gripped the nation in late 2019 and focused on social rights, the environment, gender parity and indigenous rights, a sharp shift from its market-friendly constitution dating back to the Augusto Pinochet dictatorship.

Nearly 13 million of 15 million Chileans and residents who were eligible to vote cast ballots across more than 3,000 voting centers. These included the national stadium in Santiago, where Rosemarie Williamson, 54, and her mother, 85, voted to reject the new constitution.

Williamson, who had voted ‘yes’ in 2020, cited worries over several proposals.

“The main one is (indigenous) plurinationality and then pension funds,” she said. “I’ve worked my whole life and I’m not willing to share that.”

Diego Uribe, 35, a father of two who does not normally vote because he has lost faith in political parties, voted ‘yes’ in Puente Alto, a lower-income region in southern Santiago.

“This one is different,” Uribe said, noting he would have voted even if it was not mandatory. “Approval is real change for the future, free education, dignified healthcare and more rights.”

The latest polls before a two-week blackout showed rejectors ahead at 47%, compared with 38% for ‘yes’ and 17% undecided, but Sundays result beat polls by wide margin. – Rappler.com