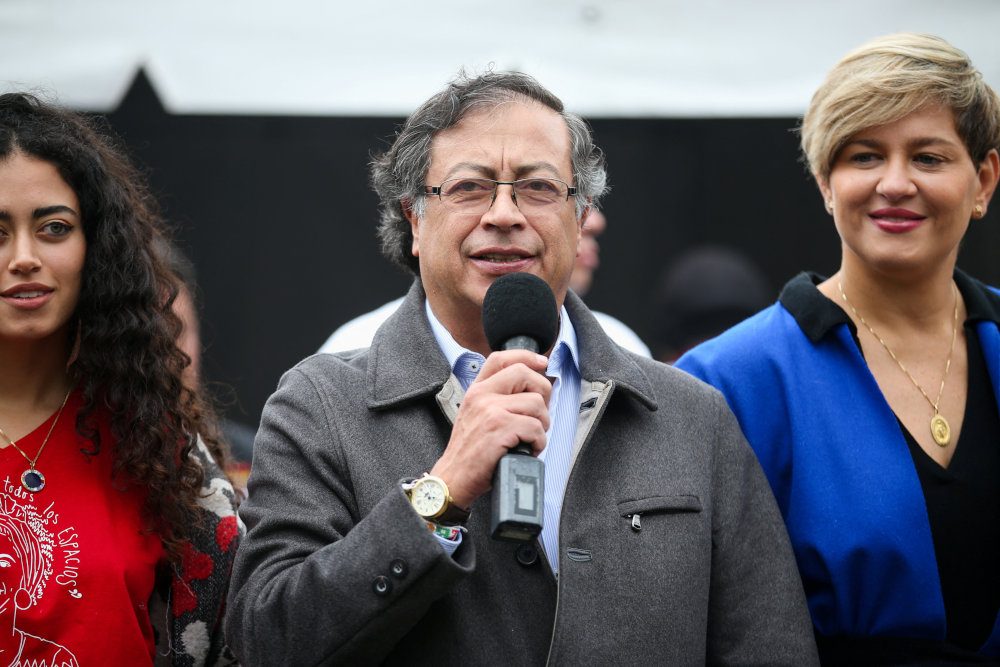 GUSTAVO PETRO. Colombian left-wing presidential candidate Gustavo Petro of the Historic Pact coalition speaks after casting his vote at a polling station, next to his wife Veronica Alcocer and daughter during the second round of the presidential election in Bogota, Colombia June 19, 2022.

Leftist Gustavo Petro, a former member of the M-19 guerrilla movement who has vowed profound social and economic change, won Colombia’s presidency on Sunday, June 19, the first progressive to do so in the country’s history.

Petro beat construction magnate Rodolfo Hernandez with an unexpectedly wide margin of some 720,000 votes. The two had been technically tied in polling ahead of the vote.

Petro, a former mayor of capital Bogota and current senator, has pledged to fight inequality with free university education, pension reforms, and high taxes on unproductive land. He won 50.5% to Hernandez’s 47.3%.

Petro’s proposals – especially a ban on new oil projects – have startled some investors, though he has promised to respect current contracts.

His victory was likely to cause market jitters until his cabinet is announced, analysts told Reuters on Sunday.

Supporter Alejandro Forero, 40, who uses a wheelchair, cried as results rolled in at the Petro campaign celebration in Bogota.

“Finally, thank God. I know he will be a good president and he will help those of us who are least privileged. This is going to change for the better,” said Forero, who is unemployed.

Some people were dancing in the street near Bogota’s largest polling place, despite ongoing rain.

This campaign was Petro’s third presidential bid and his victory adds the Andean nation to a list of Latin American countries that have elected progressives in recent years.

A fragmented congress, where a dozen parties have seats, will act as a check on Petro’s proposals, said Daniela Cuellar of FTI Consulting.

“Colombia’s institutional strength and rule of law appear sufficiently robust for the country to maintain economic stability,” said Cuellar. “Moreover, campaigning is not governing, Petro’s policies will be more moderate.”

“Even if he tries to pass radical reforms, he does not have the congressional support to implement them,” she added.

Petro, 62, said he was tortured by the military when he was detained for his involvement with the guerrillas, and his potential victory had high-ranking armed forces officials bracing for change.

“Today I’m voting for my daughter – she turned 15 two weeks ago and asked for just one gift: that I vote for Petro,” said security guard Pedro Vargas, 48, in Bogota’s southwest on Sunday morning.

“I hope this man fulfills the hopes of my daughter, she has a lot of faith in his promises,” added Vargas, who said he never votes.

Petro has also pledged to fully implement a 2016 peace deal with FARC rebels and seek talks with the still-active ELN guerrillas.

Analysts have said the proposed halt to oil development could send investment elsewhere at a time when Colombia is struggling with low credit ratings, a large trade deficit and national debt which has doubled to 72% of GDP over the last decade.

Oil accounts for nearly half of exports and close to 10% of national income, but Petro argues new projects should be barred for environmental reasons and to move Colombia away from dependence on the industry.

Petro has also promised to increase taxes and royalties on extractive industries and charge major landholders for unproductive land, raising some $5.2 billion. He also proposes to raise up to $3.9 billion by progressively taxing companies.

“We think on Tuesday both interest rates on TES bonds and the exchange rate will depreciate, but we need to see what type of rhetoric Petro gives us, what type of cabinet he’ll give us,” said Sergio Olarte, head economist for Colombia at Scotiabank.

Monday is a holiday in Colombia.

“The magnitude of movements in the coming trading sessions will depend on the economic line that the new president offers,” agreed David Cubides, head economist at Allianz brokerage, who said he expects local market volatility during the next week.

Current President Ivan Duque tweeted he had called to congratulate Petro, and they have scheduled a meeting in coming days to ensure a harmonious transition.

Colombian presidents are limited to one term.

Petro had raised doubts about the integrity of the count after irregularities in congressional tallies in March and earlier on Sunday urged voters to check their ballots for any extraneous marks which could invalidate them.

Hernandez, who served as mayor of Bucaramanga, was a surprise contender in the run-off and ran on anti-corruption promises even though he himself is under investigation for graft. He has denied wrongdoing.

Hernandez, who refers to himself as the ‘king of TikTok’, ran a campaign focused on social media, repeatedly cancelling interviews and barely appearing in public in the 10 days prior to the vote.

He conceded defeat in a short video on social media.

“As I said during the campaign, I accept the results of this election,” Hernandez said, adding he hopes Petro will be loyal to anti-corruption promises.

Dejected Hernandez supporters were throwing away campaign balloons outside his headquarters in Bucaramanga.

Defense Minister Diego Molano told journalists on Sunday afternoon that the killing of an electoral volunteer in Guapi, Cauca province, was under investigation.

Sixty voting locations had to be moved because of heavy rains in some parts of the country, the registrar said.

Some 22.6 million people voted, about 1.2 million more than in the first round. Some 2.3% of voters turned in protest votes, backing neither candidate. – Rappler.com