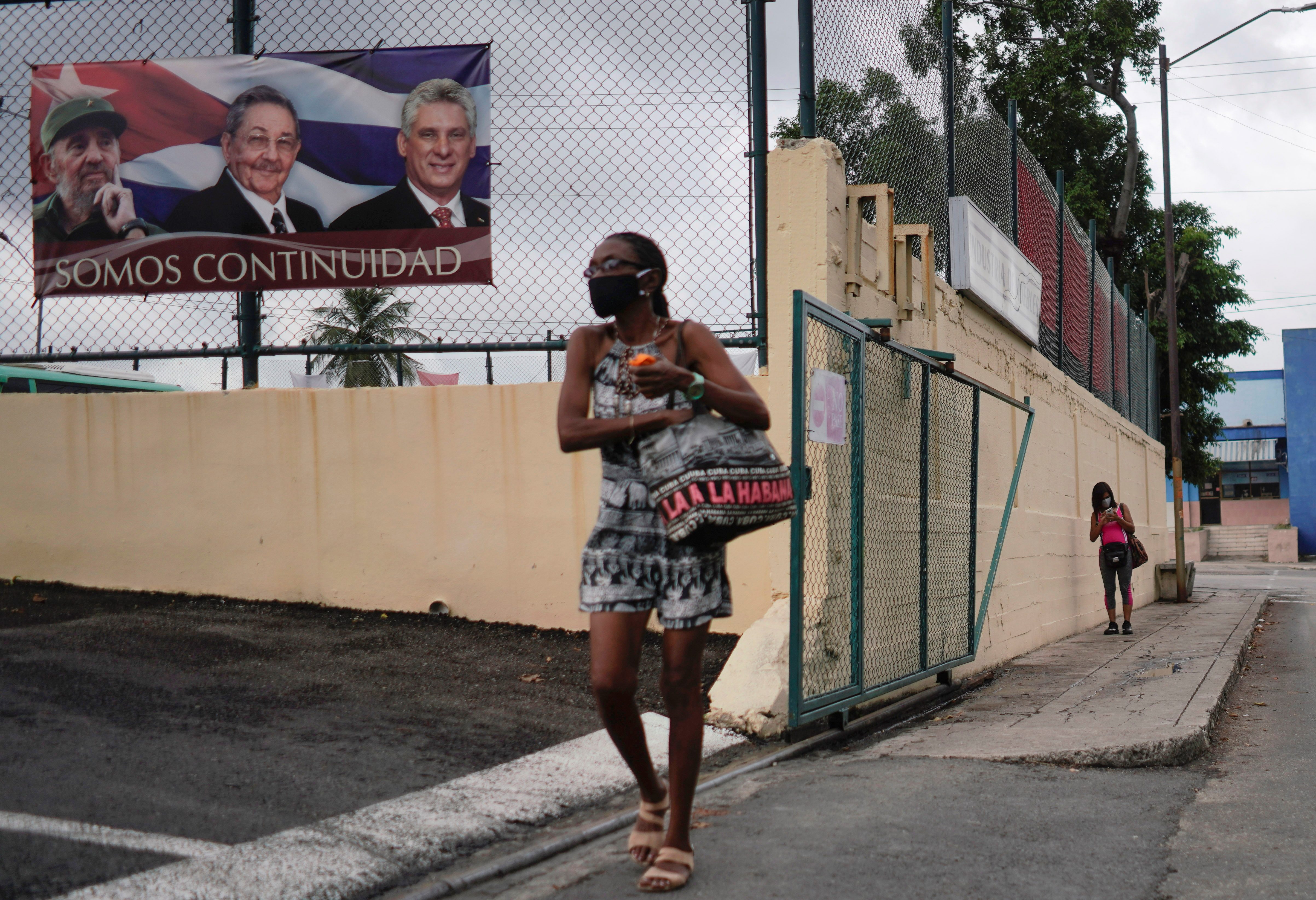 END OF AN ERA. A woman passes by a poster displaying images of late Cuban President Fidel Castro, Cuba's First Secretary of the Communist Party and former President Raul Castro and Cuba's President Miguel Diaz Canel with a sign that reads: "We are continuity", in Havana, Cuba, April 12, 2021. Picture taken April 12, 2021. REUTERS/Alexandre Meneghini

Cuba’s ruling Communist Party elected President Miguel Diaz-Canel to succeed Raul Castro as party first secretary, the most powerful position in the country, on the final day of its congress on Monday, April 19.

The succession marks the end of six decades of rule by brothers Fidel and Raul Castro, who led Cuba’s leftist 1959 revolution, in a transition to a younger generation that worked its way up the party ranks rather than forging itself through guerrilla warfare.

Diaz-Canel, 60, who was born after the revolution and already succeeded Castro as president in 2018, had been widely expected to also take the role of first party secretary.

He has emphasized continuity since becoming president and is not expected to move Cuba away from its one-party socialist system, although he will be under pressure to undertake economic reforms.

US sanctions and the pandemic have exacerbated the woes of Cuba’s already ailing centrally planned economy, with widespread shortages of even basic goods spawning multi-hour lines outside stores across the country.

Discontent is fueling dissent that has been strengthened by the rollout of internet, giving Cubans more platforms to express their frustrations in a country where public spaces are tightly controlled.

“Diaz-Canel is not the fruit of improvisation but of the thoughtful selection of a young revolutionary who has all that is required to be promoted to higher positions,” Castro said in a speech opening the congress on Friday, April 16, his military fatigues contrasting with his protege’s civil garb.

Diaz-Canel was party chief in two provinces before joining the national government as education minister in 2009, and then in 2013 became Castro’s right-hand man.

Hundreds of party delegates gathered – wearing face masks and sitting several seats apart from one another amid the country’s worst COVID-19 outbreak since the start of the pandemic – for the congress that took place in Havana from Friday to Monday.

The event is the party’s most important meeting, held every five years to review policy and elect new leadership.

Castro said at the last party congress in 2016 it would be the last presided over by the so-called historic generation of those who fought in the Sierra Maestra to overthrow the US-backed government of dictator Fulgencio Batista.

The new policy-setting Political Bureau will not include Jose Ramon Machado Ventura, 90, and Ramiro Valdes, 88, two other famous members of that generation. The party has not yet announced who will replace Machado Ventura, a communist ideologue, as deputy party leader. Valdes will remain a deputy prime minister.

The only person from the historic generation to remain on the bureau, reduced to 14 members from 17 previously, is Defense Minister Álvaro López Miera, 77, who fought in the revolution as an adolescent.

The party promoted Luis Alberto Rodriguez Lopez-Callejas, once married to Raul Castro’s daughter Deborah and head of the armed forces’ enterprises which control much of the economy, to the bureau.

Diaz-Canel told delegates on Monday he would consult all strategic decisions about the future of the nation with Raul Castro, according to the Communist Party’s Twitter feed. His speech has not yet been broadcast.

Raul had previously had a similar arrangement with Fidel when he succeeded him, although Raul ended up taking some decisions – for example to open up the economy and reach a detente with the United States – in spite of resistance from Fidel, analysts said. – Rappler.com