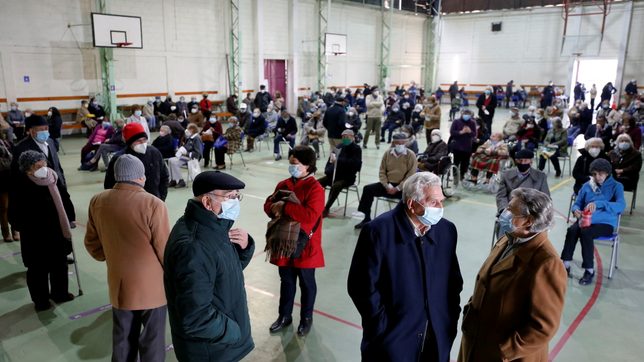 Elderly people wait to receive the Pfizer BioNTech or AstraZeneca COVID-19 vaccine as Chile starts a booster vaccination campaign for those inoculated with the Sinovac vaccine, in Valparaiso, Chile, on August 11, 2021.

Chile on Wednesday, August 11, began administering booster shots to those already inoculated with Sinovac’s COVID-19 vaccine in a bid to lock in early success following one of the world’s fastest mass vaccination drives.

Lines of elderly citizens eager to participate in the campaign began forming at vaccination centers in neighborhoods across the capital Santiago on a cool winter morning in the Southern Hemisphere.

“They arrived very early, like on an election day, very well dressed, very happy,” said Rodolfo Carter, mayor of La Florida on the outskirts of the city. “I think it is a great sign of hope.”

Chile’s blistering campaign has seen upwards of 67% of its population fully vaccinated, predominantly with Sinovac’s CoronaVac. But authorities last week said studies had shown a booster was necessary to shore up immunity. “Studies have shown that precisely at approximately 6 months there is a decrease (of antibodies) and that is why we have decided…to give this booster dose,” Health minister Enrique Paris told reporters.

The South American nation on Wednesday began offering a dose of Oxford’s AstraZeneca vaccine to citizens aged 86 and older who received their initial shots before March 31.

Chile joins the United States, Germany, France and Israel in giving the booster shots, despite a plea by the World Health Organization to hold off until more people around the world can get their first shot.

Dr. Fernando Leanes, a WHO representative in Chile, told Reuters that there was not yet sufficient data to support the use of booster shots.

“With limited supply, you have to consider the global perspective,” Leanes said. “There are countries that have not been able to complete the vaccination of their health workers and that is a danger for all countries.”

Leanes said the WHO was nonetheless in regular contact with Chilean health authorities and otherwise praised Chile’s efforts in research and in donating vaccines to neighboring countries.

Chilean Omar Salazar, 90, was happy to wait in line for his third shot early on Wednesday. He said every little bit counts at his age.

“I think it will help me live a little longer. We will continue the same with the mask and anyway.” – Rappler.com