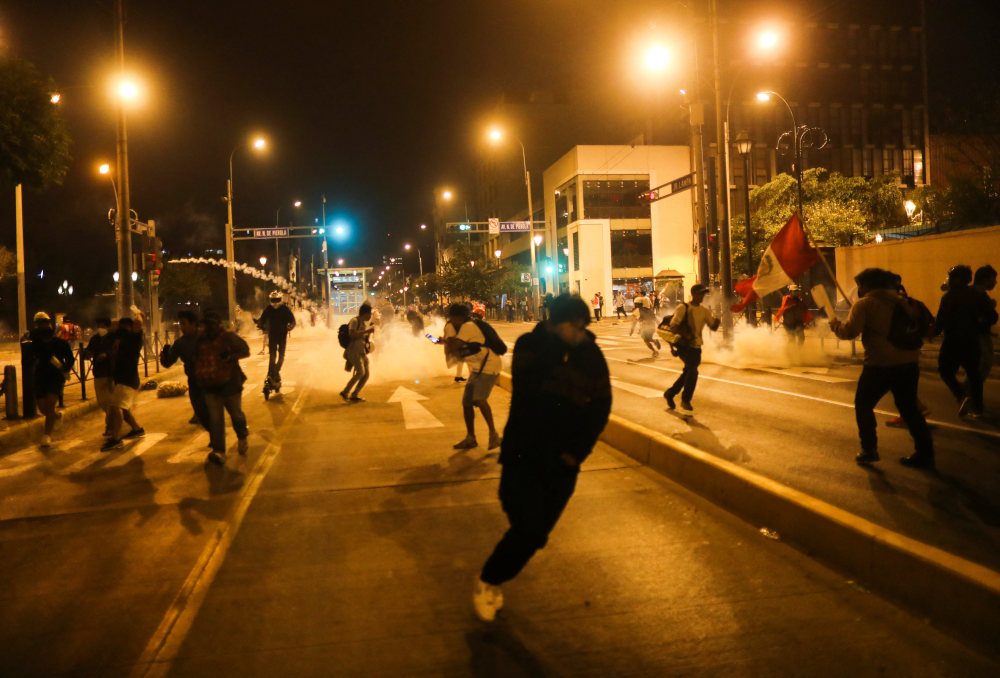 PERU PROTESTS. Demonstrators run from tear gas as they protest to demand the dissolution of Congress and to hold democratic elections rather than recognize Dina Boluarte as Peru's President, after the ousting of Peruvian President Pedro Castillo, in Lima, Peru December 12, 2022.

Facebook Twitter Copy URL
Copied
(1st UPDATE) Peru President Dina Boluarte says she is proposing to move up the next general election to April 2024. It was previously scheduled for 2026.

LIMA, Peru – Peru’s new president offered lawmakers a plan to bring elections forward by two years on Monday, December 12, after the ouster of her predecessor last week sparked protests that have left at least seven dead.

President Dina Boluarte, previously the vice president, was sworn in last week after former President Pedro Castillo was removed by Congress and arrested for trying to dissolve the legislature while preventing an impeachment vote against him.

But Castillo supporters argue that Boluarte was not elected by the people. Demonstrators have taken to the streets to demand that Peru hold new elections, with some also calling for Congress to be shuttered and Castillo released.

The head of the Peru ombudsman’s office, Eliana Revollar, said seven people had died during two days of protests, all from gunshot wounds.

Authorities in Apurimac had earlier Monday reported the death of a 16-year-old and two 18-year-olds, while another death was reported in Arequipa and two teenagers were killed on Sunday.

“These are really are needless deaths,” Revollar told local broadcaster Epicentro, adding that at least 32 civilians and 24 police had been injured.

Citing “difficult times,” Peru’s sixth president in the past five years said she was proposing to move up the next general election to April 2024. It was previously scheduled for 2026.

In a handwritten letter posted to his Twitter page on Monday, Castillo called Boluarte’s early election pledge a “dirty game” and derided her as a “usurper,” calling for an immediate assembly to rewrite the nation’s constitution.

Castillo also said he would not resign as president despite his lawful removal from power. He is being held in a penitentiary center in Lima while he is being investigated by prosecutors for the alleged crimes of rebellion and conspiracy.

The leftist governments of Argentina, Bolivia, Mexico and Colombia issued a joint statement on Monday calling for the protection of Castillo’s human and judicial rights, adding that the “agents” of Castillo’s removal should prioritize “the will of the citizens that was declared at the polls.”

Castillo was elected by a narrow margin last year with Boluarte as his running mate.

Some civil and indigenous groups in the world’s No. 2 copper producer also announced a strike starting on Monday in Apurimac, home to significant mining projects including Las Bambas, a major copper mine owned by China’s MMG.

A source at Las Bambas, which has battled blockades for years, told Reuters it has received more blockade threats amid a “radicalization” of protests against the firm by locals.

A former teacher and peasant farmer, Castillo attracted strong support last year from rural and mining areas. But during the first year of his administration, corruption allegations against him mounted while he presided over unprecedented turnover among senior ministers.

Protests involving hundreds or thousands of people have been held since last week in cities in Peru’s interior and capital Lima, at times turning violent.

The UN Human Rights Office warned of further escalation in a statement on Monday, calling on authorities to exercise restraint and fully investigate the deaths of protesters.

In Apurimac, authorities ordered the airport’s closure after an attack by protesters, and parts of Peru’s main coastal highway was blocked on Monday in Ica and Arequipa.

LATAM Airlines said it had canceled flights to and from the city of Arequipa after reports protesters invaded a runway.

“Dina Boluarte doesn’t represent us. She’s a traitor. She’s incompetent,” said Juan Calle at a march in Lima, calling on the new president to be jailed and Castillo released.

“I have given the instructions so that control of internal order can be recovered peacefully, without affecting the people’s fundamental rights,” said Boluarte, who lamented the deaths. – Rappler.com