Y4iT 2015: Slow yet expensive PH Internet ‘not our fault’ 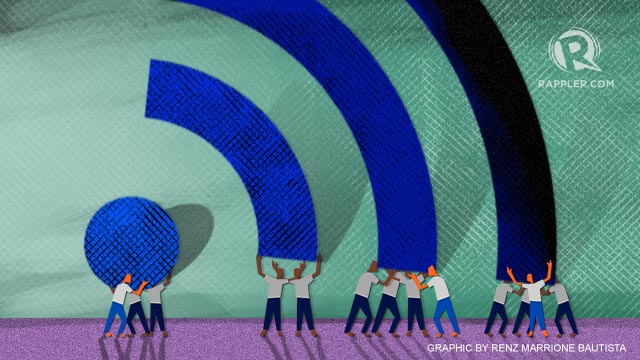 MANILA, Philippines — Our country’s poor Internet connection is not our fault. Do you agree?

This was among the interesting discussions that were shared during the 13th Youth Congress on Information Technology. Mary Grace Mirandilla-Santos, a research fellow at regional information and communication technology (ICT) policy think-tank LIRNEasia, presented this topic in the event, adding that faster Internet speed will help the economy.

“The World Bank has shown that if there’s a 10% increase in broadband penetration in a country, its economy will grow by 1.13%,” Santos, who is also the vice president for policy of Internet Society’s Philippine chapter, said.

She added: “The OECD (Organization for Economic Co-operation and Development) released a study saying less developing economies, if their broadband connection is at least .5 Mbps, could increase its household income by $800 per year.”

Santos helped in researching Internet speeds in the country. According to her research, some claims about Internet connectivity need to be debunked.

“In the definition of our telcos and Internet Service Provides (ISPs), when you use your unli-data to use BitTorrent, it’s your fault that the Internet in the entire Philippines is slow because you’re an abusive user. But they haven’t seen any data to back up that claim,” she stressed.

Citing various studies, Santos also revealed that 80% of all elementary schools or some 38,000 schools nationwide are not connected online.

According to Santos’ study at LIRNEasia, ISPs give us 70% to 80% short of what they promise.

“Ideally, there are more kilobytes per second you receive for every piso you pay. But it shows here that one kilobyte per peso is what we get, which is very low compared to other countries,” Santos explained.

She added: “Of all the ISPs we tested, Philippine ISPs offer the lowest value for money, and that means that Filipino Internet subscribers are paying more for less.”

Why so slow and expensive?

Why is Internet connection in the Philippines so slow and expensive then?

Because there is no real competition, argued Santos. There were a lot of ISPs in the past, but they were slowly bought by major telcos such as Globe Telecom and PLDT. Now, we have less than 10 providers running.

New players are having a hard time entering the market. To provide Internet service, companies must have congressional franchise to operate. To lay out their network, they have to secure permits from local government units and national government agencies.

Another reason, according to Santos, is the lack of interconnection among ISPs. Before PLDT finally signed an agreement to take part in the Philippine Open Internet Exchange (PH OpenIX) for the government hosting service, their traffic is sent abroad and then routed back. The long route costs time, money and quality. (READ: PLDT promises faster loading gov’t websites)

The Philippines also has outdated laws. The Public Telecommunications Act signed in 1995, the Public Service Act signed in 1936, and the charter of the National Telecommunications Commission (NTC) are unable to address the demands and challenges of the fast-evolving broadband age, according to Santos. If there is a violation in the service requirements, they will only be fined P200 per day.

How do we solve it?

As the problem is now rolled out to everyone, what are the government’s ways to solve the problems in the Philippines’ Internet connection?

President Benigno Aquino III said his administration will study whether an oversubscription affects the capacity of telco companies’ infrastructure. Meanwhile, the NTC said government needs to invest in more ICT infrastructure.  As for the the National Economic and Development Authority, it said that ICT development should be included in the Philippine Development Plan.

For Santos, delegating the maintenance of Internet infrastructures to more companies — instead of having only one company doing so — would help build infrastructure that is easily open to new players offering services.

Santos encouraged the youth to talk about the Internet online and offline. She urged them to initiate discussions on social media using the hashtags #PHInternet, #BetterInternet and #TakeBackTheNTC.

Another way young Filipinos can push for the issue is to participate in groups that support better Internet infrastructure such as the Internet Society’s Philippine chapter page, the PHInternet, and the Democracy.net.ph groups on Facebook, Santos concluded. — Rappler.com