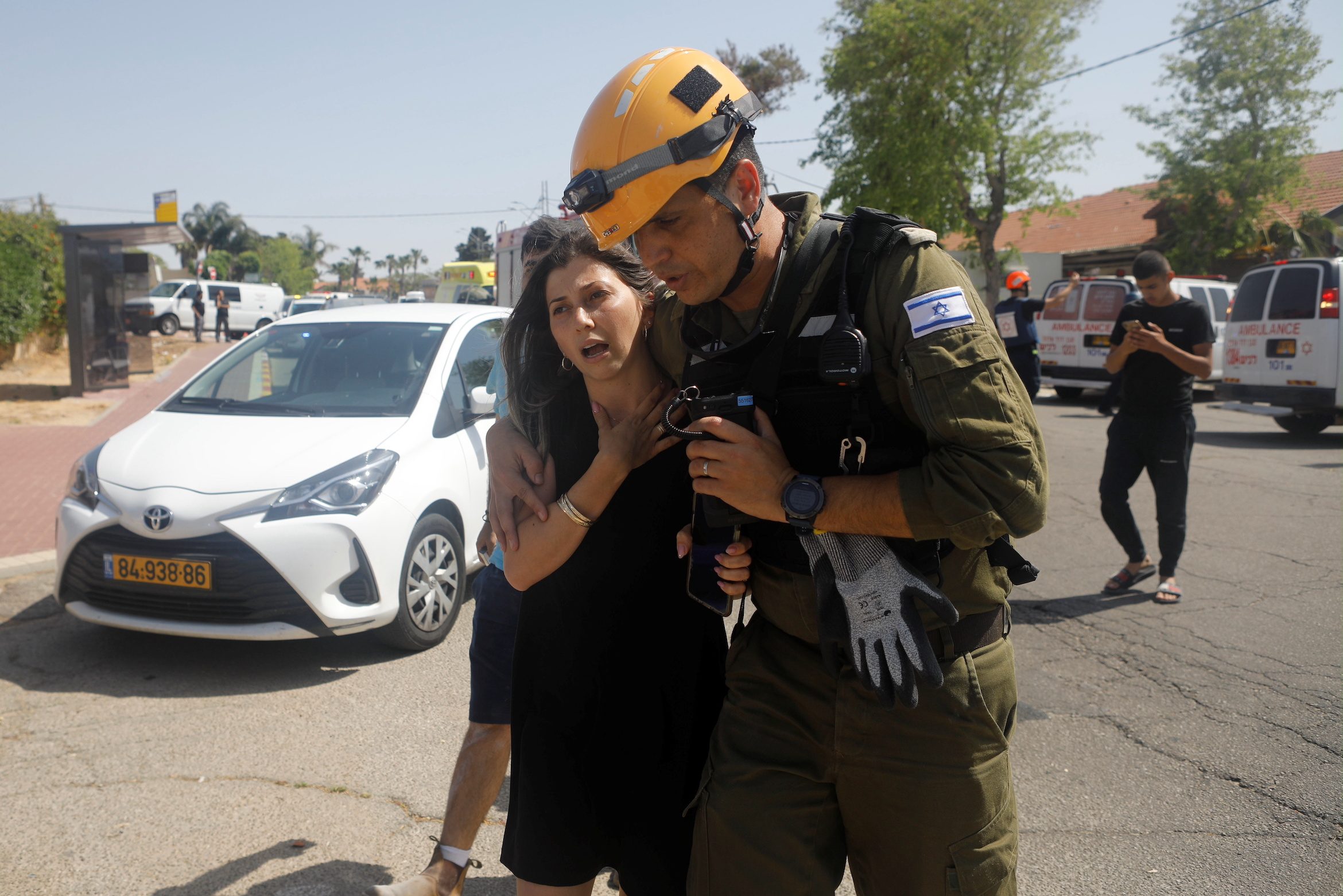 An Israeli soldier evacuates a woman after a rocket launched from the Gaza Strip hit a house in Ashkelon, southern Israel May 11, 2021.

Palestinian militants fired rocket barrages into Israel from Gaza for a second day on Tuesday, May 11, and Israeli warplanes struck the enclave in a deepening conflict in which at least 26 people in Gaza and two in Israel have been killed.

The most serious outbreak of fighting between armed factions in Hamas Islamist-run Gaza and Israel since 2019 was triggered by clashes between Palestinians and Israeli police at Al Asqa Mosque in Jerusalem on Monday.

The holy city has been tense during the Muslim fasting month of Ramadan, with sporadic unrest and possible evictions of Palestinians from homes claimed by Jewish settlers in a court case adding to the friction.

Prime Minister Benjamin Netanyahu said Israel would step up its strikes on Gaza in the face of the surge in rocket attacks.

“At the conclusion of a situational assessment, it was decided that both the strength of the attacks and the frequency of the attacks will be increased,” he said in video statement. The Gaza health ministry said at least 26 Palestinians, including nine children, had been killed and 122 wounded by Israeli air strikes in the enclave of two million people since Hamas on Monday fired rockets towards Jerusalem for the first time since 2014.

In Beit Hanooun town in northern Gaza, Abdel-Hamid Hamad said his nephew Hussein, 11, was killed on Monday in what residents said was an Israeli air strike. He told Reuters the boy was collecting wood when he was hit.

“Gaza has had enough, and nothing makes a difference now. Our children are getting killed. What should we do?” Hamad said.

In Barzilai hospital in Ashkelon, an Israeli woman treated for injuries after her apartment was hit by a Palestinian rocket recalled moments of panic.

An air conditioner fell on her and one of her children during the night and a bathroom door fell on her husband’s head, the woman told Channel 13 TV, which did not give her name.

Israel disputed the Gaza account of casualties in the territory, saying it had killed at least 15 Hamas fighters and that a third of the hundreds of rockets launched by militants had fallen short, causing Palestinian civilian casualties.

In one Gaza neighbourhood, an Israeli missile exploded inside an apartment in a multi-story building, killing three Islamic Jihad members, a militant official said.

Police said more than 30 people were hurt by rocket strikes in southern Israel, though the military said its air defenses were intercepting about 90% of the cross-border launches.

Hamas said that in one five-minute barrage alone, it had fired 137 missiles at Ashkelon and Ashdod, both lying south of Tel Aviv, where several homes were on fire.

A school in Ashkelon was hit by a rocket. Classes had been cancelled in the area and the building was empty.

Israeli tanks massed on the Gaza border as officials said infantry and armor reinforcements were being dispatched.

The Arab League, some of whose members have warmed ties with Israel over the last year, accused it of “indiscriminate and irresponsible” attacks in Gaza and said it was responsible for “dangerous escalation” in Jerusalem.

US Secretary of State Antony Blinken said the rocket attacks from Gaza against Israel should stop immediately. He urged all sides to take steps to reduce tensions.

Egypt, Qatar, and the United Nations were trying to stem the violence, a Palestinian official said

Israel has also seen a spread of pro-Palestinian protests, some violent, among its 21% Arab minority.

In the ethnically mixed town of Lod, witnesses quoted by Israeli media said one or two armed Jews shot at rioting Arabs, killing one and wounding two. The dead man’s father told the Walla news site he had been ambushed while on a family visit.

The accounts could not be confirmed. Israeli police said they had arrested two suspects in the incident.

Israel claims all of Jerusalem as its capital, a status not generally recognized internationally. Palestinians want East Jerusalem – captured by Israel in the 1967 Arab-Israeli war – as the capital of a future independent state free of Israeli occupation.

They have been incensed by Israeli court-ordered evictions there to make way for Jewish settlers. A hearing on the evictions was postponed on Sunday.

The outbreak of hostilities led Netanyahu’s political opponents to suspend negotiations on forming a coalition of right-wing, leftist and center-left parties to unseat him after an inconclusive March 23 election.

Opposition leader Yair Lapid has three weeks left to establish a government. Prolonged fighting could cut into Lapid’s mandate, with a new election – and another chance for Netanyahu to retain power – likely if he fails.

Hamas named its rocket assault “Sword of Jerusalem”, seeking to present itself as the defender of Palestinians in the city.

Such a move undermines the claims of its chief Palestinian rival, President Mahmoud Abbas, to represent all Palestinians. Abbas’s credibility took a blow earlier this year when he first called, then cancelled Palestinian elections. – Rappler.com