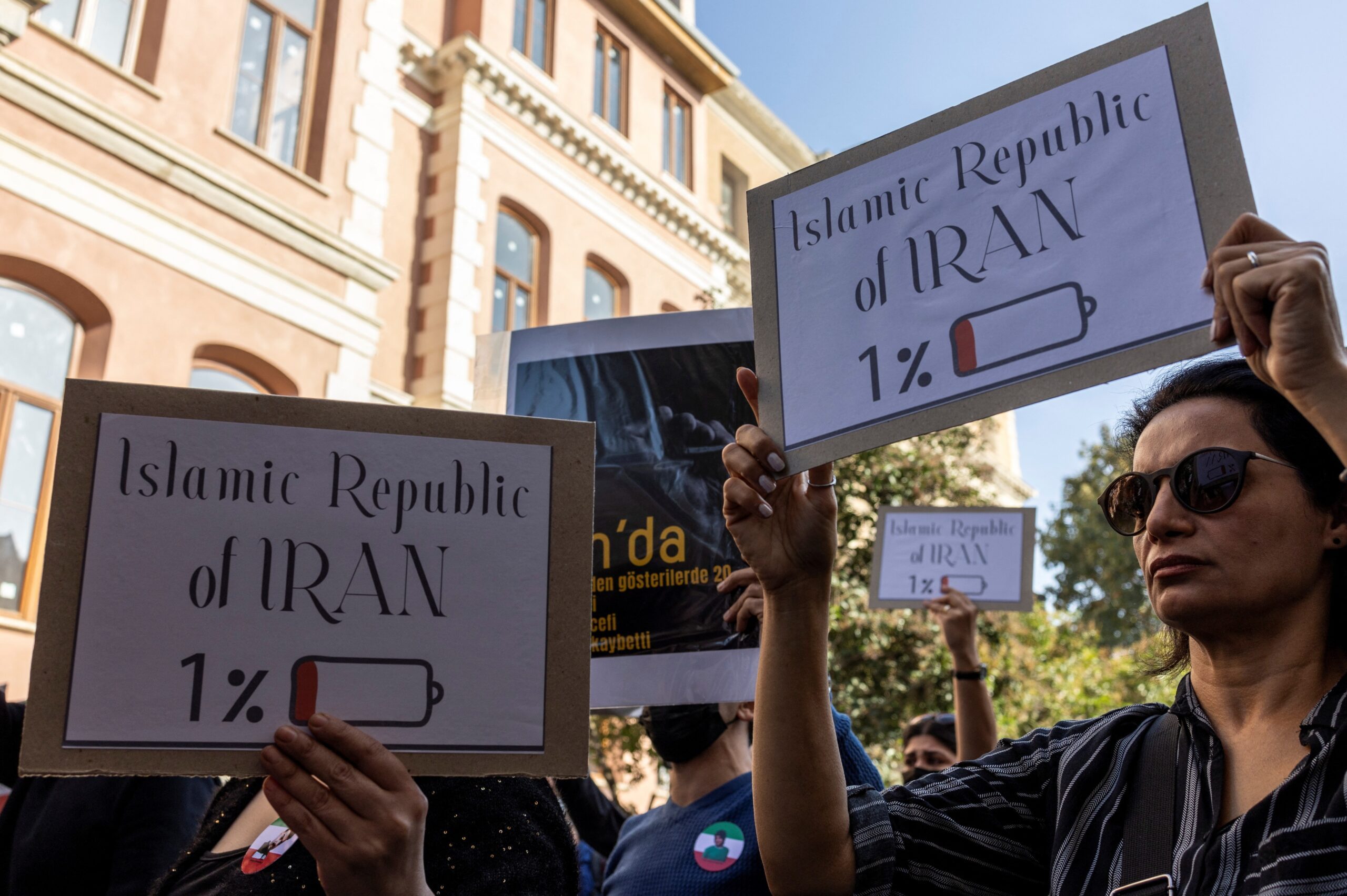 SUPPORT. Members of the Iranian community living in Turkey attend a protest in support of Iranian women and against the death of Mahsa Amini, near the Iranian consulate in Istanbul, Turkey November 4, 2022.

Facebook Twitter Copy URL
Copied
'We ask the judiciary to deal decisively with the perpetrators of these crimes and with all those who assisted in the crimes and provoked rioters,' at least 227 Iranian lawmakers say

DUBAI, UAE – Hardline Iranian lawmakers urged the judiciary on Sunday, November 6, to “deal decisively” with perpetrators of unrest, as the Islamic Republic struggles to suppress the biggest show of dissent in years.

Widespread anti-government demonstrations erupted in September after the death of young Kurdish Iranian woman Mahsa Amini, who had been detained by morality police for allegedly flouting the strict dress code imposed on women.

“We ask the judiciary to deal decisively with the perpetrators of these crimes and with all those who assisted in the crimes and provoked rioters,” 227 lawmakers from Iran’s 290-seat, hardline-led parliament said in a statement, according to state media.

The activist HRANA news agency said that 318 protesters had been killed in the unrest as of Saturday, including 49 minors. Thirty-eight members of the security forces had also been killed, it added.

State media said last month that more than 46 security forces, including police, had been killed. Government officials have not provided an estimate of any wider death count.

Iranian leaders have vowed tough action against protesters they have described as rioters, blaming enemies including the United States of fomenting the unrest.

Demonstrations continued in many cities on Sunday, from Tehran to central city of Yazd, and northern city of Rasht, according to rights groups and videos on social media. Reuters could not verify the rights groups’ reports independently, or the social media posts and footage.

In the Kurdish city of Marivan, rights group Hengaw said security forces opened fire on crowds who had gathered after the funeral of another woman, Nasrin Ghaderi, to protest against her death.

Hengaw said Ghaderi died in a coma on Saturday after suffering severe blows to her head by the security forces while demonstrating in Tehran.

A prosecutor, cited by state media, said Ghaderi had a pre-existing heart issue and had died of “poisoning,” without going into further detail. There was no immediate official comment on the report of gunfire.

Weeks after Amini’s death, a coroner’s report denied Amini had died due to blows to the head while in custody, as claimed by her parents, and linked her death to past medical conditions.

Students in a dozen universities, including in the northern cities of Rasht and Amol, held protests on Sunday chanting “death to Dictator,” a reference to Iran’s top authority Supreme Leader Ayatollah Ali Khamenei, according to the unverified videos on social media. – Rappler.com