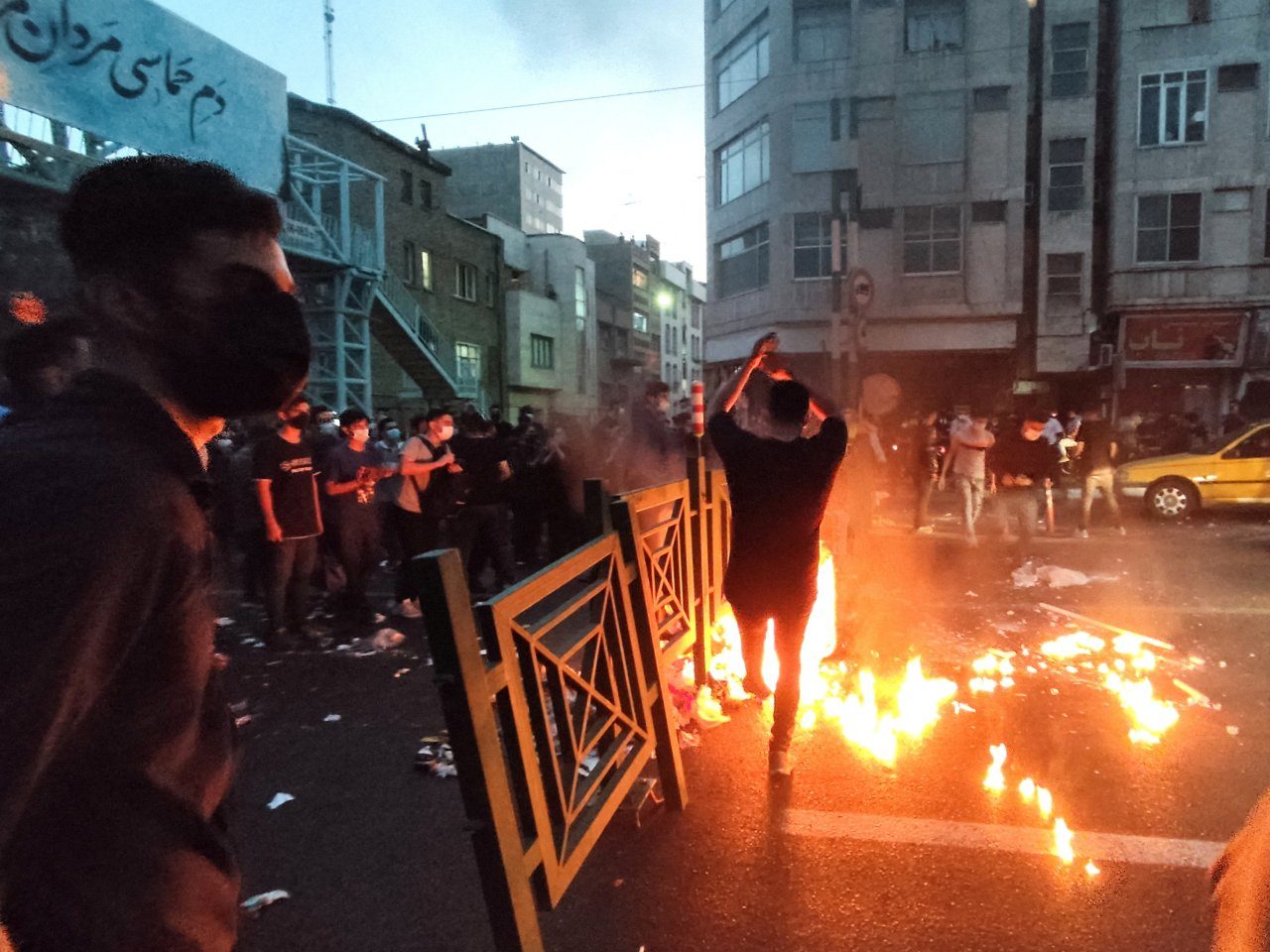 PROTEST. People light a fire during a protest over the death of Mahsa Amini, a woman who died after being arrested by the Islamic republic's 'morality police,' in Tehran, Iran, on September 21, 2022.

Facebook Twitter Copy URL
Copied
Women have played a prominent role in the demonstrations, waving and burning their veils, with some publicly cutting their hair in a direct challenge to clerical leaders

Iranian President Ebrahim Raisi said on Thursday, September 22, that “acts of chaos” are not acceptable, in a warning to protesters who have taken to the streets across the country in fury over the death of a woman in the morality police’s custody.

Speaking at a news conference on the sidelines of the United Nations General Assembly in New York, Raisi added he had ordered an investigation into the case of Mahsa Amini, 22, who died last week after being arrested for wearing “unsuitable attire.”

“There is freedom of expression in Iran … but acts of chaos are unacceptable,” said Raisi, who is facing the biggest protests in the Islamic Republic since 2019.

Women have played a prominent role in the demonstrations, waving and burning their veils, with some publicly cutting their hair in a direct challenge to clerical leaders.

Iran’s powerful Revolutionary Guards called on the judiciary to prosecute “those who spread false news and rumors,” in an apparent bid to take the steam out of nationwide demonstrations.

In a statement, the Guards expressed sympathy for Amini’s family.

The Kurdish rights group Hengaw posted a video where heavy shooting can be heard during a protest and accused security forces of “using heavy and semi-heavy weapons against civilians” in the northwestern town of Oshnavieh.

Reuters could not verify the report.

Protesters in Tehran and other cities torched police stations and vehicles as outrage over Amini’s death showed no signs of abating, with reports of security forces coming under attack.

A video on Twitter account 1500tasvir showed protests in the northwestern city of Bukan with sound of shots in background, as social media posts said demonstrations have spread to most of Iran’s 31 provinces.

Raisi said the extensive coverage of Amini’s case was the result of “double standards.”

“Every day in different countries, including the United States, we see men and women dying in police encounters, but there is no sensitivity about the cause and dealing with this violence,” he said. 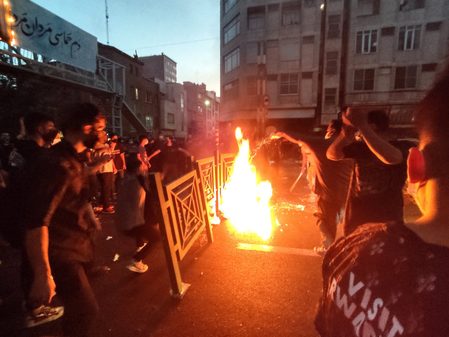 Pro-government protests are planned for Friday, September 23, and some marchers have already taken to the streets, Iranian media said.

The United States on Thursday sanctioned Iran’s morality police, accusing them of abuse and violence against Iranian women and of violating the rights of peaceful Iranian protesters, the US Treasury said.

Most of the unrest has been concentrated in Iran’s Kurdish-populated northwest but has spread to the capital and at least 50 cities and towns, with police using force to disperse protesters. Amini was from the province of Kurdistan.

A new mobile internet disruption was registered in the country, internet monitoring group Netblocks wrote on Twitter, in a possible sign that authorities fear the protests will intensify.

A member of an Iranian pro-government paramilitary organisation, the Basij, was stabbed to death in the northeastern city of Mashhad on Wednesday, September 21, two semi-official Iranian news agencies reported on Thursday.

There was no official confirmation of the death.

Tasnim News Agency also said another member of the Basij was killed on Wednesday in the city of Qazvin from a gunshot wound inflicted by “rioters and gangs.”

Nour News, a media outlet affiliated with a top security body, shared a video of an army officer confirming the death of a soldier, bringing the total reported number of security force members killed in the unrest to five.

In the northeast, protesters shouted “We will die, we will die but we’ll get Iran back” near a police station which was set on fire, a video posted on Twitter account 1500tasvir showed. The account focuses on protests in Iran and has around 100,000 followers.

Reuters could not verify the footage.

Amini’s death has reignited anger over issues including restrictions on personal freedoms in Iran – including strict dress codes for women – and an economy reeling from sanctions.

Iran’s clerical rulers fear a revival of the 2019 protests that erupted over gasoline price rises, the bloodiest in the Islamic Republic’s history. Reuters reported 1,500 were killed.

Protesters this week also expressed anger at Supreme Leader Ayatollah Ali Khamenei. “Mojtaba, may you die and not become Supreme Leader,” a crowd was seen chanting in Tehran, referring to Khamenei’s son, who some believe could succeed his father at the top of Iran’s political establishment.

Reuters could not verify the video.

Reports by Hengaw, which Reuters could not verify, said the death toll in Kurdish areas had climbed to 15 and the number of injured rose to 733. Iranian officials have denied that security forces have killed protesters, suggesting they may have been shot by armed dissidents. – Rappler.com