Iran’s Rouhani: Biden win a chance for US to ‘compensate for mistakes’ A handout picture provided by the Iranian presidency shows the Islamic republic's President Hassan Rouhani chairing a cabinet meeting in Tehran on January 15, 2020. - Iranian people "want diversity", Rouhani said as he urged electoral authorities to refrain from disqualifying would-be candidates for a general election in February. "The people are our masters and we are its servants. The servant must address the master with modesty, precision and honesty," Rouhani said after a cabinet meeting. (Photo by - / IRANIAN PRESIDENCY / AFP) / === RESTRICTED TO EDITORIAL USE - MANDATORY CREDIT "AFP PHOTO / HO / IRANIAN PRESIDENCY" - NO MARKETING NO ADVERTISING CAMPAIGNS - DISTRIBUTED AS A SERVICE TO CLIENTS ===

Iran’s President Hassan Rouhani on Sunday, November 8, said the next US administration has an opportunity to “compensate for its previous mistakes” following Joe Biden’s victory in the presidential election.

“Now there is an opportunity for the future American administration to compensate for its previous mistakes and return to the path of adherence to international commitments,” Rouhani said, in a statement on his official website.

US President Donald Trump, who lost Tuesday’s election to Democratic challenger Biden, has applied a “maximum pressure” policy and crippling sanctions against Iran since his 2018 withdrawal from a landmark nuclear agreement with Tehran.

This US “administration’s harmful and wrong policy for the past 3 years was not only condemned by people all around the world, but was also opposed by the people of (the US) in the recent election,” Rouhani said.

He added that the Iranian people’s “heroic resistance against the imposed economic war” by the Trump administration “proved that America’s maximum pressure policy is doomed to fail.”

Iran’s supreme leader Ayatollah Ali Khamenei said Tuesday that the US election result would have “no effect” on Tehran’s policies towards Washington.

Biden vows to ‘make America respected around the world again’ 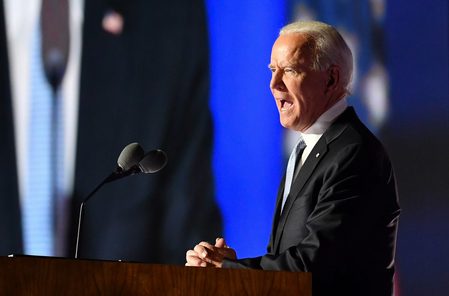 Biden has said during his campaign that he plans to embark on a “credible path to return to diplomacy” with Iran, and raised the possibility of returning to the 2015 nuclear deal, negotiated when he was vice president under Barack Obama. – Rappler.com