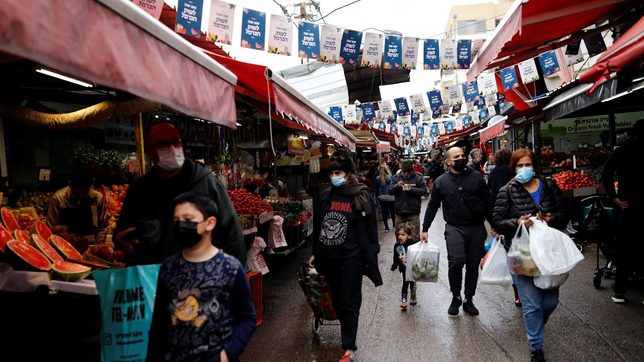 PREPARATIONS. Israelis shop at a food market ahead of the upcoming Jewish holiday of Passover as the country begins to emerge from the COVID-19 pandemic closures due to its rapid vaccine roll-out, in Tel Aviv, Israel, on March 26, 2021.

Facebook Twitter Copy URL
Copied
As they shopped ahead of the Passover holiday's commencement at sunset on Saturday, March 27, some Israelis say they are weary of elections

Israel enters the Passover holiday this weekend much as it has the past two years: in political limbo after inconclusive elections, and with Prime Minister Benjamin Netanyahu’s future on the line.

A final tally from an election on Tuesday, March 23, showed Netanyahu’s right-wing Likud and kindred factions short of a majority in parliament. But his rivals also came up short.

According to the final results published by Israel’s Central Elections Committee, a Netanyahu-led coalition would control 52 seats in the 120-member parliament. An opposition grouping would control 57 seats.

Both Netanyahu and those seeking to topple him were deep in complex coalition arithmetic on Friday, March 26, as Israelis – politically exhausted after four elections in two years – prepared for the March 27-April 3 Passover festival.

Netanyahu’s opponents called for him to step aside and allow a new era to begin.

“For the fourth time in two years, Netanyahu has failed and not succeeded in achieving a parliamentary majority of 61,” Gideon Saar, a Likud defector, wrote on Twitter.

“I call on Netanyahu: move aside, free Israel and allow the country to move forward.”

Saar leads the New Hope party, which won six seats and is looking to persuade Likud supporters that while Netanyahu was their passport to power since 2009, he may now have become an obstacle to them.

By contrast, Netanyahu on Twitter confined himself on Friday to saying that more than a million Israelis had voted for Likud, making it the “largest party in Israel.” He wished Israelis a Happy Passover amid a relaxation of coronavirus restrictions that allowed families to gather at the holiday table.

As they shopped ahead of the Passover holiday’s commencement at sunset on Saturday, March 27, some Israelis said they were weary of elections.

“Passover is supposed to represent our exodus from Egypt, right? So what will it take to get an exodus from this political crisis?” said Ran Peretz, 46, in Tel Aviv.

“Netanyahu is the political equivalent of the ship blocking the Suez Canal,” was the headline of an article in the Haaretz newspaper by commentator Amos Harel.

Netanyahu’s political fate may depend on the leaders of two wild-card parties.

But, complicating the negotiations, some of Netanyahu’s natural right-wing allies have said they will not support him if he partners with Abbas’ United Arab List, which has pro-Palestinian sympathies.

And Netanyahu finds himself for the first time in the recent run of elections without his close US ally President Donald Trump, who made a series of policy changes that aligned closely with Netanyahu.

In an apparent easing of the Trump-era approach, the Biden administration announced on Thursday, March 25, that it will give the Palestinians $15 million to aid their COVID-19 response.

Palestinian Prime Minister Mohammad Shtayyeh welcomed the move as “an important step in the right direction to reshape the relationship with the US administration.” – Rappler.com