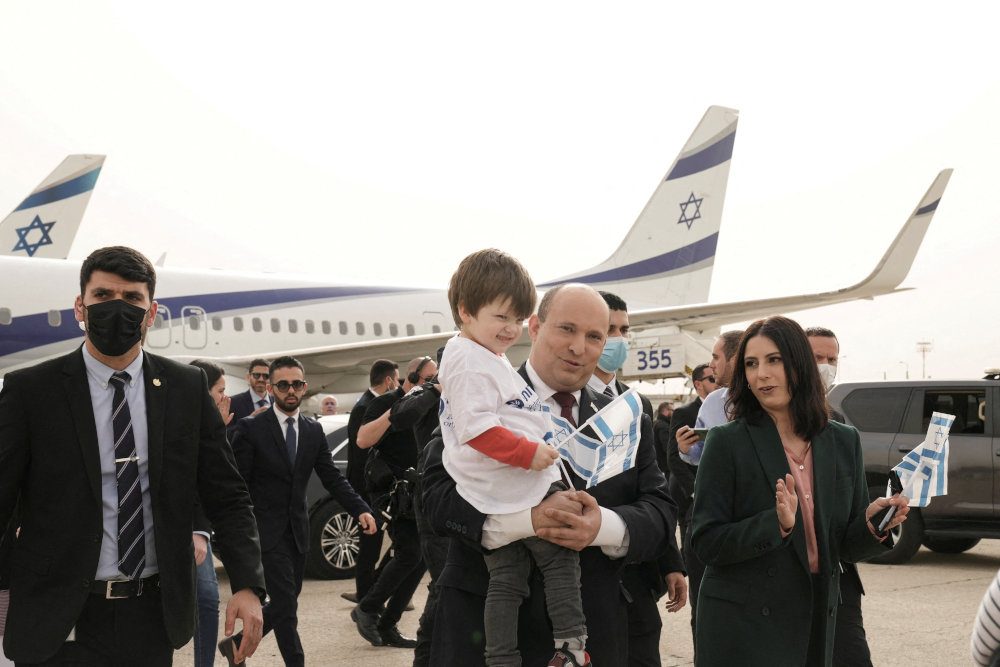 WELCOME. Israeli Prime Minister Naftali Bennett welcomes a group of orphans from the Alumim orphanage in the Ukrainian city of Zhytomyr, following the Russian invasion of Ukraine, upon their arrival at Ben Gurion Airport, in Israel March 6, 2022.

Facebook Twitter Copy URL
Copied
'The moment there is even a small opening, and we have the access to all sides and the capability, I see it as a moral duty to make every attempt.' Prime Minister Naftali Bennett says

Ukraine has requested that Israel serve as intermediary, citing the government’s good relations with both Kyiv and Moscow. Bennett’s office said he had spoken three times over the weekend with Ukrainian President Volodymyr Zelenskiy.

In televised remarks to his cabinet, Bennett gave no details on his three-hour Kremlin meeting with Putin on Saturday, saying only that it had “the blessing and encouragement of all parties” – an allusion to the United States, among other powers.

“We will continue to assist wherever this is requested, even if the chances are not great,” Bennett said. “The moment there is even a small opening, and we have the access to all sides and the capability, I see it as a moral duty to make every attempt.”

The two leaders spoke again by phone on Sunday, the Kremlin said, and discussed Bennett’s “most recent contacts with leaders of a number of countries.”

In parallel, Bennett spoke with the leaders of Germany and France while his foreign minister, Yair Lapid, was due to meet US Secretary of State Antony Blinken on Monday in Riga, according to Israeli officials.

Israel has condemned the Russian invasion of Ukraine, expressed solidarity with Kyiv and sent humanitarian aid. But Bennett has not met Ukrainian requests for military assistance and has kept channels open to Russia, with which Israel coordinates its operations against Iranian deployments in Syria.

Some 90 children from a Jewish orphanage in the Ukrainian city of Zhytomyr were flown from Romania to Tel Aviv on Sunday.

“I am Naftali, the prime minister of Israel,” Bennett, who boarded the El Al plane after it landed, told one boy, kissing him on the head before leading him off the aircraft.

On Twitter, Bennett said the group, accompanied by members of Chabad-Lubavitch, a worldwide Jewish religious movement, had been fleeing battles and shelling for more than a week.

Interior Minister Ayelet Shaked said Israel, which has a population of 9.2 million, was bracing for a “very, very big wave” of immigration sparked by the conflict.

This could entail taking in more than 200,000 Ukrainians who are Jewish or have Jewish family links and more than 600,000 Russians in the same categories, she said.

An Israeli immigration official, who spoke to Reuters on condition of anonymity, had a more modest forecast of an influx “in the low tens of thousands” from Ukraine and Russia.

In what local media have cast as a bid to prevent Russian oligarchs from fleeing to Israel to evade sanctions, the Israel Airports Authority said it had received instructions not to allow private jets to park for more than 24 hours. – Rappler.com