Jordan's King Abdullah II meets with the Israeli Defence Minister Benny Gantz in Amman, Jordan March 29, 2022. Jordanian Royal Palace/Handout via Reuters ATTENTION EDITORS - THIS IMAGE HAS BEEN SUPPLIED BY A THIRD PARTY. NO RESALES. NO ARCHIVES

Facebook Twitter Copy URL
Copied
The meeting follows a two-day summit in Israel attended by the foreign ministers of the United Arab Emirates, Bahrain, Morocco and Egypt and US Secretary of State Antony Blinken

Their talks focused on “regional and security challenges”, an Israeli statement said.

The meeting followed a two-day summit in Israel attended by the foreign ministers of the United Arab Emirates, Bahrain, Morocco and Egypt and US Secretary of State Antony Blinken. While the Arab ministers, in a display of concern by US allies over Iran, convened in Israel, King Abdullah paid a rare visit on Monday to the occupied West Bank, where he held talks with Palestinian President Mahmoud Abbas.

The monarch’s visit was widely seen as an attempt to avert any flareup in the West Bank and East Jerusalem before the Muslim holy month of Ramadan and the Easter and Passover holidays next month – a volatile period in the past.

In Amman, Gantz discussed “the measures that Israel is planning to take in order to enable freedom of prayer in Jerusalem and Judea and Samaria,” an Israeli statement said, using Biblical names in referring to the West Bank.

It did not elaborate on any steps Israel might take to facilitate worship in Jerusalem, the site of Al-Aqsa mosque, a friction point where confrontations between Palestinians and Israeli forces could trigger wider conflict.

Citing security concerns, Israel has imposed age limits on Muslim worshippers at Al-Aqsa during periods of tension and restricted Palestinian travel to Jerusalem from the West Bank, territory that it captured, along with the eastern part of the holy city, in a 1967 war. 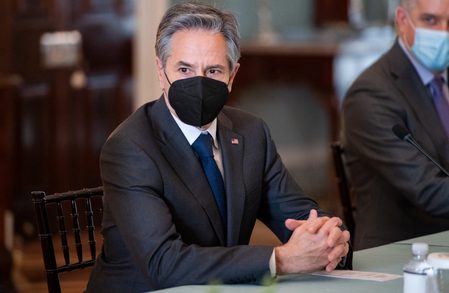