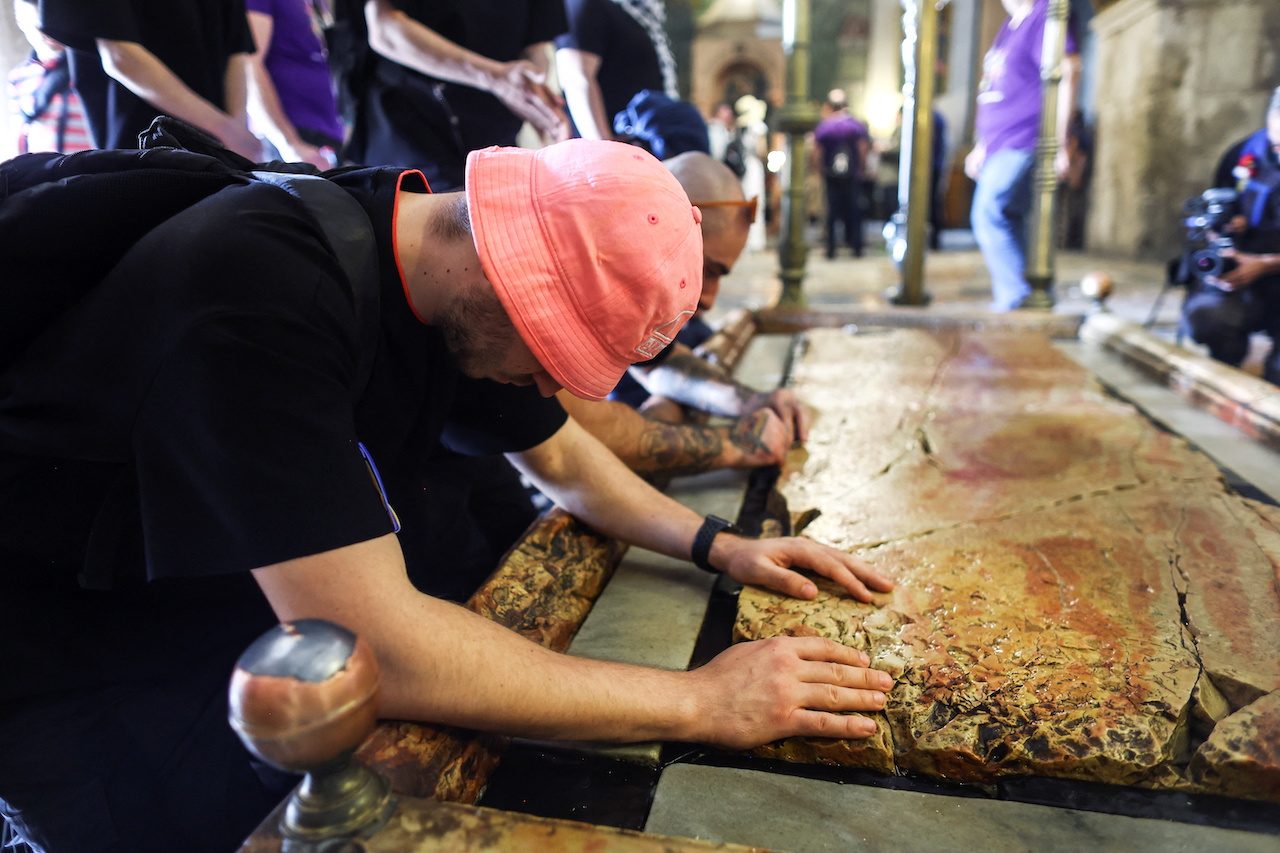 Members of the Kalush Orchestra, Ukraine's representative for the 2022 Eurovision Song Contest touch the Stone of Anointing at the Church of the Holy Sepulchre during a tour in Jerusalem's Old City, April 6, 2022. REUTERS/Ronen Zvulun

Facebook Twitter Copy URL
Copied
After two years of COVID-19 travel restrictions, worshippers are once again able to light candles and kneel at the marble Stone of the Anointing, where it is believed Jesus's body was prepared for burial

JERUSALEM – Prayers in Arabic and Latin echoed in the rotunda of Jerusalem’s Church of the Holy Sepulchre on Sunday, April 10, as Christians from around the world were once again able to attend Palm Sunday mass after two years of COVID-19 travel restrictions.

Around 500 worshippers passed through the huge wooden doors of the church that is the focus of the most important festival in the Christian calendar as the site where Jesus is believed to have been crucified and resurrected.

“After two years of COVID, of restrictions, of closed churches, today we are in a normal atmosphere. We have a lot of pilgrims, a lot of local Christians. We are very happy. For us, it’s a kind of resurrection,” the Latin Patriarch of Jerusalem, Pierbattista Pizzaballa, told Reuters.

Worshippers rattled palm fronds, a traditional gesture to remember the branches laid down by the crowds welcoming Jesus to Jerusalem as recorded by the gospels. The day marks the start of Holy Week for Roman Catholics.

“There’s no better place to celebrate Holy Week, seeing that this is where all the events originally took place, and also seeing as the COVID-19 pandemic is mostly resolving, so it’s safe enough to come this year,” said Joseph Obiajulu, 26, from New York City.

Israel has only recently started to allow foreign tourists to enter the country again.

Holy Week is usually the high season for Christian pilgrims, but on Sunday, there was only about 20% of the number of worshippers that normally fill the church, said Athanasius Macora, a Franciscan monk in his 23rd year as secretary of the commission that negotiates disputes among the churches with claims to the Church of the Holy Sepulchre.

“Normally, where I am, we would have had seven to 10 groups a day, and now we’re averaging two,” he said.

“It’s very exciting and full of emotions,” said Patricia Mercader, 20, from Spain. “Standing where he stood and feeling what he felt, there’s no words to explain it.”

Worshippers lit candles and knelt at the marble Stone of the Anointing, where it is believed Jesus’s body was prepared for burial.

The Holy Sepulchre lies at the heart of the Old City’s Christian Quarter in East Jerusalem, which Israel captured in a 1967 war and later annexed. The Armenian, Catholic and Greek churches share custody, and the Coptic and Syrian churches have rights.

The return of overseas tourists has not yet been in large enough numbers to restore business in the quarter.

“About 20 years ago, we couldn’t even get any sleep during this month,” said Modar Natshe, a shop owner in the Old City.

“We would earn almost as much as the rest of the year in this one month. Now, nothing. We have forgotten that there are holidays, that’s how bad it is.” – Rappler.com